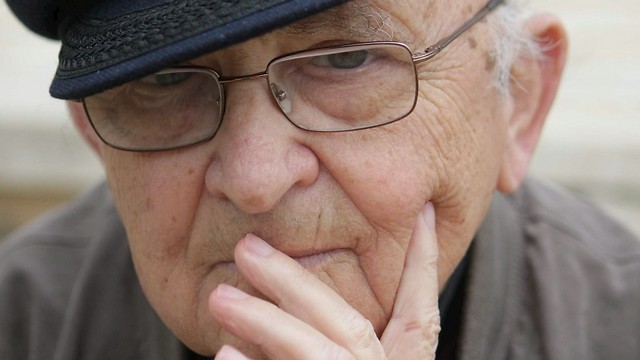 Appelfeld, a Holocaust survivor who immigrated to Israel in 1946 and became a prolific novelist and recipient of national and international awards, passes away at 85.

Renowned Israeli author Aharon Appelfeld, one of the most prominent international figures on Holocaust literature, passed away in the small hours of Thursday morning at age 85. He is survived by his wife and three children. A prolific writer until his final days, Appelfeld was the author of dozens of books and novels, the last of which was published only three months ago.

Born in the former Kingdom of Romania in 1932, Appelfeld survived the Holocaust before eventually settling in Israel. At age nine, he was incarcerated in a Nazi concentration camp of Transnistria with his father after his mother was murdered by the Nazis.

At age 10, he escaped and spent three years hiding in forests in Ukraine.

(Photo: Alex Kolomoisky)
He was eventually separated from his father and forced to wonder what was then then Ukraine until he immigrated to Israel in 1946. There, he studied in an agricultural school in Ein Kerem and later fought in the 1948 War of Independence. He was reunited with his father in 1957, who passed through the horrors of the Nazi Final Solution and followed in his son’s tracks to settle in Israel. Appelfeld’s career in writing had its genesis in his youth when he would write novels and songs which were first published in Israeli newspapers at the beginning of the fifties. In 1959, one of his novels appeared in widely-read newspapers and his first collection of stories “Ashan” (Smoke) made its debut on the bookshelves when it was published in 1962. His published works were almost entirely centered around his experiences in the war, the first years of the burgeoning State of Israel and the Holocaust. Another common motif of his writing also focused on difficulties and dilemmas facing young Jews at the beginning of the 20th century, torn between safeguarding the traditions of their parents and embracing the modernity of Europe.

(Photo: Alex Kolomoisky)
Appelfeld established his reputation as a literary giant before the completion of his grand total of 47 published books, all of which earned him his place in the world of Israeli literature as a pioneer of the modern Hebrew language. While all his books contain a significant biographical component, in 1999 he published his autobiography in Hebrew, which was later translated into English—The Story of a Life: A Memoir. Appelfeld enrolled at the Hebrew University of Jerusalem at age 20 where he studied English and Yiddish literature, a language he learned from his grandfather. He continued in the world of academia, teaching as a professor at Ben-Gurion University of the Negev from 1979 until his retirement at 68 years old. For the remainder of his life, Appelfeld, who was the recipient of numerous literary awards, lived in Jerusalem with his wife, Yehudit. In addition to winning the prestigious Israel Prize for literature in 1983, Appelfeld was the laureate of an assortment of other honors and awards that officially secured his place as a venerated novelist. In addition to twice being awarded the Anne Frank prize, he also received the Prime Minister’s prize, along with the Brenner Prize for literature in 1975, and the Bialik Prize for literature in 1979.

(Photo: David Rubinger)
His literary feats were also recognized worldwide when he was conferred international awards for his seminal works that were translated into 35 languages.

Appelfeld's "Blooms of Darkness", the tale of an 11-year-old boy hidden from the Nazis by a prostitute, won the Independent Foreign Fiction Prize in London in 2012.

In 2013, he was among a list of authors to receive the prestigious Man Booker International Prize. Awards of reverence continued fall to be presented to Appelfeld until his final years and in 2016, he was also presented with a citation French Legion of Honor. Moreover, he received an honorary degree from a myriad of universities, including his Alma mater in Jerusalem, Bar-Ilan University, the Jewish Theological Seminary of America and the Hebrew Union College—Jewish Institute of Religion.

(Photo: Ohad Zwigenberg)
Speaking in an interview with Ynet in 2013, Appelfeld recalled his experiences in the wilderness in World War II when his life’s mission was dedicated to fleeing the grasp of the Nazis. “In the forest I learned how to milk a cow and I learned to survive,” he said. “I would play games with myself. If today I see a white horse, it is a sign that my mother is coming to take me. I knew that my mother was killed and my father was in some camp, but it helped me go on,” he recalled.

After learning of Appelfeld’s passing, President Reuven Rivlin wrote a brief eulogy on his Twitter account. “Nechama (his wife) and I are extremely saddened by departure of our cherished author Aharon Appelfeld. May his memory and works be blessed forever,” he wrote.

Amos Oz, one of Israel's most prominent novelists, said on Army Radio that Appelfed shied away from graphic depictions of the Holocaust, choosing instead to describe its effect on the lives of his characters.

"He didn't want, or he was unable, to write depictions of the horrors - he said that too. They are beyond the ability of human language to express them. You have to approach them indirectly, tiptoeing from afar," said Oz, once Appelfeld's student in a kibbutz.