One of the apps developed by Unit 3060
Photo: IDF Spokesperson's Unit 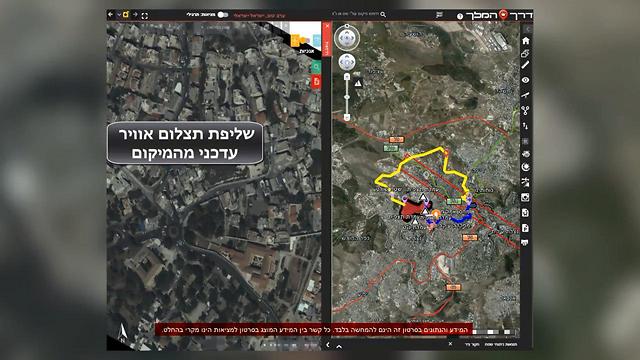 With a 'civilian startup's culture,' the IDF Military Intelligence Directorate's Unit 3060 develops apps to make the most classifieds items of intelligence accessible to commanders on the ground in real-time; some of the unit's developments include an app allowing commander to select the safest route of advancement and a system producing video clips from drone. 'They identify problems before the field does,' says officer.

An application that recommends to a company commander the safest route to a Hamas target and software that displays for a battalion commander bird's-eye satellite footage of the village he is preparing to enter in southern Lebanon. These are just some of the technological advances that are being developed by the IDF's new Unit 3060—a development unit attached to the Military Intelligence Directorate that was unveiled for the first time Wednesday.

Around 400 soldiers serve in the new secret unit—covertly formed in 2014—most of whom are programmers, software testers and graduates of Electrical Engineering and Computer Sciences degrees.

The "products" produced by the unit constitute a significant leap in making real-time intelligence easily accessible to military commanders, in bolstering security on the borders and in facilitating more efficient ground maneuvers based on the fusion of information, image processing, the use of artificial intelligence, swiftly displaying information using combined intelligence sources including drones and satellites, human espionage, recording, listening or tracking devices planted on enemy units and openly available intel taken from social media or newspaper outlets.

Take, for example, the unit's "Broadcast Researcher" system that enables a commander who needs to operate in a specific neighborhood in Gaza, south Lebanon or Syria to tap an aerial picture of the field he is preparing to enter and view a specific street or building, as well as receive an instant video stream of the site.

Another system that was unveiled by officers of the unit Wednesday is an application dubbed "The King's Way”, capable of calculating the quickest routes during a ground maneuver into enemy territory.

The program calculates distances of different available routes, estimated times of arrival, vehicle journey times for armored vehicles, and displays slopes en route that are hazardous for Armored Personnel Carriers, while considering weather conditions and their effect on the ground, as well as providing analysis and detection of areas in which the force may be exposed to the enemy's observation or weapon fire located at nearby potential control points.

Furthermore, the software is updated in real time and even considers changes to the topography that occurred as recent as hours or even minutes prior, such as an aerial bombardment that changed the area's terrain.

A previous and less advanced incarnation of this program has already proved itself in Operation Protective Edge when—during a maneuver of the Nahal Brigade and the 401 Armored Brigade in the northern Gaza Strip Al-Atatra neighborhood—the forces chose a path of progress that prevented them from walking into an ambush and even aided them with clearing buildings booby-trapped by Hamas forces.

The software and applications developed by the unit are more suited to the rank of brigade commander and division commander, while the intelligence officer of these units could analyze the data from the systems for the commander, acting as a sort of mediator.

In contrast to similar applications already available for ground forces, products being developed by this new unit include nearly limitless intelligence depth of the highest classification levels, as well as smart algorithmics enabling to construct a plan of attack in real-time or understanding the enemy's movements in a better and faster fashion.

Similarly to civilian apps, the unit's programs will also receive regular updates, sometimes during actual operational activity, with the persons providing support and maintenance on the apps for the commanders in the field being the heads of the teams that developed them.

"During the large drill in the north held earlier this year, one of the division heads entered my office and said the operational end-user for one of the apps will call in to report a malfunction in two hours' time, because he was capable of monitoring, identifying and fixing such problems before they are felt in the field," a senior officer at Unit 3060 said Wednesday.

"We're working based on products rather than projects, three months at a time, with a civilian startup's culture," the officer revealed.

Ten high-functioning autistic soldiers currently serve in the unit, as part of an IDF project to promote such populations in its technological units. One niche of note that has inserted itself into the unit's operation has to do with the efficient use of intelligence through cyber, from collecting all relevant data items to the ability to predict events that have yet to happen and consequently recommend a way of countering them.

"The systems being developed in the unit are our ammunition, but they won't be replacing intelligence officers," said one such officer from Northern Command at a Wednesday press briefing. "They are products allowing us to increase the number of targets to attack and reduce mistakes, for instance by outlining sensitive elements such as mosques and schools."

"During routine security operations, meanwhile, the systems will be used to analyze the lay of the land, so that if an object approaches a certain hill in the Syrian Golan Heights, for instance, the system will recommend pointing a camera at that hill using information previously collected on the terrain," he concluded.