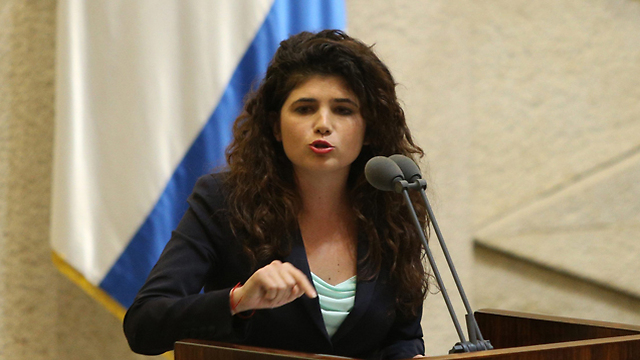 MK Amsalem petitions Likud's internal court to revoke MK Sharren Haskel's membership; 'Her not voting could hurt the stability of the coalition and endanger the government's continued existence,' Amsalem argues; 'Amsalem crossed a red line with his bullying,' Haskel accuses.

Coalition chairman MK David Amsalem petitioned the Likud Party's internal court on Sunday to revoke MK Sharren Haskel's membership, after she announced she does not intend to vote with her party in favor of the supermarkets bill. While the Likud internal court is likely to reject Amsalem's petition, it is seemingly an attempt to pressure Haskel to vote in favor of the controversial legislation, which seeks to give the interior minister the authority to strike down municipal bylaws, including ones permitting some businesses to work on Shabbat.

Even if accepted, the petition will not lead to Haskel's ouster from the Knesset, but it would hurt her ability to run in the next elections as part of the Likud Party.

MK Sharren Haskel (Photo: Amit Shabi)
According to Amsalem's petition, Haskel's declaration that she will not vote with the Likud Party in favor of the supermarkets bill constitutes assistance to rival parties and violates the Likud Party's decisions in the Knesset. "These circumstances constitute due cause to terminate the respondent's membership in the movement, in line with articles 21a(6) and 4 of the Likud Party constitution," according to the petition.

Amsalem said the Likud Party's legal advisor, Avi Halevy, warned Haskel about a week ago of the ramifications her actions could have.

Halevy also asked the Likud's internal court to summon Haskel for a hearing and revoke her membership even before the supermarkets bill goes up to a vote in the Knesset in second and third readings later this week.

"Her not voting (in favor of the bill) could hurt the stability of the coalition and endanger the government's continued existence," Amsalem contended.

"Haskel was not voted to the Knesset in direct elections, but in relative elections—meaning the citizens voted for 'Likud headed by Benjamin Netanyahu' and not for 'Sharren Haskel.' She is therefore bound by loyalty to the Likud, on whose behalf she serves in the Knesset," Amsalem explained.

"I expect her to adhere to the basic condition—honor the party's decision and vote in favor of the bill proposal," he concluded.

Haskel slammed Amsalem's move, accusing him of "crossing a red line with his bullying, which does not befit the spirit of the Likud Party. Jabotinsky and Begin's values are the ones I swore to protect, not the whims of one minister or another—which create division among the people. I will not allow this to happen. The supermarkets bill belongs to a party (Shas) that barely passes the threshold, it forces a lifestyle on an entire public, discriminates between cities, and further deepens the secular-Haredi rift."