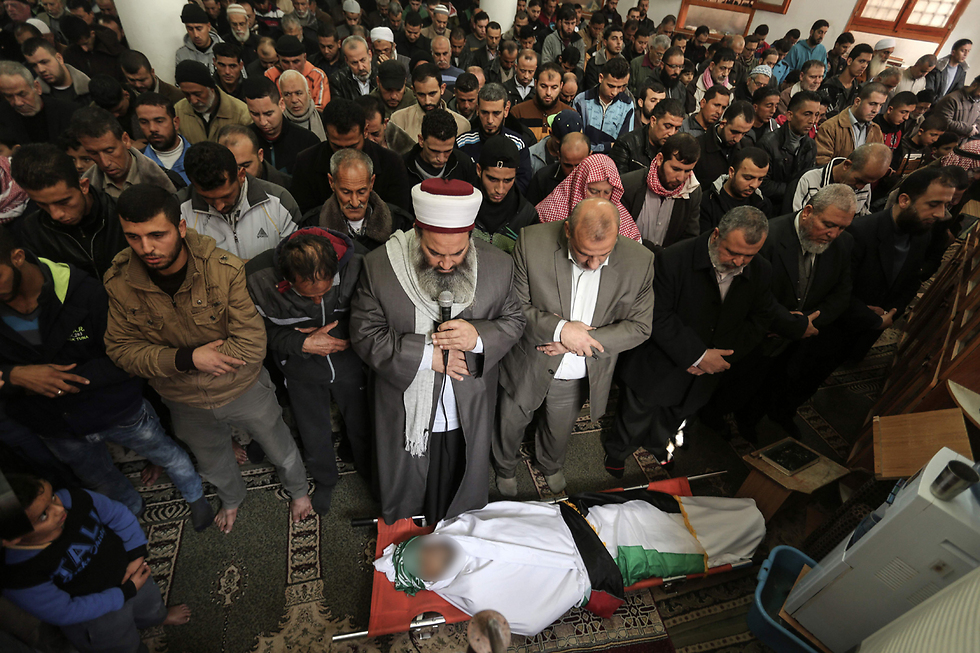 Gaza's Interior Ministry calls on Cairo to investigate the incident, in which 33-year-old Abdullah Zeidan from the Shati refugee camp was shot in the chest by Egyptian forces; Palestinians claim he did not cross naval border.

A fisherman from the Gaza Strip was shot dead by the Egyptian army overnight for unclear reasons, Palestinian officials said Saturday, calling for an immediate investigation into the incident.

Medical sources in Gaza said that Abdullah Zeidan, 33, from the Shati refugee camp, was shot in the chest by Egyptian forces near the naval border with Egypt in the south of the coastal enclave.

He was taken to hospital but died early Saturday morning.

Zeidan's funeral (Photo: AFP)
Gaza's interior ministry said an initial investigation indicated "the Palestinian fishing boat did not cross the Egyptian (maritime) border" and remained in the Palestinian waters of the town of Rafah.

"We call on the Egyptian authorities to open an urgent investigation into this incident," spokesman Iyad al-Bozum said in a statement.

Egyptian officials did not immediately comment. The head of the fishing union in Gaza announced a halt in fishing until Sunday evening in protest at the killing.

Fishermen from Gaza have often brought in catch from Egyptian territory to sidestep restrictions imposed by Israel's naval blockade of the enclave.

Gaza fishermen say that the limited fishing zone imposed by Israel is not big enough to meet demand of the coastal strip's 2 million people.

Egyptian forces, meanwhile, have in the past opened fire at Palestinians trying to smuggle weapons and other items from the Sinai Peninsula into the strip.

The Associated Press, Reuters and Elior Levy contributed to this report.