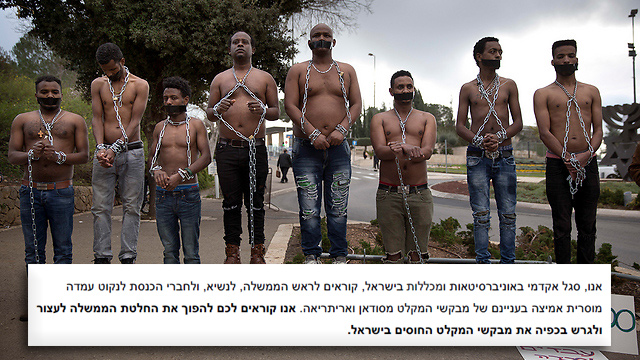 Academics call on government to 'do the right thing, stop expulsion'

Hundreds of academics from institutions across Israel sign petition asking government not to expel African asylum seekers; 'We too were once persecuted, victimized. We should happily embrace refugees.'

Hundreds of academics from universities and colleges put their names to an open letter addressed to Prime Minister Benjamin Netanyahu, President Reuven Rivlin and members of the Knesset calling on them not to expel the asylum seekers from Sudan and Eritrea.

"Do what the world should have done for us," pleaded the signatories. "We are calling on you to overturn the government decision, to halt the forced expulsion of asylum seekers in Israel.

Anti expulsion protest (Photo: AP)
"We must remember that we too were once persecuted and victimized. We too were once aliens and we should happily embrace refugees who have fled their homeland in order to save their, and their families, lives."
Protest against expelling asylum seekers
X

Over 470 academics have signed the letter, an initiative of Professor Amit Bernstein of Haifa University's psychology department, and marked only one in a series of protest measures planned by Israeli educators and students.

"The history of our people demands of the State of Israel to serve as an example in treating children and adults seeking shelter from ethnic cleansing, persecution,, political violence, human trafficking, rape and torture," they wrote. "The State of Israel is sufficiently big and strong in order to offer temporary shelter to tens of thousands of asylum seekers from east Africa, until such time that they can return home in safety and security." In the letter, the signatories also demanded that, "We must cease calling the refugees 'infiltrators.' Asylum seekers are people who were forcefully torn from their homes under tragic circumstances."

The petition goes on to say, "What will we tell our children and grandchildren when they ask us, 'What did you do for the Sudanese and Eritrean asylum seekers? How did you protect them? Did you do the right thing? What was their fate?'"

The letter concludes with a plea: "Do the right thing!"

At the Kibbutzim College of Education, 50 lecturers and students organized a series of public relations and protest measures against the planned expulsion, with the support of the college administration and in the hope that others will join them. "We are planning a demonstration next week, in front of the college on Namir Road, as well as a joint campaign involving lecturers and students including setting up kiosks that will provide information during breaks," Nimrod Aloni, head of the Institute for Advanced Education at the college and one of the organizers, told Ynet.

Asylum seekers in the Holot dentition facility (Photo: Motti Kimchi)
"They are being portrayed as a cancer, a health hazard and spreaders of disease—as if they are a dangerous enemy," said the leaflets handed out to students. "They are tuning into the racist aspects of Judaism in order to maintain racial purity. They repress the memory of the recent Jewish experience of (being subject to) persecution and being survivors. They are imprisoned without trial in mass camps as if they are not human. And now they are being sent (via manipulative measures) to a terrible fate, to being robbed in Africa or drowning in the Mediterranean Sea. "As citizens of Israel from across the political spectrum, we call on you to stand against this evil, to stop the expulsion of refugees, to maintain our common humanity, and to refuse cooperation with the moral crime inherent in expulsion," continued the letter. The college administration wrote that it is "lending its support to the joint initiative by students and faculty to prevent the expulsion of asylum seekers. As an educational institute that sees as its mission to produce humanist educators who have social and environmental responsibility and who are committed to the sanctity of human life, human dignity and equality, the college administration commends any initiative and action aimed at promoting these basic values. "

Other petitions targeting academics were circulated on social networks in the last few days. "We are deeply opposed to the expulsion, which we find especially appalling because a state established as a result of genocide, to be a refuge to survivors, should not behave thusly," said one such petition written by Dr. Ilan Saban, Dr. Yuval Ilon and Dr. Tali Kritzman-Amir.

Israel recently notified thousands of Africans who entered the country illegally that they have three months to leave or face incarceration.

The Population and Immigration Authority called on migrants from Sudan and Eritrea to leave "to their country of origin or to a third country," meaning Rwanda or Uganda. Those who leave by the end of March will be given $3,500, along with airfare and other incentives.

Israel and Rwanda recently signed an agreement whereby asylum seekers can be sent there even without their consent. Asylum seekers have been sent to Rwanda for the past three years as part of a plan encouraging voluntary immigration. Those who do not leave willingly will be detained at the Saharonim prison. Beginning March, the incentivizing sum given to those who leave willingly will be decreased. Employers of those who do not leave will also face prosecution. According to Interior Ministry data, 4,012 illegal immigrants willingly left Israel during 2017, among them 3,332 from countries other than Sudan and Eritrea. Humanitarian and immigrant advocacy groups have condemned the government's decision saying expulsions "put refugees' lives in danger."