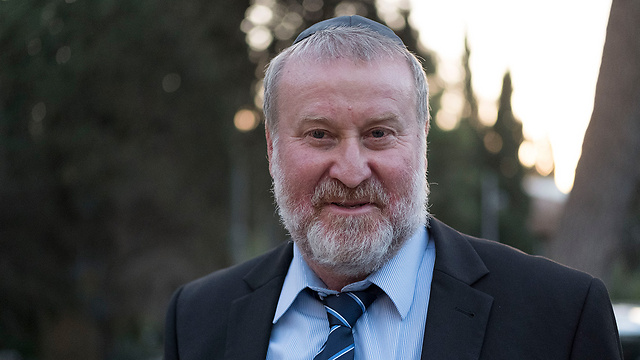 Group of protesters corner AG Mandelblit outside synagogue near his Petah Tikva home where he was reciting Kaddish for his deceased mother; security guard nearby extracts him to safety; Justice Ministry spokesman: 'Red lines have been crossed'; Justice Minister Shaked: 'Violent thuggery'; 700 protest government corruption in Tel Aviv.

A group of protesters cornered Attorney General Avichai Mandelblit outside a synagogue near his Petah Tikva home Saturday—which he attended to pray for his recently departed mother's soul—and pelted him with invective. A Justice Ministry security guard who happened nearby extracted Mandelblit to safety.

The incident took place at the Nigunei Haim Synagogue. While some worshipers left the synagogue to recite Kiddush Levanah—a series of prayers blessing the new moon—Mandelblit stepped outside to recite the Kaddish prayer for his deceased mother.

When protesters spotted him, they called out, "You ruined this country." A verbal altercation then broke out between the protesters and one of the worshipers, who denounced the demonstration being held before Shabbat ended. Protesters, meanwhile, vowed to return to the weekly protests in the future.

AG Mandelblit was accosted outside his local synagogue by protesters (Photo: Yoav Dudkevitch)
Justice Minister Spokesman Moshe Cohen commented on the irregular incident, saying, "The provocation in the synagogue where the attorney general prays in Petah Tikva—which desecrated Shabbat and disturbed worshipers—is deplorable. It's an utter disgrace. These are extremists who disseminate incitement and lies, and they hold nothing back. Red lines have been crossed here."

Justice Minister Ayelet Shaked added, "The lines of legitimate protest have been crossed recently. Harassment during Shabbat—and at the attorney general's synagogue, no less—is violent thuggery and denigrating behavior."

The altercation outside the synagogue (Photo: Ariel Schnabel, Makor Rishon)

Yaniv also stressed that the people involved were not part of his anti-corruption protests.

Police received word of the incident and arrived on the scene, but by the time they had the crowd had already dispersed. It was Mandelblit's wife who took him home after Shabbat ended.

Opposition Head MK Yitzhak Herzog said, "I'm appalled by the insensitive protesters' inflexibility in disturbing the attorney general as he came to pray and recite Kaddish over his late mother. It's an inhumane act. Even the freedom to protest, sanctified in Israeli democracy as it is, has lines that must not be crossed." Knesset Speaker Yuli Edelstein also voiced his displeasure. "Hounding Attorney General Mandelblit while he's reciting Kaddish over his late mother crosses all boundaries. This barbarous, thuggish act is completely out of bounds. I call on protesters to put an end to sights like these by reining themselves in and exhibiting judgment and sensitivity."

The weekly Tel Aviv anti-corruption protest (Photo: Shaul Golan)
Meanwhile, some 700 people participated in the weekly protest against governmental corruption, held for the 61st week in a row, this week once again emanating from HaBima Square, where speeches were held and a march then began towards Rothschild Street, where businessman Kobi Maimon resides.

Business mogul Maimon owns parts of Israel's natural gas drilling operations, and his son was covertly recorded in a 2015 conversation with Prime Minister Benjamin Netanyahu's son Yair, in which they denigrated women and discussed the passage of the gas drilling rights agreement.

Signs were spotted in the rally saying, "Both on the left and the right, the people are the sovereign", "Corrupt, go home" and "Brothers to the war on corruption."

Hundreds of protesters chanted, "Bibi, resign, we don't believe you anymore" and "Corrupt to jail."

Meni Naftali, former caretaker at the Prime Minister's Residence and the protests' other chief organizers, said during the rally, "Lift those signs high and cry out, 'Bibi, go home.' We started demonstrating at Mandelblit's and we should ask him: why is the prime minister always under watch?

"Because there was and there will be recommendations in a month, tops. This protest isn't about right, left or center. It's yours. As soon as we get a million people out there, and we will… We're here every week. Netanyahu is scared of the protests," Naftali added.

The former caretaker then concluded by saying, "Tell Mandelblit and Netanyahu: 'Let my people go!'"