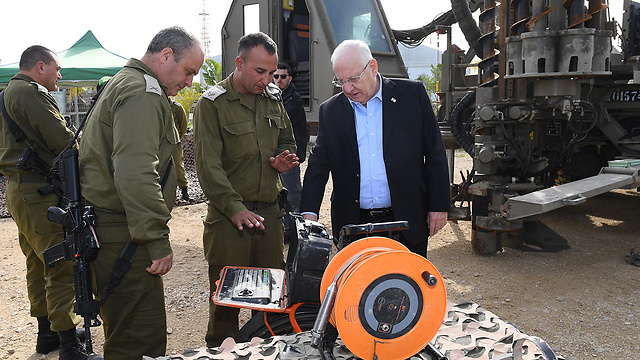 Speaking during visit to Gaza border where he received a briefing on IDF measures against Hamas attack tunnels, addressed students and toured a new neighborhood, president urges world to pressure terror group 'to accept responsibility for their actions and the lives of their people.'

President Reuven Rivlin warned Sunday of an impending deterioration in the humanitarian crisis in the Gaza Strip, attributing the prevention of an improvement in the coastal enclave to the ruling Hamas terror group.

“The time is coming near, when the infrastructure in Gaza will collapse, leaving many civilians in distress, with no sanitary conditions, exposed to pollution, impure water, and epidemics,” Rivlin warned during a visit to the Gaza border area.

“The entire world must know and understand that the ones who are preventing rehabilitation are the Hamas.”

President Reuven Rivlin during briefing near Gaza (Photo: Mark Nayman/GPO)
Israel is the only one in the region, Rivlin continued, that continues to transfer basic humanitarian essentials to the residents of Gaza regardless of the situation “so that they can sustain the body and mind.”

Israel would not, he said, “tolerate accusations of blame” and called on the international community “to pressure those ruling Gaza, to pressure Hamas, to accept responsibility for their actions and the lives of their people.”

Receiving a review of the challenges currently facing southern Israel from Deputy Chief of the General Staff, Gen. Aviv Kochavi, Southern Command chief Maj. Gen. Eyal Zamir, Head of the IDF Gaza Division Col. Yehuda Fuchs, Rivlin also toured the new neighborhood in Kibbutz Nirim, and met with around 250 students and residents from the area at the Nofei HaBasor School.

After being briefed on current developments in the IDF’s countermeasures against the Gaza-dug attack tunnels, Rivlin asserted that Israel remained determined to bring about stability to its southern border.

Rivlin also praised Israel’s feats in constructing its a subterranean barrier to fend off Hamas attack tunnels into Israel.

“We will not rest until there is quiet, until we have built a barrier of iron, a wall of iron, which together with Iron Dome will defend the residents from those who wish them ill,” he said in reference to the “Iron Wall doctrine” expounded by one of Israel’s leading Zionists, Ze’ev Jabotinsky.

“I have come to you now from meetings with the security forces and having received an operational update,” began the president in his address to the students. Speaking about Operation Protective Edge, he went on to say that “In that operation, we fought for our home, for our kindergartens, for our schools, for our paths and fields. That was a war for our existence and for our daily lives.”

He also told the students that while the ground offensive concluded after 50 days, the war was not over.

“The State of Israel’s mission is not completed. We will fight the terrorist organization— an extremist, cruel, and murderous terrorist organization. A terror organization which does not spare a single thought for the future and welfare of the residents of Gaza, and for which a ‘reconciliation’ of one kind or another is only a step towards the advancement of war,” he scathed against Hamas.

But he also warned that while Israel was not complacent, “the next operation, if it will be forced upon us, will be different and harder than those before.”

“But we are determined to arrive at it ready, trained, with the element of surprise and not surprised, and to strike the enemy harshly and firmly. Even in days of calm, our forces stand constantly in the face of the danger. They are operating in highly complex conditions, against forces looking to undermine them very literally from above and below."