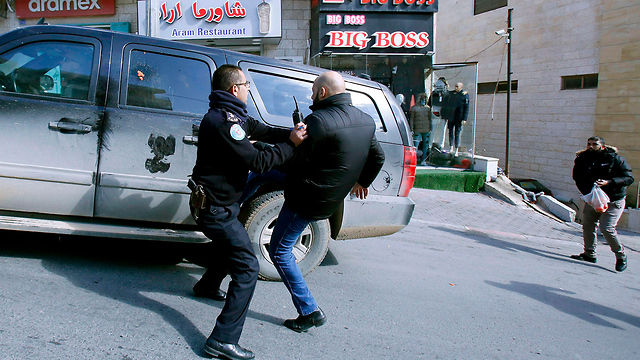 Five demonstrators disrupt marketing workshop in the West Bank, vandalizing and throwing tomatoes at an American diplomatic vehicle; on Saturday, some 30 protesters hanged and burned effigies of Trump and Pence.

BETHLEHEM - Palestinians protesting against US President Donald Trump's policy on Jerusalem halted a US-coordinated Palestinian marketing workshop in the West Bank on Tuesday, damaging an American diplomatic vehicle as it sped away.


Footage from the protests staged against the Trump administration    (צילום: רויטרס)
X

Footage from the protests staged against the Trump administration

Protesters threw tomatoes at the sports utility vehicle, which had US consular licence plates, kicked one of its doors and ripped the plastic casing off a side mirror as it drove off under Palestinian police escort from the Bethlehem Chamber of Commerce.

Samir Hazboun, the chamber's director, told Reuters that a digital marketing workshop was under way when about five protesters barged in.

Protester trying to forcefully enter US diplomatic vehicle (Photo: AFP)
"We hosted an American expert on this issue. Some people who have been trying to express their point of view and protest (against) the American decision regarding Jerusalem and the political situation ... interrupted the workshop and we stopped the workshop," Hazboun said.

Protesters disrupting seminar in Bethlehem (Photo: AFP)
Commenting on the incident, a State Department spokesperson said: "The United States opposes the use of violence and intimidation to express political views. This non-political program was one part of long-term US engagement to create economic opportunities for Palestinians."

The US-based lecturer was not a consular staff member. He was accompanied by consular security personnel and some of its Palestinian employees, organizers said.

On a visit to Israel last week, US Vice President Mike Pence said that Trump's promised relocation of the US Embassy from Tel Aviv to Jerusalem would take place by the end of 2019. Palestinians boycotted Pence's visit.

Hanging effigies of Trump and Pence in Aida (Photo: AFP)

Israel's government regards Jerusalem as the eternal and indivisible capital of the country, although that is not recognized internationally. Palestinians say east Jerusalem, captured by Israel in the 1967 Six-Day War, must be the capital of a state they seek in the West Bank and Gaza Strip.