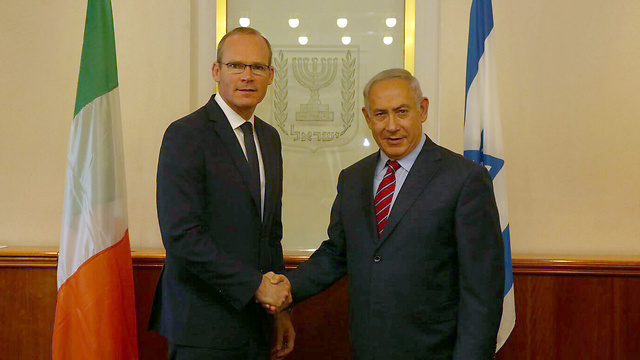 Netanyahu slams bill that 'gives backing to those who seek to boycott Israel' and would make Ireland the first European country to ban products produced in Israeli settlements; bill receives extensive backing from prominent left-wing Israelis.

Israel is condemning an Irish bill that would outlaw the import of goods from West Bank settlements and plans to summon the Irish ambassador over the legislation. If passed, Ireland would become the first European country to ban settlement products, though several countries already label them.

In addition to calls for boycotts against imports from and exports to Israeli communities over the Green Line, the bill also comprises stipulations that include hefty punishments for those in violation of the prospective law, including up to five years in prison and a financial penalty of up to 250,000 euros.

If the new bill is ratified, punishment would be meted out to Irish tourists visiting beyond the Green Line who purchase services or goods produced by Israelis.

During discussions Tuesday in the Irish Parliament which concluded without a vote, Foreign Minister Simon Coveney expressed categorical opposition to the bill. The vote will be postponed until July.

A litany of prominent left-wing Israelis backed the bill to ostracize Israeli settlements, a point that was hammered home in the Irish Times newspaper, in which calls by a string of Israelis were published imploring the Irish parliamentarians to throw their weight behind the bill.

Among the list of prominent Israelis pushing for the bill was the known ultra-left former Knesset speaker, Avraham Berg, and former ambassadors Alon Liel and Ilan Baruch.

Civil Service Commissioner Itzhak Galnoor also featured on the list of Israelis itching for the imposition of boycotts on the country. Other prominent former legal officials such as Michael Ben-Yair, who served as Israel’s attorney general from 1993-1996, also made public their support for the bill, as did the Israeli journalist Uri Avnery.

“We, concerned citizens of Israel, implore Ireland to support legislation that will help to draw the distinction between Israel itself and the settlements in the occupied territories in the West Bank and East Jerusalem,” the signatories wrote in the published joint letter.

“The Israeli occupation of the territories beyond the 1967 lines has continued for more than 50 years without any end in sight and not only does it lack justice, it also violates numerous UN resolutions,” it continued.

“We are convinced that the continued occupation is impossible from a moral and strategic point of view, damages peace and constitutes a threat to the security of Israel. As people who care deeply for the future of Israel and as people who long for peace with our neighbors, we urge you to support the bill,” the letter concluded.

Irish President Michael D. Higgins meets with BDS Founder and Director Omar Barghouti (Photo: BDS)
The European Union in 2015 approved guidelines to label settlement products. It said the move was meant to differentiate between Israel, a close trade partner, and the settlements, which it considers illegal. Although the Irish bill makes a similar distinction, Israeli Prime Minister Benjamin Netanyahu said it aims to harm his country and would bolster an international movement advocating boycotts against Israel. The bill, debated in Ireland's senate Tuesday, must pass several hurdles to become law.

The Prime Minister's Office released a scathing statement on the matter.

"The initiative gives backing to those who seek to boycott Israel and completely contravenes the guiding principles of free trade and justice," the statement read.

"Prime Minister Netanyahu instructed that the Irish Ambassador to Israel be summoned to the Foreign Ministry on this matter."