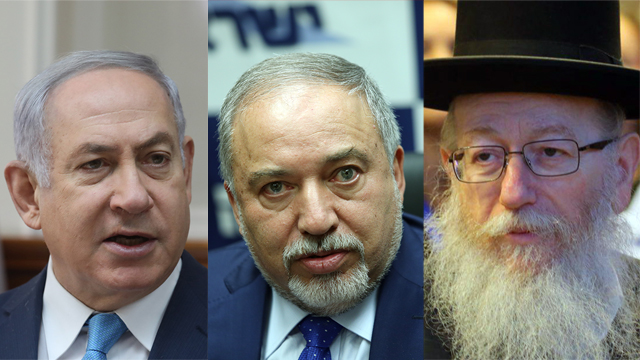 As Prime Minister Benjamin Netanyahu prepares to meet with Haredi representatives in an effort to solve the IDF recruitment crisis which is endangering the stability of his coalition, Yisrael Beytenu Chairman and Defense Minister Avigdor Lieberman tweeted Saturday evening, “In life, there are moments in which you have to go with what you believe and not with what pays off. Now is that time.”

Lieberman toughened his stance over the last few days and made clear that he does not intend to back down from his demand that any new IDF recruitment bill be drawn up together with the Defense Ministry and the IDF.

The prime minister met with members of the Likud and Haredi parties Saturday, including Yaakov Litzman, Moshe Gafni and Aryeh Deri, to try to solve the impasse. Ministers Yariv Levin and Ze’ev Elkin will be in attendance as well.

Friday, Lieberman attacked the Haredi parties over the crisis. “The bill currently being drafted is not a compromise, but rather a surrender to extortion. Anyone who wants to get into extortion should surrender,” Lieberman wrote.

“The ultimatum, or the draft-or-budget law, was put forward by the ultra-Orthodox parties, and the ultimatum to 'draft a recruitment bill and have it pass a second and third reading by May or else the dissolution of the government’ the Haredim chose.” Lieberman pledged that, "Yisrael Beytenu will support only a bill drafted by the defense establishment and the IDF. There is no compromise on security."

Sources close to Defense Minister Lieberman also denied reports Saturday of a deal between the Yisrael Beytenu chief and Prime Minister Netanyahu to run together in the next elections as part of a single Knesset list.

Yisrael Beytenu added the party will run independently and that no other option was entertained.

On the matter of the draft crisis, sources closed to the defense minister said, "People sticking to their chairs are busy arm wrestling and floating ultimatums. We're not party to that. Just like Haredim are not expected to support public transportation on Shabbat, we should not be expected to (support draft exemptions)."

On Thursday, Lieberman attacked Deputy Minister Litzman without naming him, saying that, "In recent days Israel has been taken prisoner by a group of extremist elements, they are threatening to drag us all to unnecessary elections in a (time of a) difficult security situation and demanding that we surrender to their blackmail, otherwise they will dismantle the right-wing government. We must not allow this to happen.”

MKs Moshe Gafni, Uri Maklev and Yaakov Asher of the Lithuanian faction of the United Torah Judaism (UTJ) party met with their rabbinic leadership Saturday night, ahead of their meeting with the prime minister.

The three Knesset members met with Rabbi Chaim Kanievsky and Rabbi Gershon Adelstein, the main decision-makers of the party since the passing of Rabbi Aharon Leib Shteinman. Gafni presented them with a watered-down version of the draft bill they are seeking and asked the rabbis for guidance.

Gafni himself advised that they should concur to having only a preliminary reading of the bill this week along with a commitment by the coalition to complete the legislative process in the summer session, and the rabbis consented.

UTJ's Hasidic faction, however, led by Deputy Minister Yaakov Litzman opposes the compromise and insists on the bill receiving full approval by the Knesset before its Passover recess. Litzman’s faction will meet Sunday to discuss their next move.

Litzman's faction was said to be awaiting a decision by the leader of the faction, the Rebbe of Gur, who was the one who insisted on the immediate full passing of the bill as a condition for supporting the state budget. It was not initially clear whether he will withdraw his demand.

The compromised version of the bill does not include a clause that would make the study of Torah a Basic Law, which most coalition members opposed doing. The matter of sanctions if quotas are not met was also softened, a problematic matter for the rabbinical leadership.

If the rabbis insist on a full immediate triple reading of the bill and reject the compromise, then early elections are likely.

Netanyahu: No more controversy until November, 2019

Prime Minister Netanyahu told the Haredim on Friday that if the current crisis is resolved, he will demand they refrain from bringing up any more controversial matters relating to religion and state until the next elections, slated to take place November, 2019.

Senior coalition members declared Saturday that they will not agree to elections in June but rather only at the end of the year. They are essentially signaling to the prime minister that they wish to be partners in choosing the date for elections.

Shas Chairman Aryeh Deri consulted with the rabbinic leader of Shas, Rabbi Shalom Cohen, who is currently in Mexico, and received instruction on how to proceed when meeting the prime minister. He also instructed MK Yoav Ben Tzur to consult with other members of the rabbinic council.

The apparent compromise in the draft exemptions bill included amendments to the bill currently on the docket of the Ministerial Committee for Legislation, and was formulated by Ariel Atias, former Shas housing minister and currently legal adviser to United Torah Judaism, together with Justice Minister Ayelet Shaked and Attorney General Avichai Mandelblit. The move, it should be noted, was carried out without all of the coalition's members reaching a compromise on the issue.

The plan refers to recruitment targets—initially about 3,800 ultra-Orthodox recruits in every recruitment cycle (both for the IDF and for civilian service)—with the number intended to rise gradually.

If the goals are not met, sanctions will be imposed on yeshivas. In addition, if the failure to meet the targets continues for a period of five years, the lenient law will expire.