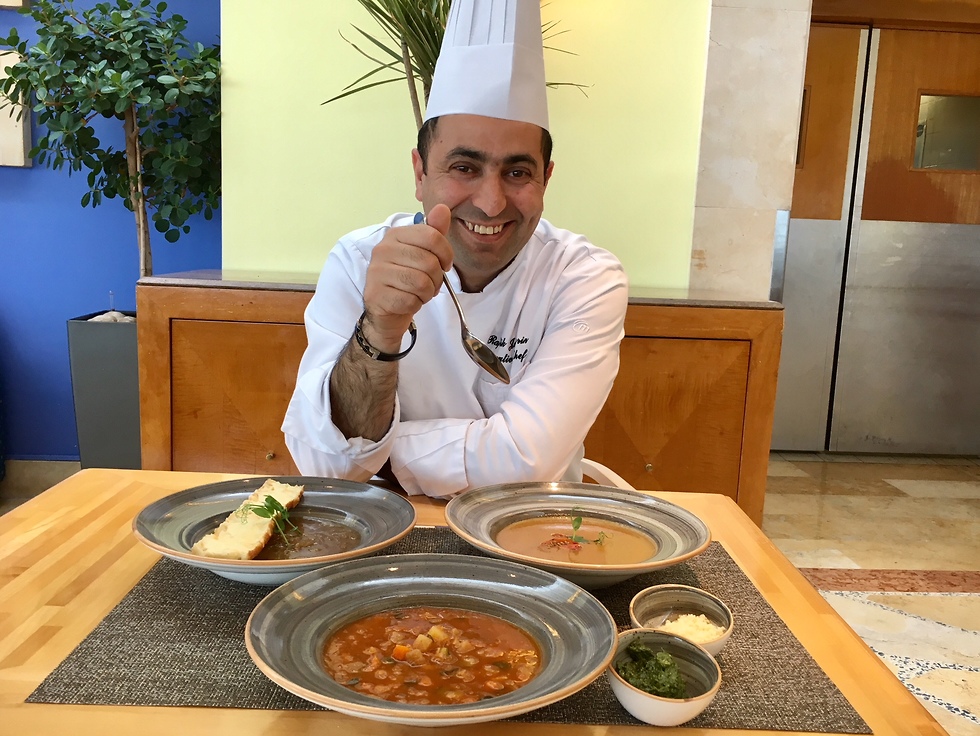 Review: We could not say goodbye to winter without recalling the best soups and dishes that helped keep us warm; there is still time to visit these popular places and enjoy their hearty fare. The restaurants are listed alphabetically and have English menus; two are kosher (one with certification).

The newly refurbished Lobby Restaurant and Bar in the Tel Aviv Hilton serves an annual Warm Up Your Winter menu, featuring a whole array of international soups created by the hotel’s executive chef, Rafik Jabarin.

(Photo: Motti Verses)
Also recommended are some warming main courses, such as polenta Parmesan with shimeji mushrooms, sea bass siniye, and a variety of pasta dishes.

It is worth saving room for one of the artistically crafted desserts at the Hilton, which are especially hard to resist after viewing the pastry chef’s creations in the refrigerated display case.

Finally, the hotel boasts a larger than usual selection of fine wines by the glass, in addition to a full bar and imported and domestic beers on tap and in bottles.

The Warm Up Your Winter menu is served weekdays between 12pm-9pm, and will end before Passover. After the holiday, the entire menu of the Lobby Restaurant and Bar will be undergoing revision.

The small storefront on Tel Aviv’s busy Dizengoff Street is the epitome of what can be called a “hole in the wall” eatery. Its diminutive size, however, certainly does not deter the crowds who line up to be served the soups, stews and salads that patrons carry to the handful of tables inside or on the sidewalk. The sign on the door announces “Market, Seasonal Kitchen, 100% Vegan,” while the restaurant’s motto is “Because fresh, tasty, healthy foods should be affordable”—a slogan reinforced by the very reasonable prices.

(Photo: PR)
There are comprehensive menus in Hebrew and English, with indications as to which dishes are spicy or contain gluten. But the best source of the day’s offerings is the large blackboard, whose listings are only in Hebrew. The menu references no fewer than 19 soups, although only two or three are available on any given day. The good news is that you can request tastes of anything simmering in the pots on view. Two recommended soups are the Thai pumpkin, a coconut milk-based orange broth seasoned with lemongrass and a hint of chili, and harira, a thick and hearty Moroccan combination of lentils and root vegetables. The equally satisfying tavshilim also boast international pedigrees, reflecting such diverse cuisines as Indian and Persian and North African. They are served with choices of white or brown rice. Market TLV. Kosher (100% vegan, closed on Shabbat), Dizengoff St. 140, Tel Aviv. Tel. (03) 552-5808

This pan-Asian restaurant, situated in a modern, attractive setting in a suburban shopping center, boasts lots of free parking. There is both indoor and al fresco seating. Reflecting the full bar here are the restaurant’s unique winter cocktails, which are served hot. Especially recommended are the Tanya Snow—sahleb, rum and cinnamon, garnish with aniseed—and the Red Passion—red wine vanilla vodka, orange, honey, mint and cinnamon. There is also warm sangria and warm sake. The selection of imported and domestic beers includes Israeli craft beers.

The three soups at Taya are listed in the Noodles category, which tells you right away that they are large, hearty and full of filling noodles. The Coconut Dragon, which has a rich coconut milk base, contains ramen noodles, chicken and bamboo shoots, while the Ram Yam soup features udon noodles, mussels, shrimp, mushrooms, cabbage, chili and lemongrass. There is also one vegan broth option.

The electronic menu also has a page called Winter Specials. Although this entire category was still awaiting translation at the time of our visit. The intriguing sounding dishes here included Thai gyoza soup—chicken gyoza and vegetables in a slightly spicy red curry broth—plus two Japanese dishes and a corn soup.

(Photo: Buzzy Gordon)
Other warming dishes at Taya may be found in the Rice Plus category, especially the Curry Kobi. The only dish in this section to have the term curry in its name consists of chicken cooked in red curry with coconut milk, onions, peppers, sweet potato and rice. Taya’s menu includes a tempting page of decadent Western desserts, such as the Cookielida Sandwich, starring chocolate chip cookies and mascarpone cream coated in hot chocolate. Taya. Not kosher. Ha’ofeh St 1, Kadima. Tel. (09) 772-8878

Vong, a casual eatery with rudimentary furnishings, is arguably the best Vietnamese restaurant in the country. It also has a bar that has crafted a long list of inventive specialty cocktails.

The Soups section of the menu is not to be skipped, even on a warm day, since it includes the national dish of Vietnam—pho, the rice noodle dish that is practically a meal in a bowl. It can be ordered either for one person or a double portion for two people to share, and with a choice of strips of either steak or chicken.

(Photo: Buzzy Gordon)
The other permanent fixture in the soups section of the menu is the wonderfully aromatic and complex Viet Sea Soup, a coconut milk broth with fish, shrimp, scallops shimeji mushrooms and Asian herbs. This dish, which comes in one size that is large enough to share, is served with sticky rice balls flavored with just the barest hint of crab meat. Other good bets for warm winter fare can be found in the Comfort Curry Zone, whose five curries—four chicken and one shrimp—are more likely to be mildly spicy than fiery. Other sections of the extensive menu include noodle dishes, rice dishes, salads, rolls and buns. There is no dessert menu, but the waiter will recite some suggestions. Vong Vietnamese Kitchen. Not kosher. 15 Rothschild Blvd. 15, Tel Aviv. Tel. (03) 633-7171

This popular neighborhood eatery is a cozy place on a side street that shares a tiny square with Basel Street in north Tel Aviv. There can be a line even on a weeknight, so reservations are advised. The restaurant has a few interesting specialty cocktails, plus sake, wine, and imported and domestic beers.

The menu lists four soups, three of which are ramen: the Umi Ramen and Mendori Ramen are big bowls of consommé brimming with noodles, shiitake mushrooms, carrot, scallion, tofu and seaweed; the major protein in the former is seafood, while in the latter it is chicken.

(Photo: Buzzy Gordon)
Other warm dishes include a nice variety of dim sum—both steamed and seared dumplings. As the restaurant’s name implies, there is the usual complement of rolls, maki and nigiri; but there are also two worthwhile house specialities: Inari sushi—tofu pockets filled with sushi rice, red tuna and avocado—and Tamari sushi—sushi rice balls with salmon, red tuna and spicy mayonnaise on Japanese wasabi-infused tehina. There are four desserts, the most Japanese of which is the brulée with yuzu. Ze Sushi. Not kosher. Ashtori HaParhi St. 14, Tel Aviv. Tel. 1-700-70-89-89.