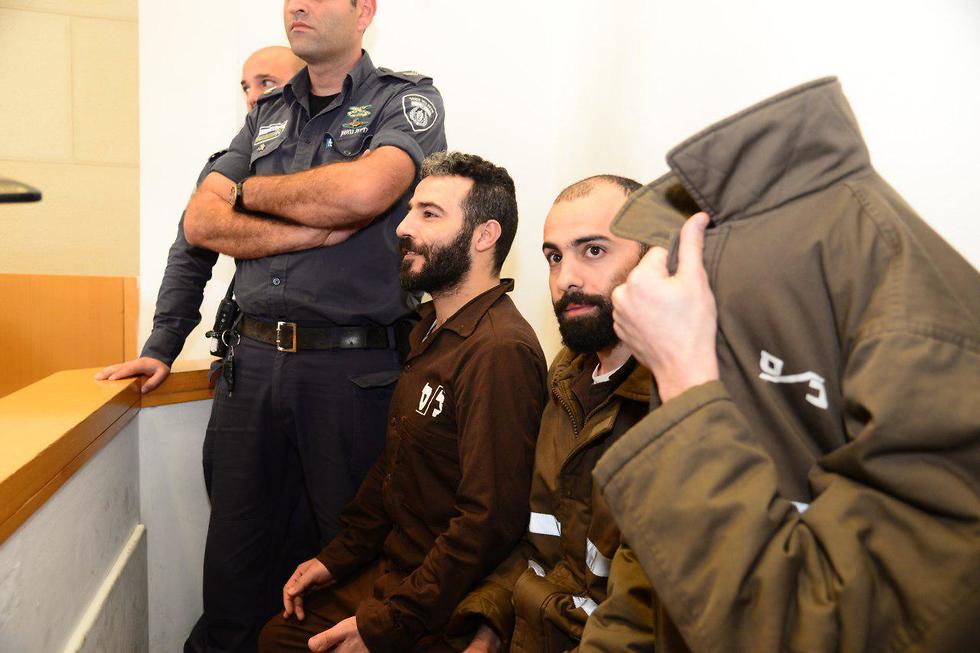 Romain Franck, a driver in the French consulate in east Jerusalem, joined an arms smuggling network, helping them transport weapons from Gaza to the West Bank in return for thousands of shekels; he used his diplomatic vehicle to avoid physical search at the border crossing.

Romain Franck, a French national, and five others were indicted Monday afternoon for smuggling weapons from Hamas in the Gaza Strip to the West Bank.

Franck, 24, a driver in the French Consulate in east Jerusalem, used his diplomatic vehicle to avoid security checks at the Erez border crossing.

He was charged with import, trade, carrying, transporting and possession of weapons, as well as with fraudulently obtaining benefits under aggravated circumstances.

Romain Franck and two of the other defendants in court (Photo: Herzl Yosef)
Franck used a Toyota car with diplomatic plates to drive consulate staff from Israel to the Gaza Strip and back through the Erez border crossing. He also had a Citroën vehicle with diplomatic plates, which he used for his own personal needs, driving from Jerusalem to Ramallah through the Qalandiya checkpoint. Vehicles with diplomatic license plates are subject to less stringent security checks at crossings, something Franck allegedly took advantage of.

According to the indictment, Franck and Zouhier, an employee at the French Cultural Center in Gaza, knew each other through Franck's work and his frequent trips to the strip. At Zouhier's request, Franck would transport different valuables from Gaza into Israel in return for payment, while taking advantage of the free passage afforded to his diplomatic vehicle at the Erez border crossing.

Romain Franck
In November 2017, Zouhier offered Franck to join a network with another Gaza resident, Muhammad Jamal al-Khaldi, that would smuggle weapons from the Gaza Strip through the Erez crossing into Israel and then to others in the West Bank. Zouhier told Franck he would be financially compensated for his "services," and the latter agreed. Later, other defendants joined this network, including Mufak al Ajluni from the West Bank; Ahmad Majdi Arabid, a Gaza residents who was living in the West Bank; Mohammed Katot, another Gaza resident living in the West Bank; and Anwar Anati Wanazam Muhlwes, a resident of east Jerusalem. Franck then offered Muhammad Siyad, a consulate employee and resident of Israel, to join the arms smuggling network and aid him by accompanying him to some of his trips to the West Bank with the weapons, and Siyad agreed.

The indictments detail five instances in which the defendants smuggled weapons from the Gaza Strip to the West Bank for different sums of money.

In most instances, Franck would meet with Zouhier in Gaza and receive a certain amount of weapons from him, wrapped in plastic and stored inside a suitcase. In return, Franck would receive thousands of shekels.

In one case, Franck received $700 for smuggling five or six guns. In another, he received NIS 5,000, and in a third instance he received some NIS 10,500 to smuggle 17 guns and a rifle. In total, Franck and the arms smuggling network are suspected to have smuggled some 70 handguns and two rifles out of Gaza.

Franck would then put the package in his bag, place it in the trunk of the Toyota diplomatic vehicle and drive with it to the Erez crossing. At the crossing, he falsely declared that all of the bags in the vehicle belonged to him and to the passenger traveling with him, and that he was not carrying any weapons. This allowed him to avoid a physical inspection of his car.

The vehicle used by the French driver to transport the weapons (Photo: Shin Bet)

After bringing the package with the weapons into Israel, Franck traveled to the West Bank with the Citroën vehicle, where he delivered the package to one of the defendants. It was later passed on to the other defendants, who sold the guns.

The prosecution has asked the court to order the detainment of the six defendants until the end of the legal proceedings against them.

The investigation found that Franck acted for financial gain, of his own accord and unbeknownst to his superiors. It also found that several of the suspects were involved in smuggling funds from the Gaza Strip to the West Bank.

The French embassy in Israel said on Monday it was cooperating with Israel in the investigation. “We take very seriously this case ... and we work very closely with the Israeli authorities on this matter,” said an embassy spokesman, who declined to comment further on the allegations against the staffer, a French citizen.

According to his Facebook page, Franck, who is from Lambersart in the north of France, arrived in Jerusalem in January 2017. "It's the big day, starting to a new adventure.. Thank you for everything that accompanied me and supported in this new experience that begins!" he wrote at the time.

Later he posted many photos from the region, including from Petra and Aqaba in Jordan, the Palestinian Authority and the Jordan Valley.

A senior Shin Bet official stated this was "a very grave incident in which the immunity and privileges granted to foreign missions in Israel was cynically exploited in order to smuggle dozens of weapons, which could have been used in terrorist attacks against Israeli civilians and members of the security forces."

An Israeli official called the incident "very grave," but clarified it would not affect Israel's ties with France. "We thank French authorities for the cooperation," he said.

The Coordinator of Government Activities in the Territories, Maj. Gen. Yoav Mordechai, also slammed the "cynical and never-ending exploitation of humanitarian aid and international aid by the terrorist infrastructure."

"This event only clarifies the need for a strict policy on granting (entry) permits," he continued. "International bodies are required to carry out internal inspections to ensure aid goes to the residents of Gaza and not to terror."

The French Embassy in Israel issued a statement confirming that a consulate employee had been arrested, saying it was treating the incident with "great importance," but wouldn't discuss the case itself. The embassy said it was in contact with Israeli authorities and the suspect's family, and was opening an internal investigation into the matter.