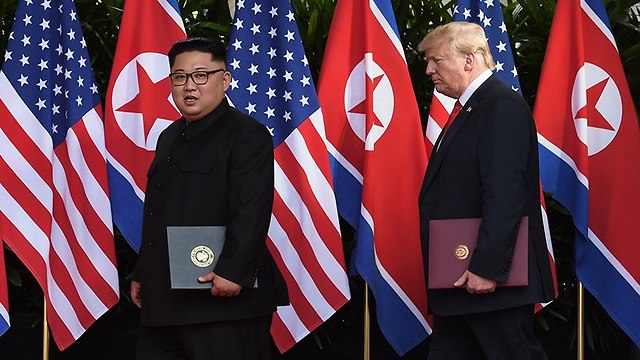 The US president tells Fox News following his meeting with the North Korean leader, ‘He can now call me if he has any difficulties, I can call him’; challenging criticism of his vague joint statement with Kim, Trump says he got ‘everything’ in the deal.

US President Donald Trump said on Friday he planned to call North Korean leader Kim Jong-un on Sunday, following their summit in Singapore this week.

"I'm going to be actually calling North Korea," Trump told Fox News in an interview on the North Lawn of the White House when asked what he planned to do on Father's Day.

The president later told reporters in an impromptu news conference on the White House lawn he had given Kim a phone number to allow him to reach Trump directly.

"He can now call me if he has any difficulties, I can call him," Trump said.

The president added that North Korea had started returning the remains of US soldiers missing during the Korean War.

Defending his meeting with Kim, he said "they are already starting to produce the remains of these great soldiers."

Trump also said returning a military salute to a North Korean three-star general was being respectful. When Kim speaks "his people sit up for attention,” he said. “I want my people to do the same."

Trump challenged criticism of his vague joint statement with Kim. He said he got "everything" in the deal.

"If you don't agree to meet, you know what you will have? You will have nuclear war," he said.

Following their meeting in Singapore on Tuesday, Trump and Kim issued a joint statement that reaffirmed the North's commitment to "work toward complete denuclearization of the Korean Peninsula," while Trump "committed to provide security guarantees."

Democratic critics in the United States said the agreement was short on detail and the Republican president had made too many concessions to Kim, whose country is under UN sanctions for its nuclear and weapons programs and is widely condemned for human rights abuses.

Asked about defending Kim's human rights record, Trump told reporters, "you know why, I don't want to see a nuclear weapon destroy you and your family... I want to have a good relationship with North Korea."