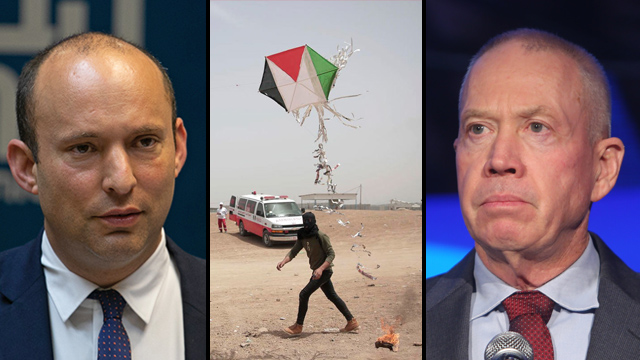 “Inexperience in using force leads to a power trip,” Galant told Ynet. “It would be a serious mistake to fire at an eight-year-old child, especially intentionally.”

Bennett responded to the claim on Twitter: “The shooting terrorists are not eight years old. That’s false propaganda being spread by our enemies. You should shoot anyone who fires at your family and your people and dispatched incendiary and explosive balloons. It’s so clear that I can’t believe I have to explain it. Restraint leads to escalation.”

Galant clarified that shooting at kite launchers won’t lead to the desired outcome. “The Palestinians will send 1,000 eight-year-old children. Only someone who doesn’t understand the picture in Gaza fails to understand how it works. They take an eight-year-old child and give him candy. He can’t think clearly, and you want us to fire a missile from a UAV at him? That’s not only ridiculous, it’s not only cruel, but it’s also foolish,” Galant said.

He was asked whether Israel should target those who send and encourage the kite flyers instead and perhaps resume its target assassinations policy.

“That’s something I’ve suggested more than once,” Galant replied. “I’ve made it clear and I’m make it clear again here to the Hamas people, with whom I have been holding a dialogue of fighting for many years. We understand that there are no spontaneous phenomena in which dozens of hundreds of children and youth launch kites without being guided by someone. If necessary, we will reach that someone and those above that someone and target them, and Hamas won’t escape this matter.

“I’m not making any statements about what we haven’t done yet. All I’m saying is that all options are on the table. Apart from winning the battle, the battlefield is important, and Hamas won’t be the one to determine the battlefield. In other words, if it thinks it can send people to the fence and children to launch kites and that’s all we will deal with, it’s wrong.

“We will hit Hamas’ assets, Hamas’ people, Hamas’ targets. And when we are required to do so, we will step up the pace. If needed, we will hit them into a reality they will regret. There is a long distance between that and targeting eight-year-old children. I am against that from an ethical and moral perspective too, and I see the actual suggestion and consideration of that a foolish act.”

A kite launcher in Gaza. ‘They take an eight-year-old child and give him candy. He can’t think clearly, and you want us to fire a missile from a UAV at him?’

As for the possibility of an IDF ground operation in Gaza, Galant said: “They are relying on a process in which we will fight others (referring to the northern front and the Iranian entrenchment in Syria) and they will wear us out. Well, they are wrong. If necessary, definitely from a military perspective, we will get Hamas down on its knees to a very difficult situation.

“Having said that, we don’t want to occupy the Gaza Strip, because we have no interest in being there, so we should try to reach a stable situation in a round that will be as short as possible and not after a long move that will bring us back to the same situation.

“We don’t want to deteriorate for obvious reasons,” the minister added. We have no interest in controlling Gaza. We want peace and quiet, we don’t want any responsibility there and we also want a demilitarization. These are interests which somewhat contradict each other, but we will find the way to do it and we need long periods of calm, first of all for the citizens and, second, because we have other issues to deal with, in the security area too.”

Galant’s party leader, Finance Minister Moshe Kahlon, said Wednesday during an economic-industrial conference that “Hamas has only one goal right now, and that’s to get us into international trouble. They have no problem using children and civilian for that purpose. Hamas’ activities could drag us to places which are neither in their working plan nor in ours. As a sovereign state, we must not accept that drizzle. I trust the IDF and I am certain it will provide the proper response, just like it has provided a response to much more complicated problems.”