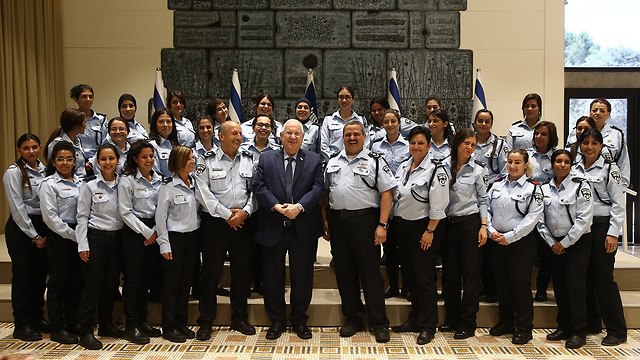 President Rivlin and Police chief meet with 29 of the fresh recruits, who say that despite prejudices they have encountered in their sector, to serve in the police is their mission; Rivlin praises knocking ‘down the barriers to make us all come closer together.’

President Reuven Rivlin and Police Commissioner Roni Alsheikh met with female police officers from the Arab sector on Wednesday to promote and encourage Arab women to join the police ranks.

During the meeting which was held at the President's Residence in Jerusalem, Rivlin said, "Your presence not only stresses the (advancement of gender equality—ed) but also changes (progressing in the Arab sector-ed)."

"Your actions prove Arab women have the ability to integrate in the public sector, to take down the barriers and to make us all come closer together," Rivlin added proudly.

The administration was established in June 2016 aiming to open additional police stations in the Arab sector, integrate them into the police ranks and to hold community activities meant to find mutual grounds for the Jewish and Arab societies, and by doing so bringing them closer together.

Since the administration's establishment, 728 Arab police officers have joined the police, with 74 being women.

Twenty-nine female Arab police officers attended the meeting and spoke about the challenges they face and the importance they see in their work.

"It was said it's not dignified to have an Arab woman serving in the police," Southern District investigator Inas Abu Wasel said.

"It's not easy facing stigmas in the (Arab) sector. I've heard things like 'It's not your country and an Arab questioning an Arab is unacceptable,'" she elaborated.

"A man can have any job he wants and not be judged as a woman. A woman (in the Arab sector) raises children and the entire house relies on her and therefore it's less common (for the woman to work-ed),' Wasel added. "However, one can see the transformation (in the Arab society). I'm on a mission for (my) country."

President Rivlin replied, "The country belongs to both of us. If we work together, if we recognize the unique needs of the Arab society and we wisen up and understand that the defense establishment is working for the good of all of us—all of Israel's citizens—we could live here in prosperity, security and peace.

"You, our dear police officers, have chosen to assume responsibility for our society and act upon it. Despite prejudices, you've proven not only you can do it, but that you are extremely capable in doing it," he concluded.

Police Commissioner Roni Alsheikh also spoke about integrating Arab women into the police force and said the police aim to expand the number of women joining and to promote the women's command potential.

"Our main goal is to give each and every citizen the feeling he is represented in the Israel Police. This is why we strive to recruit female and male police officers from the Arab sector," Alsheikh said.

"An Umm al-Fahm resident who knows his brother is reinforcing the law as a police officer in Rishon LeZion understands the police represents him as well," the commissioner explained.

"The women who are present here today are those who dared to take a step forward and they are truly revolutionaries in the Arab sector. When I look at those young women with their sense of mission I know we are on the right track to make the change we are all wishing for," he concluded.