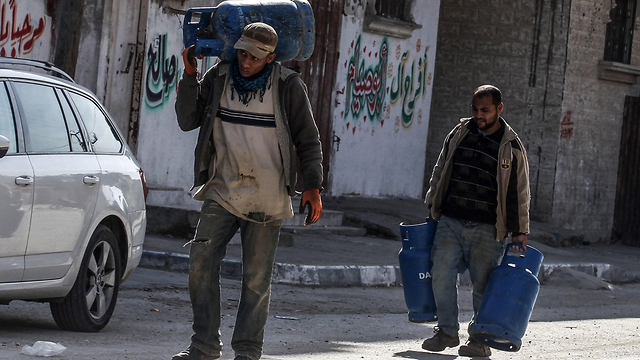 Among the humanitarian issues plaguing Gaza are the lack of electricity, drinking water and working sewage system; Americans reportedly pushing for the construction of a port, desalination plant and solar energy grid in the northern Sinai Peninsula near the Gaza border.

Acting on the assumption that economic development provides the necessary impetus for any proposed Israeli-Palestinian peace plan, the Trump administration has called on Arab states to invest hundreds of millions of dollars in infrastructure development projects in the Gaza Strip.

The US government is reportedly seeking to raise over $500 million from Gulf nations, as well as encourage close cooperation between Israel and Egypt to implement the plan. The move suggests the White House aims to stabilize the chaotic Palestinian enclave as it prepares to unveil its long-awaited peace plan. To this end, senior adviser and son-in law to President Donald Trump, Jared Kushner, and US peace envoy Jason Greenblatt worked to drum up support for the initiatives in their meetings this week with the leaders of Israel, Jordan, Egypt, Saudi Arabia and Qatar. Thus far, American officials have been reluctant to share details of the peace plan, in particular, before discussing it with regional officials.

(Photo: AFP)
Reacting to the proposal on Gaza, a spokesman for Palestinian Authority President Mahmoud Abbas issued a statement this week blaming the Trump administration of trying to drive a wedge between the coastal enclave and the West Bank under the guise of “humanitarian aid or rehabilitation.” The spokesman also accused the US of seeking to blur the conflict's core political disputes by turning Gaza into a humanitarian issue. “There is no state in Gaza and there is no state without Gaza,” he wrote in the statement. “On this issue, there’s a Palestinian, Arab and international consensus, and we’re confident that the strength of the Palestinian people will thwart all the plots whose goal is to liquidate the Palestinian issue.”

Kushner and Greenblatt were not scheduled to meet with Palestinian negotiators, as the latter have refused to hold talks with US officials since President Trump made good on his pledge to recognize Jerusalem as Israel’s capital and relocate the US Embassy to the holy city.

(Photo: AFP)
The Gaza economic package aims to alleviate the territory’s deteriorating living conditions, which some maintain have fueled the recent deadly clashes on Israel’s border. Observers have flagged the need to overcome the lack of electricity, drinking water and working sewage system as a top priority. To that end, the American proposal reportedly calls for the construction of a port, desalination plant and solar energy grid in the northern Sinai Peninsula near the Gaza border. Though based in Sinai, the planned infrastructure projects would primarily serve Gaza’s needs. They may also incentivize the Egyptian government to improve security in Sinai where it has been battling to suppress Islamic State-affiliated terrorist cells. Gaza’s economic troubles have been exacerbated by an ongoing dispute between Hamas and the rival Palestinian Authority in the West Bank. The latter has cut salaries it pays to workers in Gaza as well as funds for electricity and other supplies destined for the enclave.

Carrying water jerrycan (Photo: Reuters)
Yossi Mekelberg, an expert on the Middle East peace process and Senior Consulting Rsearch Fellow at the London-based Chatham House, explained that any plan to alleviate Gaza’s humanitarian crisis would certainly be welcome. But, he qualified to The Media Line, any plan that avoids “dealing with the root causes of the conflict” is destined to fail. “If anyone thinks that the Palestinians are going to give up their political, civil, and human rights just because they have a better life, I think they get it totally wrong and haven’t done their homework about the conflict,” Mekelberg asserted.

(Photo: AFP)
He also expressed limited expectations for the Gaza initiative, while criticizing the Trump administration for cutting much-needed funding to the United Nations Relief and Works Agency for Palestinian refugees. “This organization, which does a tremendous job, really struggles under great pressures to provide basic services—whether it is in Gaza, the West bank, Syria or Lebanon.”

Dr. Seth J. Frantzman, Executive Director of the Middle East Center for Research and Analysis, stressed that reports about the US plan for Gaza are unconfirmed.

“The idea is likely to (test the water) to see if such a plan would find support in Egypt and the region. It is also likely to add controversy to the US administration’s drive for an Israel-Palestinian deal,” he told The Media Line.

Gazans getting electricity from public infrastructure (Photo: MCT)
“Reasons to be suspicious of this plan are that the price tag is only $500 million, which is not enough for a major industrial area to support Gaza, and that Egypt has sought to isolate Gaza, not provide infrastructure for it.” Dr. Frantzman further explained that because the reconciliation deal between Hamas and the PA fell through last year, it is highly unlikely that Gulf money would be allocated to support Gaza or other projects. Saudi Arabia, which has been keen to purchase US arms and is seeking closer relations with Washington, has not shown real interest in other schemes to support US policy in Syria, or Gaza.

Moreover, he concluded, “without full-throttle support from (Cairo) no plans for infrastructure in Sinai related to Gaza will ever become reality. The fact that Abbas has condemned the US plan adds evidence to it being unlikely.”