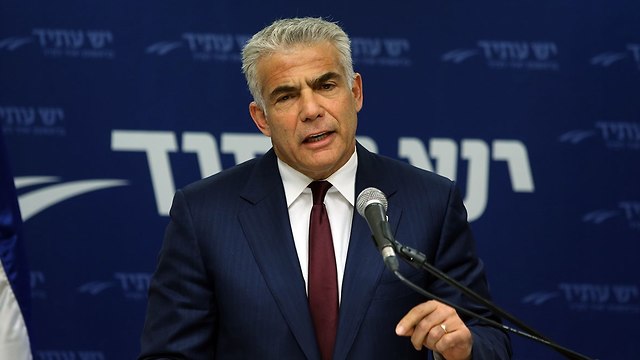 The IDF draft law will go up to a vote in the Knesset on Monday; while the Haredi coalition partners object to it, opposition party Yesh Atid plans to vote in favor; Zionist Union mark vote as no-confidence vote against government.

MK Yair Lapid's Yesh Atid party, which is in the opposition, is expected to vote in favor of the new IDF draft law on Monday, essentially helping the legislation pass its first Knesset reading despite strong objection from the ultra-Orthodox parties in the coalition. The existing Israeli Defense Service Law expires in September after the High Court of Justice deemed it unconstitutional, and so the Knesset must pass an alternative law before then.

At the beginning of the week, Prime Minister Benjamin Netanyahu assured that "After the bill’s first reading, there will be a discussion between all the members of the coalition in order to reach a broad consensus ahead of the second and third readings."

Netanyahu's Likud party, as well as coalition partners Yisrael Beytenu, Bayit Yehudi and Kulanu, all plan to vote in favor of the legislation. The Haredi parties are expected to vote against the bill, which could lead to the Haredi ministers' dismissal and the collapse of the government.

In the opposition, opinions are split. The Joint List's MKs will be absent from the vote, while Zionist Union and Meretz will vote against the bill and Yesh Atid will vote in favor.

Haredim at the IDF recruitment center (Photo: Yuval Chen)
MK Yair Lapid, who was behind a previous draft law, which has since been amended by the current government, came under fire for his support of the new legislation. "This draft law is 'Isra-bluff,' and the first to know it are the Haredim. They say with a wink that they're going to vote against the bill, but they love it," Meretz leader MK Tamar Zandberg said Saturday. "It would be a joke if the party to save this government would be Yesh Atid from the opposition. If there's an opportunity to bring down a terrible government, we need to unite and do that," she continued. "I don't know of a more important responsibility as an opposition than to come together and bring down the most bad and extremist government in the country's history." Lapid, meanwhile, asserted that "this is actually Yesh Atid's law. It's not a coincidence that the Haredim object to it. It was born following our victory at the High Court, and its basic principles are taken from the law we passed in the previous government. The IDF and its chief support it, and what's most important is that it would lead to more Haredim enlisting and more Haredim going to work."

Haredi man near the Jerusalem recruitment office (Photo: Office)
He rejected the claim the legislation does not include criminal sanctions. "There actually are (sanctions). The bill specifically determines that if after three years the Haredim don't meet enlistment quotas, the criminal sanctions will go into effect. In addition, the bill determines draft dodgers - including seculars - will go to prison," Lapid said.

MK Elazar Stern of Yesh Atid, the former head of the IDF's Manpower Directorate, defended his party's support of the legislation in an interview with Ynet on Thursday.

"The question is not whether Yesh Atid is saving the government, but whether we're saving the people and bringing equality," Stern insisted. "We're not focusing on the political issue. There's no reason for the government to exist for one more day. But the question is about the draft law, and in this context we're glad Yesh Atid's principles have been adopted."

MK Elazar Stern (Photo: Yaron Berner)
The Zionist Union party says the vote on the draft law would essentially be a no-confidence vote against the government, and anyone voting in favor of the law is giving the Netanyahu government more time. MK Yoel Hasson, the Zionist Union's Knesset faction head, explained that "Unfortunately, the current law is problematic and filled with holes, and its exclusive purpose is to continue deceiving the High Court while winking at the Haredi parties. Yesh Atid and the Haredi parties will have to decide once and for all where they stand: In favor or against the government. It's time to reveal their true faces." MK Omer Bar-Lev, also of the Zionist Union, said Saturday that "the draft law exposes the height of hypocrisy of Yesh Atid, and the back flip the party's doing at the expense of equal sharing of the service burden."

One senior Zionist Union official, however, had doubts about his party's stance. "The IDF determined its position on the enlistment of Haredim and in the end, we're the ones opposing the law along with Agudat Yisrael (Hasidic faction in United Torah Judaism) and the Arabs," he said. "We should've bypassed Lapid and voted in favor. In such an issue, you cannot stand with the Arabs and the Haredim and against the IDF's position."

Yuval Karni contributed to this story.