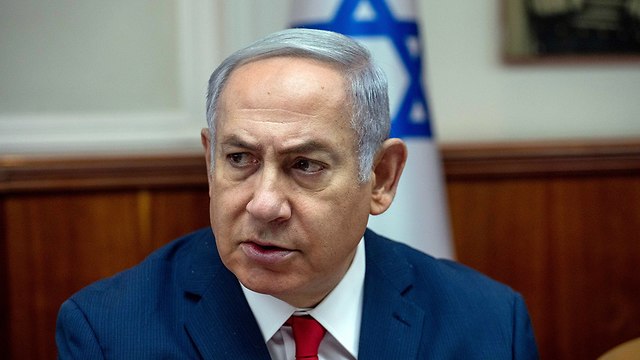 Netanyahu says will 'give expression' to historians' criticism on Polish statement

PM says objective of talks with Polish governments to cancel criminal articles in controversial Holocaust law was achieved; adds that 'I have listened to the comments from historians, including about things that were not included in the statement. I respect these comments.'

Prime Minister Benjamin Netanyahu, who came under fire for his joint statement with Polish Prime Minister Mateusz Morawiecki, said Sunday that he "heard the comments from the historians, and I will give it expression."

He went on to note that "The declaration that was published following the change in the law was overseen by a senior historian. owever, various comments were made after its publication. I have listened intently to the comments of the historians, including about several things that were not included in the declaration. I respect this and I will give expression to it."

Prime Minister Netanyahu (Photo: Ohad Zwigenberg)
The prime minister also addressed his upcoming trip to Russia, during which he will watch the World Cup semi finals with President Vladimir Putin.

"We meet from time to time to ensure security coordination and, of course, to discuss regional developments," Netanyahu said of Putin. "At the meeting I will reiterate the two basic principles of Israel's policy: First, we will not tolerate the establishment of a military presence by Iran and its proxies anywhere in Syria – not close to the border and not far away from it. Second, we will demand that Syria, and the Syrian military, strictly uphold the 1974 Separation of Forces Agreement."

Last week, Poland's ruling conservatives watered down the law, which had drawn Israeli and US condemnation, and removed the threat of jail terms for anyone suggesting the nation was complicit in Nazi crimes against the Jews.

Their statement went on to praise the wartime Polish government-in-exile, saying it tried to "raise awareness among Western allies of the systematic murder" of Polish Jews