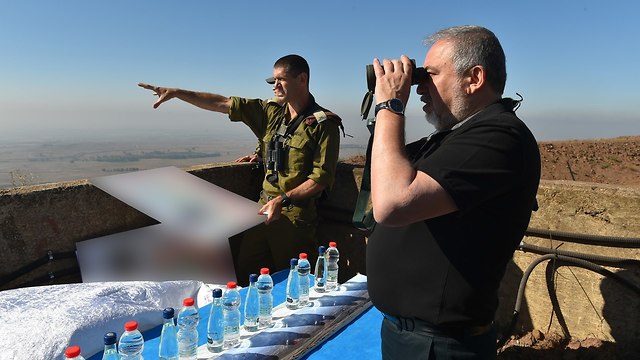 Lieberman: We see attempts to establish terror network in Golan

Defense Minister Avigdor Lieberman warns Iranian-Shiite militias against establishing terror infrastructure in the Golan Heights under the auspices of the Syrian regime, adding Israel is 'ready to provide humanitarian aid, not ready to accept a single refugee into Israeli territory.'

Defense Minister Avigdor Lieberman warned Tuesday the pro-Iranian Shiite militias in the Syrian Golan Heights not to try to establish a terror network on the border with Israel.

"We consider the (Syrian) regime responsible, and it will pay the price for cooperating with the axis organizations."

Lieberman also visited the battlefield in Tel Saki, where he talked about, among other things, the humanitarian situation on the Syrian border.

“I've been here since last night, with the GOC Northern Command and the divisions’ commanders. I have to emphasize I am very impressed with the preparedness of our forces, especially in light of recent events," he said.

"We toured along the border and saw the refugees’ tents. We’re ready to provide humanitarian aid, but are not ready to accept a single refugee into Israeli territory," Lieberman stressed.

"We also expect strict adherence to the Disengagement Agreement from 1974. Any Syrian soldier who finds himself in the buffer zone is risking his life. In other areas as well, we’ll be strict about having the amount of forces in accordance with the agreement,” the defense minister added.

However, Lieberman appeared to signal acknowledgment that Assad would regain control of the Syrian side of the Golan.

Asked by a reporter if he anticipated a time when Quneitra crossing would be reopened under the UN-monitored armistice between Israel and Syria, and whether the two old enemies could establish "some kind of relationship", Lieberman said: "I reckon we are a long way from that, but we are not ruling out anything."

Lieberman also said removing Iranian forces 40 kilometers away from the Israeli border would not be enough. “The fact Iranian forces are present in Syria at all is unacceptable, and we will act against any Iranian consolidation in the area,” he said.

Lieberman also talked about the decision to shut down the Kerem Shalom border crossing with Gaza.

“Kerem Shalom would remain open only for the transfer of food and medicine. The decision was made yesterday (Monday), and the implementation starts today. I hope the message has been received by the leaders of Hamas, and we will see an immediate cessation of the arson terror,” explained the defense minister.

Earlier this month, the IDF increased its presence on the Syrian border with armored and artillery forces.

Prime Minister Benjamin Netanyahu reinforced the defense minister’s sentiments on Tuesday. “We’ll continue to protect our borders. We’ll continue to provide humanitarian aid, but we will not allow entry into Israel. I am in constant contact with Kremlin and the White House with regards to this issue," he said.