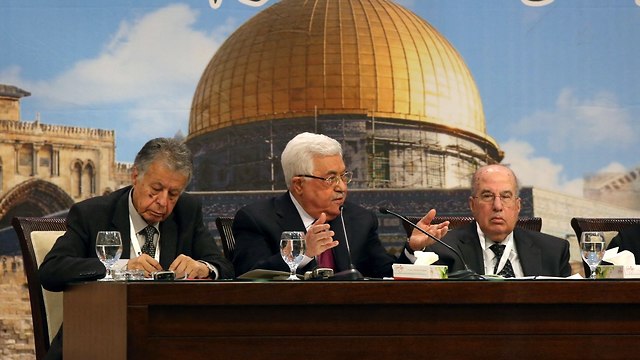 PLO to convene over Israeli legislation that 'Judaizes Palestinian lands'

In the wake of Israeli efforts to demolish Bedouin West Bank village of Khan al-Ahmar, and law deducting terrorists' salaries from funds to PA, Palestinians to convene PLO Executive Committee to 'discuss ways to confront the latest Israeli violations.'

The Palestinian Liberation Organization's (PLO) Executive Committee will meet at the beginning of August to confront what many Palestinians see as a series of US-supported Israeli legislation that weakens the two-state solution and “Judaizes” Palestinian lands.

“We (PLO members) are holding an urgent meeting of our Central Committee to discuss ways to confront the latest Israeli violations,” Rawhi Fatouh, a member of the PLO Central Committee, told The Media Line.

“What is required now is to end Palestinian division and forge a united national spirit in defeating (US President Donald) Trump’s ‘deal of the century.’”

Fatouh then explained that Israeli attempts to “Judaize” Palestinian lands, especially those around Jerusalem, aim to divide the West Bank into two parts.

Last week, dozens of Palestinian, Israeli, and international activists tried to block Israeli bulldozers and other heavy equipment from dismantling Khan al-Ahmar, a Bedouin village east of Jerusalem. Israel says that houses in the village were constructed without the relevant building permits and pose a danger to village residents because of their proximity to a highway.

But activists contend that Bedouin villagers have lived at the site since the 1950s after the state evicted them from their Negev homes. The villagers had no alternative but to build without Israeli construction permits, which Palestinians say are difficult to obtain.

Bulldozers in Khan al-Ahmar (Photo: AFP)
Khan al-Ahmar is located in Area C of the West Bank, which includes both privately-owned Palestinian land and areas under Israeli administrative and security control based on the 1993 Oslo Accords. While the US and the international community have long pressured Israel not to build in Area C, many Palestinians feel that the Trump administration has eased up on this policy. This means, Fatouh contended, that Israel does not stand by either a two-state or a one-state solution. “That is crystal clear based on Israeli actions on the ground. Israel wants to expel Palestinians from their lands and Judaize these areas while continuing the occupation,” he asserted.

In response, he added, “solidarity and international support are the only two options Palestinians have.”

Nabil Abu Rudaineh, a spokesman for the PA, slammed the law, saying it amounted to a “declaration of war against the Palestinian people, their fighters, prisoners, and martyrs.”‭ Palestinians are also incensed about a bill in the Knesset that would allow Jewish Israelis to purchase land in the West Bank, land that Palestinians deem vital for a future state. The bill would allow any non-Arab or foreign citizen to purchase land in Area C. Saeb Erekat, the head of the PLO Executive Committee, told The Media Line that Israel and the US are implementing Trump’s “deal of the century” on the ground. The aim, he contended, is to destroy the two-state solution and replace it with a one-state/two systems arrangement, “which is apartheid.”

Saeb Erekat (Photo: Reuters)
“This Israeli-American project will fail as it won’t lead to any viable solution; it will only cause more chaos and tension,” Erekat said.  Erekat blamed Israel for taking advantage of Palestinian division by offering the Gaza Strip “humanitarian” projects designed to drive a wedge between the Palestinian leadership in the enclave and the West Bank. “We started by cutting off all communication with the current American administration, as it is no longer part of the peace process,” Erekat said, adding that the Palestinian leadership is now concerned primarily with eliciting support from the international community. “We approached the UN Security Council, the International Criminal Court, the UN Human Rights Council and the UN General Assembly, as well as different international organizations for support,” he said.