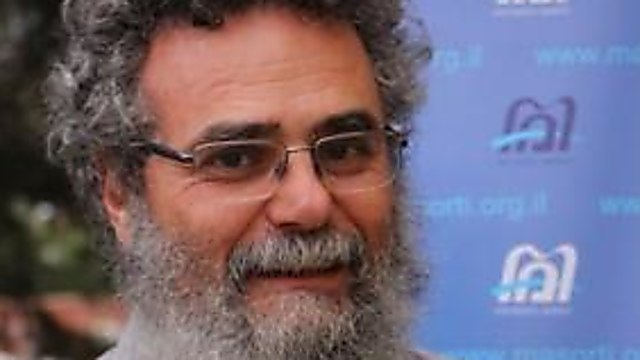 Police detains Rabbi Dubi Haiyun at 5:30am, saying he performs weddings without the authorization of the Chief Rabbinate; 'Iran is here,' rabbi says after being released; AG instructs police not to bring rabbi in for further questioning until suspicions of criminal offense established.

The Israel Police detained Conservative Rabbi Dubi Haiyun for questioning on Thursday morning, saying he performed "illegal" weddings without authorization of the Chief Rabbinate. But Attorney General Avichai Mandelblit ordered law enforcement not to call him in for further questioning until it becomes clear whether his actions are suspected as criminal.

Jewish weddings in Israel can only be legally performed by the Orthodox rabbinate, which other streams of Judaism consider an impingement on religious freedoms.

According to a post by Haiyun on Facebook, the police woke him up at 5:30am and brought him in for questioning. "Iran is here. It turns out the Orthodox Rabbinical Court in Haifa filed a complaint against me for performing weddings," wrote Haiyun, who heads the "Moriya" community in Haifa.

Rabbi Haiyun, like hundreds of Conservative rabbis in Israel who are not recognized by the rabbinate, has been performing weddings for many years—from the day he was ordained by the Conservative movement. He also served in the past as president of the The Rabbinical Assembly in Israel.

Haiyun was scheduled to teach a class on Wednesday at a special event marking the 9th of Av at the President's Residence, an event that has already become a tradition, where male and female rabbis from different streams teach.

The Masorti movement said that "the event was already publicized, in social networks as well. Apparently the motives for arresting the rabbi this morning were to cast a shadow over the event and embarrass the President's Residence."

Mandelblit's senior adviser, Dr. Gil Limon, explained the detainment to Knesset member Yael Cohen Paran (Zionist Union) in a letter, saying, "The police have requested Rabbi Haiyun to arrive at the police station nearest to him. However, he failed to report to the police."

"After not heeding a summons the police had sent Rabbi Haiyun, he was brought in today to the police station in Haifa. Following an initial inquiry into the matter and at the rabbi's request, his questioning was postponed to Monday," Limon wrote.

Dr. Limon said the attorney general carried out an initial inquiry into the matter and "instructed the police not to summon the rabbi for a criminal investigation on the matter until it becomes clear whether his actions are suspected as criminal."

The previous Knesset passed a law barring the holding of private wedding ceremonies according to the Halacha (Jewish law) without reporting it to the authorities. The penalty for breaking the law is a two year prison sentence both to the couple and the rabbi who performed the ceremony.

Despite the legislation, the attorney general has instructed law enforcement not to launch a criminal investigation against suspects in this offense.

In recent years, despite the criminal risk, more and more couples whose tradition is important to them, but are fed up with the rabbinate, get married in accordance with Halacha, but with "private" rabbis.

Director of Ruach Hiddush, Rabbis and Cantors for Religious Freedom and Equality in Israel, Rabbi and attorney Uri Regev, who represents Rabbi Haiyun, said that he intends to protest the detainment to the attorney general and the police.

Regev stressed that in the past he had demanded a clarification about the State Attorney's policy regarding the prosecution of rabbis that perform weddings outside the rabbinate, and it was made clear to him in writing that the law would be applied only in cases where the marriage is recognized by the rabbinate (and therefore can be registered).

"This is obviously not the case, and therefore the prosecution and the police should have stopped the investigation and the increasing violation of freedom of marriage and religious freedom in Israel," Regev said.

The Israel Police said in response that "it is the duty of the Israel Police to investigate any offense committed in violation of the law, and in particular in light of the binding decision of an authorized judicial institution in Israel."

"According to this judicial decision, earlier this week, the police summoned Rabbi Haiyun for questioning but he chose not to appear at the appointed time. Therefore, the police was forced to detain the rabbi for questioning on Thursday morning, and after the questioning was complete, he was released," added the police.

"It should be noted that The Israel Police is an executive authority that operates only in accordance with the provisions of the law (the legislative authority) and judicial decisions (the judicial authority). Hence, any complaint regarding the subject should be addressed to the decision making authorities, not to those who are obligated by law to enforce those decisions," the police concluded.

The Private Supervision organization, which announced last month its decision to perform private wedding ceremonies according to Jewish law outside The Chief Rabbinate, said that "persecuting rabbis will not bring couples back to the rabbinate, it will only push them further away.

"If the case details are correct, then the investigation of a religious man only because he married couples outside the rabbinate is an all-time low in the State of Israel," the organization added. "It seems that this investigation is the result of hysteria resulting from the loss of public trust in the Chief Rabbinate and an annual four percent drop in the number of couples married through the Chief Rabbinate."

"It is sad and concerning that there are those who prefer to intimidate rabbis instead of trying to correct policies that turn couple away from the Chief Rabbinate in the first place.

"We are not deterred by this delusional development, and we intend to begin our work in the coming weeks to provide a suitable and responsible response—while dealing with the limitations of the law—to couples marrying under the laws of Moses and Israel outside the rabbinate.

"Rabbi Haiyun is not a member of the Private Supervision organization—but it is important for us to express solidarity with him," concluded the organization.

Uri Keidar, executive director of Israel Hofsheet, said in response: "There is no other option besides the immediate legislation of a civil marriage law. We can't avoid the issue any longer, there is not enough time. At the beginning of the next session, a bill for civil marriage will be presented to the Knesset, and we will see who supports Israelis and who supports the Rabbinate. Until then, we expect the prime minister to call and apologize to Rabbi Haiyun."