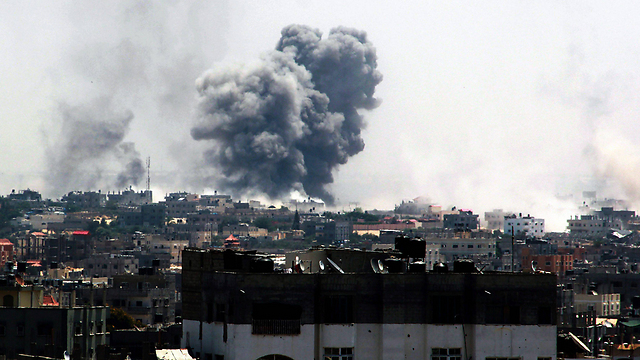 Investigation into heavy IDF bombardment of Rafah on August 1, 2014—after Lt. Hadar Goldin and two other soldiers were killed and Goldin was taken by Hamas—is still ongoing, with difficulty to obtain witness statements and the complexity of the fighting that day delaying the probe.

Four years after a Hamas ambush left Lt. Hadar Goldin and two other soldiers dead, the Military Advocate General has yet to decide whether to launch a criminal investigation into the events of what has been dubbed as "Rafah's Black Friday," or close the case.

The Hamas force was able to grab Goldin's body and drag him with them into a tunnel. His body remains in Hamas hands to this day.

The main reason why the case remains opened is the fact the IDF is having a hard time collecting testimonies from Palestinians or international elements who witnessed what happened that day.

IDF bombardments in Rafah on August 1, 2014 (Photo: EPA)
For the same reason, the IDF has a hard time fully reconstructing the many different operational events of that day, which began at 9am and lasted into the late afternoon, when the forces collected enough findings inside the Hamas tunnel to allow the IDF to declare Goldin a fallen soldier whose place of burial is unknown.

Furthermore, forces from many different units took part in the events of that day—from the elite Sayeret Matkal unit to engineering special forces, battalions from the Givati Brigade, the Armored Corps and the Artillery Corps, and the Air Force—making the investigation all the more complex.

The General Staff inquiry team that investigated the events of Rafah's Black Friday has completed its work and delivered its findings to Chief Military Advocate General Sharon Afek, but he ordered them to examine some additional lines of investigation before he could determine whether to launch a Criminal Investigation Division (CID) probe. Such an investigation is expected to include questioning under caution of IDF officers who led the fighting that day and possibly to indictments as well.

Goldin (in red) with Sarel and Gidoni (Photo: Yoav Zitun)

The IDF examined some 500 complaints received over a month and a half of fighting in the Gaza Strip in the summer of 2014, investigating some 300 of the complaints. In total, some 30 CID investigations were launched, but almost all of them were closed without any indictments filed or disciplinary action taken.

One such case that was closed without any steps taken was a suspected unsanctioned firing by IDF soldiers at a Palestinian clinic.

Captain Dima Levitas, company commander of the 7th Armored Brigade, was killed by a Palestinian sniper on July 22, along with Captain Natan Cohen. Dima's fellow soldiers, who were unable to attend his funeral because of continued fighting in the Gaza Strip, decided, as a tribute, to fire tank shells at the Palestinian clinic from which the sniper fire originated. His comrades-in-arms said the barrage was a salute in memory of their friend.

In fact, the only criminal incident during Protective Edge that resulted in imprisonment concerned Golani soldiers who looted a Palestinian home in Gaza City's Saja'iyya neighborhood.

IDF officials explained that there has been significant progress made in the investigation into the events of Rafah's Black Friday, and that the Military Advocate General's examination of the case was in advanced stages. The delay, they said, was due to the desire to conduct a thorough examination, while adhering to the IDF's values, Israeli law and international law.

The IDF Spokesman's Office offered the following response: "During Operation Protective Edge and after it, many claims and reports have been made concerning the violation of combat laws or other unusual conduct of IDF forces. The examination of hundreds of events has been completed. In many of the cases, the examination concluded there was no need to open an investigation. CID investigations were opened into more than 30 incidents, with almost all of them completed, and decisions have already been made with regards to their findings. Very few incidents, including complex fighting incidents, are still being examined. Their examination is done at the highest standards, and it is at advanced stages.

"The IDF dedicates a great deal of resources to complete the investigation and examination of the claims and reports that were made. Naturally, the examination and investigation of some of the incidents that occurred during long and intense fighting, in an area not under IDF control, and that involve residents of the Gaza Strip—which is under Hamas control—are complex and take time."