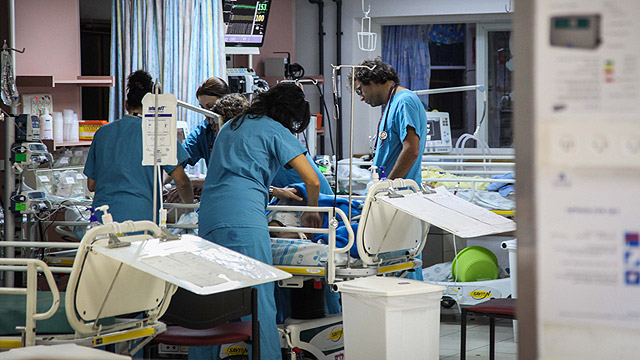 The nurses' union declares an all-out strike to take place at hospitals and clinics starting on Tuesday; union chair: 'Inconceivable that the government stands by as hospitals become war zones.'

The National Association of Nurses in Israel will launch a nation-wide strike on Tuesday that will last until further notice in protest of rising violence against health care personnel.

The strike will take place across all hospitals, clinics, and family health centers in Israel.

The nurses' union blamed the government for failing to deal with the violence against health care personnel and implement the recommendations of the Committee for the Elimination of Violence in the Health System, which were given last December.

The committee's conclusions, which include a recommendation to add security and police units at hospitals across the country, install security cameras in the public areas of all medical facilities and provide distress signal apps for every employee in the field.

In an interview with Ynet, Ilana Cohen, the Chairwoman of the National Association of Nurses in Israel, said that despite the fact that several months have passed since the publication of the committee's "nothing has been done."

"If there is no effective solution, the nurses will abandon their stations," she said.

"Until immediate action is taken to resolve the unbearable overcrowdedness in the hospitals system and protect the medical teams and health care employees—the nurses will not stand down," Cohen added.

"The nurses in Israel have decided that their blood is not cheap...It is unthinkable that nurses fight for their lives in intensive care while the ministers of Israel keep quiet," she concluded.

According to the chairman of the Histadrut Labor Federation, Avi Nissenkorn, the government "cannot stand idly by while nurses and medical teams, who dedicate themselves to saving lives, are attacked on a daily basis at their place of work."

Yaakov Litzman and the injured nurse (Photo: Office of the Minister of Health)

As part of the strike, all health system nurses throughout the country will offer limited-service only: operating rooms and intensive care departments will offer limited services, Epidemiology offices will treat urgent cases only, immunization clinics for persons travelling overseas will be closed, and nurses will not provide ambulatory services in clinics, health institutes, and day care centers.

Only one station for family health in each city will operate and treat premature babies and pregnant women at risk.

Blood samples—including infant screening tests and blood tests—will be taken at the health bureaus by an on-call nurse.

In addition, doctors in all area of expertise will not perform routine tests, and no reception services will be given.

In recent months there has been an increase in violence acts committed against helath-care personnel.

The most serious incident took place last month when Oscar Bahit, 31, an asylum seeker from Eritrea, stabbed a nurse in the abdomen at the Shmuel Harofe Geriatric Medical Center in the central city of Beer Yaakov.

Police investigation revealed that Bahit, who was a patient in the tuberculosis ward, arrived at the medical facility holding a large knife. According to the police, the man passed through the hospital's guards and did not obey their order to stop.

Bahit then entered the ward where he was hospitalized, ran into a security guard, and pointed the knife at him. In response, the security guard left the area running, leaving Bahit free to approach the staff.

The Eritrean man then approached nurse Rahel Kobo, who was standing nearby, and stabbed her in the abdomen. The security guard returned to the scene, drew his handgun, fired at Bahit, and missed.

A medical team and several security guards took over the situation, and detained the perpetrator until the police arrived.