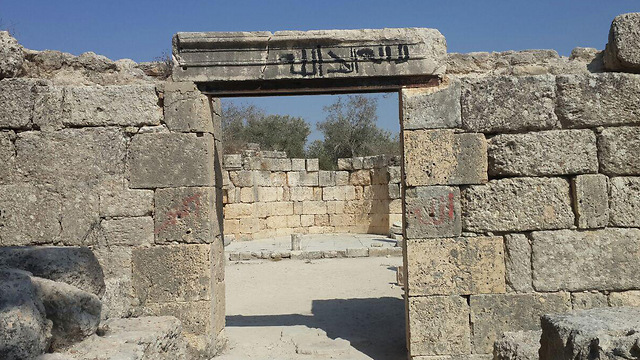 Palestinians were caught in the act damaging the Samaria archeological site and in possession of a metal detector and excavation equipment; court sentences them to 36 days in prison, 9 months suspended sentence, and gives them NIS 4,000 fine.

Three Palestinians were caught attempting to rob the ancient Sebastia archeological site in the Samaria region of the West Bank last month.

The three were caught in the act on July 18 at 1am by an Israeli Civil Administration archeology inspector and the IDF's Shavei Shomron company.

They were spotted damaging the site, also known as “biblical Samaria,” and in possession of a metal detector and excavation equipment.

The suspects were arrested and interrogated, and were later charged and convicted of damaging antiques and excavating an archeological site without a licence.

The three were sentenced to 36 days in prison and received a nine months suspended sentence and a NIS 4,000 fine each.

Benjamin Har-Even, of the Archaeology Unit at the Civil Administration, said that “law enforcement authorities will continue to use all the tools at their disposal in order to stop and prosecute criminals who damage important pieces of history, like the Sebastia site.”

The Sebastia archeological site is located near by a Palastinian village of the same name, in the Nablus area. Remains from site of display a First Temple and Hellenistic Period city and Roman through Byzantine settlements. Archeologists and historians are still studying the different peoples that lived in the region.

The large Sebastia archeological site represents the ancient capital of the kingdom of Israel, and according to the Book of Kings was established in 880 BCE by Israeli king Omri. Many well known biblical stories took place in this famous site, including stories about the Ahab palace, the four lepers at the city gates and the Amos prophecy about the destruction of Samaria.

The Sebastia site is divided between areas C and B: the site itself is in area C and under Israeli control, while the parking lot and road leading to the site are in area B.

The Palestinian village of Sebastia enjoys Christian pilgrim tourism, and buses packed with tourists and tour guides visit there freely. Israeli and Jewish visitors are required to be escorted closely and guarded by IDF forces.

The Sebastia remains are an important Jewish Heritage site. This is a second archeology-related criminal incident in the Samaria region, following a 2016 vandalism act of a 2,000-year-old Herodian marble pillar in the Sebastia National Park, and an earlier vandalism case just three months prior to that.

Past vandalism included graffiti writings against Christianity and Judaism, the vandalism of Christinan tombstones, antiquities' robbery, damaging seats in the Roman amphitheater and lining the biblical Ahab palace with cement and raising the Palestinian flag over it.