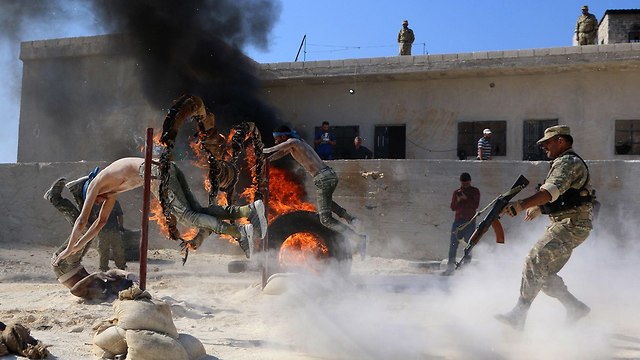 Israel secretly armed and funded 12 rebel organizations in south Syria, which in recent years have helped prevent pro-Iranian and ISIS fighters from establishing themselves near the Golan Heights, according to an article published Thursday in Foreign Policy magazine.

According to the report, more than twenty-four commanders and rank-and-file members of the rebel groups confirmed the claim. The report claims that the transfer of weapons to the groups, which ended this July, included assault rifles, machine guns, mortar shells and transport vehicles which were delivered by Israeli security forces through three gates on the Golan Heights.

Rebel groups hold military drill (Photo: AFP)
The gates are also used by the IDF to provide humanitarian aid to Syrian civilians caught up in the civil war. “Israel also provided salaries to rebel fighters, paying each one about $75 a month, and supplied additional money the groups used to buy arms on the Syrian black market, according to the rebels and local journalists,” the report says.

Despite the succour provided, discontent prevailed among the rebel groups, the report states, in light of the much larger quantities of assistance provided by other countries, including the Qatar, Saudi Arabia, Turkey, and the United States.

(Photo: IDF Spokesperson's Unit)
“Even at the height of the Israeli assistance program earlier this year, rebel commanders complained that it was insufficient,” Foreign Policy said. The report says that a spokesman for the Israeli Embassy in Washington declined to comment on the matter.