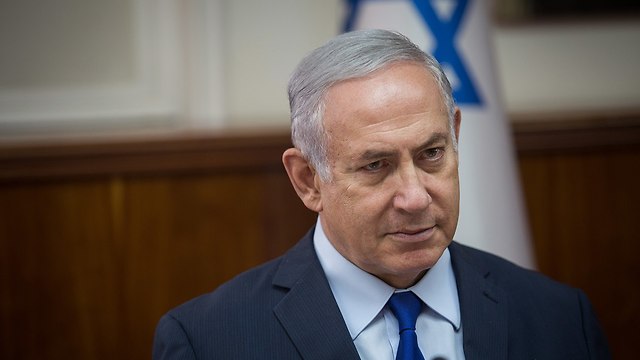 Citing 71 resolutions condemning Israel, Netanyahu says organization has slandered the Jewish state too many times and sought to deny the Jewish connection to Israel; says Israel will rejoin group when it 'ends its bias against Israel.'

Prime Minister Benjamin Netanyahu declined an invitation from the United Nations Educational, Scientific and Cultural Organization (UNESCO) to participate in a conference on anti-Semitism at the United Nations on September 26 2018.

"While I commend all efforts to combat anti-Semitism, I have decided not to participate in this week’s UNESCO conference on anti-Semitism due to the organization’s persistent and egregious bias against Israel,” Netanyahu said in a press statement.

PM Netanyahu (Photo: Flash90)
According to Netanyahu, UNESCO could only redeem itself and “remove this mark of shame” by doing more than host a conference on anti-Semitism. “It must stop practicing anti-Semitism.”

“No matter what UNESCO says, the Western Wall is not occupied Palestinian territory and the Cave of the Patriarchs—the burial site of Abraham and Sara, Isaac and Rebecca, Jacob, and Leah—is not a Palestinian Heritage Site,” Netanyahu said

The Heritage Committee of UNESCO adopted in July 2017 a Palestinian request to declare Hebron's Old City—and with it the Cave of the Patriarchs—as a Palestinian World Heritage Site, raising ire in Israel. In 2016, UNESCO's executive board formally adopted a controversial resolution which Israel said denies the deep historic Jewish connection to holy sites in Jerusalem. Israel withdrew from UNESCO in 2017, together with the US. Israel said that it had grown tired of "anti-Israel bias."

UNESCO's General Conference (Photo: AP)
“Israel and the United States made a clear moral statement that UNESCO’s anti-Semitism will no longer be tolerated,” Netanyahu’s statement said.

“If and when UNESCO ends its bias against Israel, stops denying history and starts standing up for the truth, Israel will be honored to rejoin.

“Until then, Israel will fight anti-Semitism at UNESCO and everywhere else," he concluded.