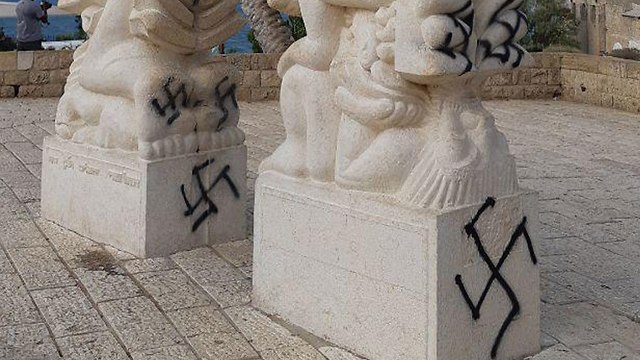 After security camera footage shows 37-year-old suspect spraying swastika in Tel Aviv, judge says he should remain under house arrest, rather than in police custody.

Police detained on Sunday a 37-year-old Tel Aviv resident on suspicion of spraying swastikas on walls and prominent landmarks in popular locations and recreation centers throughout the city that have left residents and tourists in shock over the past week.

Footage in which the suspect is seen spray-painting swastikas on the walls of Old Jaffa was provided to the police by illusionist Uri Geller whose home security camera documented the 37-year-old while committing the crime.

Geller told Ynet he heard the camera sensors alert going off at about 4am. However, he said he had decided to continue sleeping.

"In the morning I realized swastikas have been sprayed throughout Tel Aviv and Jaffa. The police officer told me many sculptures were ruined. And then I saw the swastikas under my window," he lamented.

"I was very angry," Geller recalled. "I notified the police and immediately send them the security camera footage, which they said helped them to locate the suspect."

"A good word is in order for the (Tel Aviv Municipality) employees who managed to take down the swastikas from the walls within hours," Geller opined.

The police representative said during the suspect's remand extension hearing that he had sprayed the swastikas and set fire to garbage cans while being under house arrest.

The Judge instructed the suspect to return to house arrest, adding that "there is no evidence indicating the suspect set fire to garbage cans."

Swastika found outside Dizengoff Center
The judge added he does not think spraying swastikas justifies taking the suspect into police custody.

The suspect's attorney Inbar Keinan said, "There is nothing linking (the suspect) to the garbage cans arson."

"Spraying swastikas does not constitute grounds for arrest. The suspect is currently under house arrest and can return to his mother's house," she concluded.