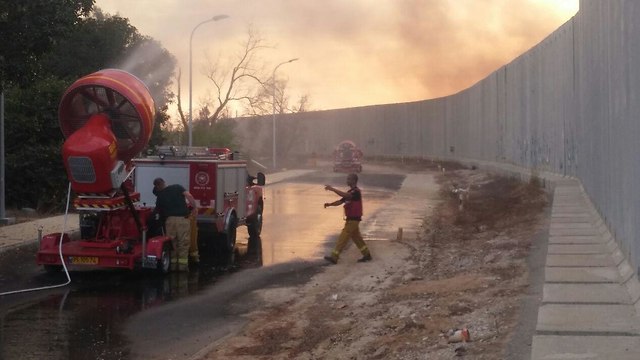 'We have ability to turn the Gaza border region and its settlements into a place that is not life worthy,' says newly elected Islamic Jihad leader.

The residents of Kibbutz Kerem Shalom have expressed their anger and frustration amid the continuous launching of incendiary kites and balloons into the Gaza border communities and the burning of tires during weekly "March of Return" riots on the Gaza border fence.

More than 2,000 fires have broken out during the past six month, consuming thousands of dunams of farmland and natural grove.

Throughout Friday, at least seven fires erupted in the Gaza border communities as a result of incendiary balloons flown into Israel from the strip. Firefighter teams gained control over the fires.

An average of 20 fires sparked per day as the kites and balloons terrorism began. Several months later, an average of 10 fires broke out each day, and currently the figures show some 12 conflagrations erupt daily.

Meanwhile, as the negotiations talks to achieve ceasefire between Israel and Hamas reached a dead end, the Gaza border fence riots turned much more violent.

Some 20,000 protesters gathered Friday along the Gaza border fence to take part in the weekly border clashes, burning tires and hurling explosive devices at IDF troops.

Kibbutz Kerem Shalom was covered with a cloud of thick smoke as a result of the tire burning.

Firefighting teams operating at the scene used super-sized fans in an attempt to prevent the smoke from penetrating into the Kibbutz.

Gaza Division Commander Brig. Gen. Yehuda Fuchs arrived in the community to encourage its residents. However, they lashed out at him saying, "The situation here is intolerable."

"The Palestinian protest is dictating our lives. We are living in a black suffocating cloud of smoke and tear gas," they vented.

"We don't intend to contain this situation, which disrupts our lives," the Kerem Shalom residents exclaimed.

"We are not talking about one or two incidents. This is our daily routine. How is it possible that the powerful State of Israel is unable to eradicate the tire burning phenomenon?" one of the resident wondered.

"We are strong and determined to stay here and raise our children, even under challenging conditions," he asserted.

Earlier, Yair Farjun, head of the Hof Ashkelon Regional Council, sent a letter to the Kerem Shalom residents regarding a possible escalation on the border fence.

"We are all aware of the option of a military escalation. The decision to increase the IDF forces deployment as well as Iron Dome batteries stress the concern of escalation. The IDF adopted a protocol according to which it faces security challenges and its activity is daily.

"The Ashkelon Regional Council is closely monitoring any security developments, and I'm in constant contact with the IDF and the security forces," Farjun wrote. "The instructions are to maintain routine procedure. The security coordinators and the emergency teams are informed, and are prepared to assist the Gaza border communities, its residents and all those seeking their help," he concluded.

During the weekend's border fence skirmishes, rioters set alight tires and threw explosive devices at IDF troops, who responded with riot control measures, which for the first time included the use of sponge-tipped bullets.

However, this week's protests were less violent than those taking place during the past few weeks.

The Hamas terror organization said that "The response to the Israeli threats against the March of Return campaign ... was the mass participation in the protests," adding that "those who participated decided that nothing would stop them from marching until their goals are achieved."

The Palestinian health ministry said that three demonstrators aged 12, 24, and 28 were killed during the riots, and 126 were wounded.

The IDF Spokesperson’s Unit said in a statement that in response to "grenades and explosive devices" hurled at troops during the protests, an IAF aircraft carried out two airstrikes on Hamas terror posts in the strip. The statement added that some protesters crossed the fence to throw grenades on Israeli territory before returning to the strip. No Israeli casualties were reported.

In addition, the newly elected leader of the Palestinian Islamic Jihad, Ziad Nakhala, spoke publicly for the first time since his official appointment a week ago, warning the Gaza border communities’ residents.

“Death is life for our people and life for our children, and capitulation is our death. The Israeli aggression against the 'March of Return' campaign and the killing of our people must stop,” he stated.

“The resistance must take responsibility for this. It has the ability to turn the Gaza border region and its settlements into a place that is not life worthy," Nakhala threatened.

Prior to the demosntartions, Defense Minister Avigdor Lieberman conveyed a message to Hamas leaders.

"We got through the High Holy Days just as we had planned, without a war erupting and while exacting a heavy price from the rioters on the Gaza border," Lieberman tweeted. "But the holidays are now behind us, and I tell the heads of Hamas: 'Take that into account.'"