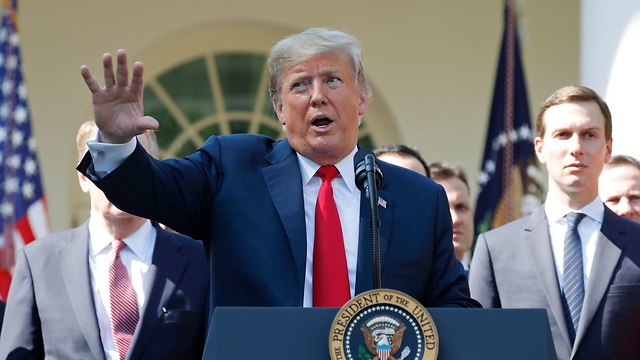 Rick Gates, a former aide in US President Donald Trump's campaign, sought a proposal from an Israeli intelligence firm for a smear campaign against Trump's Republican rivals as well as his Democratic opponent Hillary Clinton during the 2016 elections, the New York Times reported on Monday. According to the Times, Gates wanted to mount a disruption effort using fake online identifies, social media manipulations and intelligence gathering to win the elections. The investigative report, written by Times journalists Mark Mazzetti, Ronen Bergman, David D. Kirkpatrick and Maggie Haberman, presented a document dated April 2016, which said Israeli company Psy-Group "was asked to provide a proposal ... for campaign intelligence and influence services."

President Trump (Photo: AP)
The company proposed to employ "veteran intelligence officers" to use various methods to influence some 5,000 Republican delegates ahead of the Republican National Convention by obtaining "unique intel" via different means, including "covert sources." Psy-Group employees would then study the leanings of the delegates and use "authentic looking" fake online identities to send specially tailored messages to up to 2,500 of the delegates to sway them in favor of Trump, according to the documents obtained by the Times. Among other things, the bogus online personas would warn Republican delegates of Senator Ted Cruz's "ulterior motives or hidden plans," appearing to be former Cruz supporters or other influential figures sharing the same views and ideology as the target. Pricing the smear campaign at over $3 million, Psy-Group proposed to double its size by hiring some 50 new employees, including American citizens, and rent new office spaces, the Times reported, quoting former employees of the company.

The proposal to sabotage Clinton included information about her and her close associates obtained through “complementary intelligence activities,” according to the interviews conducted by The New York Times.

An additional Psy-Group proposal suggested to take advantage of the already existing inner divisions between Trump’s opponents and their campaigns, as well as target “undecided voters in battleground states”—again through fraudulent online profiles.

The secretive project was labeled “Project Rome,” and referred to Trump, Clinton and Cruz as Lion, Forest and Bear respectively.

According to The New York Times, the alleged conspiracy was first unveiled during Robert Mueller's investigatigation into Russia's interference with the 2016 election campaign, when Mueller's staff obtained copies of Psy-Group's proposals.

Gates first heard about the Israeli intelligence firm in March 2016, shortly after joining Trump's presidential campaign, during a meeting with George Birnbaum—a Republican advisor with connections to Israeli government officials.

This year, Gates pleaded guilty to several corruption charges, as part of the Mueller investigation, which included financial fraud and tax evasion.

According to an interview Birnbaum gave to The New York Times through his lawyer, Gates believed technology in general and social media in particular would be the best tools for manipulating the Republican delegates into favoring Trump over Cruz.

“He was interested in finding the technology to achieve what they were looking for,” Birnbaum said.

The report noted it is unclear whether Trump campaign eventually used the services of Psy-Group or whether the proposals in question violated American laws. Also, it is believed that Gates lost interest in the project once other campaign advisors came up with other social media strategies.

Nevertheless, Trump is reported to have met with the intelligence firm’s representatives on August 3, 2016, at Trump Tower, where Joel Zamel, the founder and one of the owners of Psy-Group, presented Trump and his aides the general outline of the proposals.

Zamel was questioned about the August 2016 meeting by Mueller's investigators. Additionally, "at least two FBI agents working on the inquiry" traveled to Israel to interview Psy-Group employees, and this year, after receiving a US federal government court order, the Israel Police seized the company’s computers. The company is now in the process of being liquidated.

Zamel’s attorney said his client never discussed “specific proposals” with Trump or anyone working for his campaign.

Despite this, Zamel was reportedly paid some $2 million after the election by one of Trump's associates, George Nader—advisor to the United Arab Emirates’ crown prince.

The New York Times writes that when questioned about the payment, Zamel and Nader—who was also present at the 2016 meeting—gave different accounts as to why the payment was made in the first place. During the meeting at Trump Tower, Nader had allegedly supported Zamel’s proposal due to UAE’s desire to put Trump in office.

The Mueller investigation is currently looking into the payment’s initial intent. The investigation is also trying to establish whether any other countries, besides Russia, had interfered with the 2016 elections in order to assist Trump, report stresses.

Nader has reportedly been questioned in connection with the case by authorities in Washington DC, New York, Atlanta and Tel Aviv.