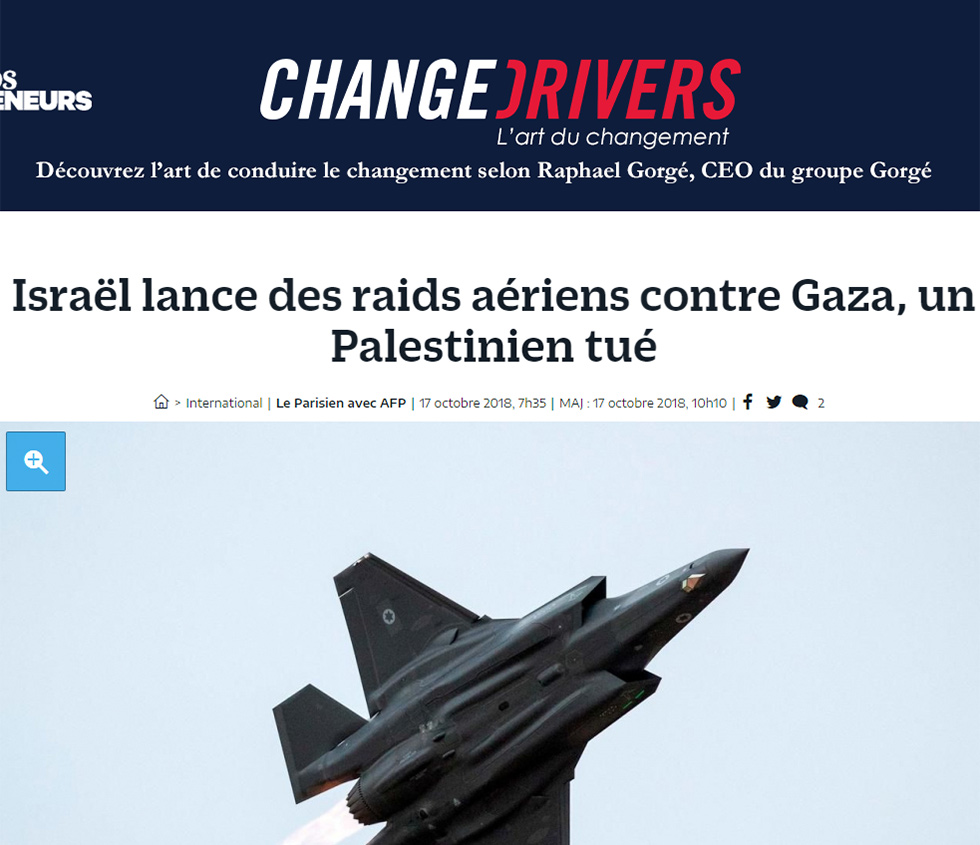 Israeli Embassy in Paris protests against French media coverage of recent rocket attack launched from Gaza towards Israel; headlines on popular French news sites "Le Parisien," "Le Figaro" focus on IDF retaliatory strikes in strip while ignoring the damage caused to a house in Be'er Sheva hit by one of the rockets.

The Israeli Embassy in Paris, in coordination with the IDF Spokesperson's Unit, protested Wednesday against the coverage of Wednesday morning's rocket attack by popular French news sites "Le Parisien," and "Le Figaro" which focused on Israel's retaliatory strikes, instead of reporting the damage caused to a house in Be'er Sheva by Gaza's rocket.

Following the protest, Le Parisien added a brief report about the rocket launch from Gaza: "A rocket fired Wednesday morning from Gaza into Israel causes damage in the city of Be'er Sheva."

Le Parisien's article begins with the Israeli strike in Gaza. "The Israeli Air Force launched an offensive against targets in the Gaza Strip, in response to a rocket launch from Palestinian territory, a Palestinian was killed. Footage of the Israeli army shows a Palestinian man, who was preparing to launch a rocket, who was shot dead as a result," the article read.

The article's next passage further details the Israeli attack, while focusing on the Palestinian side: "'Nazee Zanan, 25, was shot and killed in an air strike in the northern Gaza Strip,' the health minister said without elaborating. Meanwhile, the Israeli army published a video showing two men preparing to launch a rocket. One of them was wounded in an explosion soon thereafter, which apparently was carried out by Israeli forces."

(Photo: AFP)
There is no mention of the events that prompted Israel's retaliatory strike until the middle of the article, where, in a few words, the journalist describes the rocket that "hit a house in Be'er Sheva" while a woman and her three children, unharmed, were inside. The fact that the house was destroyed by the rocket was left out.

Le Figaro website's coverage began with a short breaking news report about an Israeli attack that ensued "after a rocket, fired by Palestinian fighters, hit a house in the Israeli city of Be'er Sheva, the IDF reported."

"According to Israeli Health Ministry's spokesperson, three people were hospitalized as a result," the article went on to state.

The house hit by the rocket

Le Figaro's following update described an Israeli attack on "20 different targets in the Gaza Strip" and adds that "Hamas condemns the rocket strike on Israel."

Almost four hours after the initial report, Le Figaro published that a Palestinian was "killed in an Israeli air strike", adding that the "Palestinian, according to IDF's footage, intended to launch a rocket."

In the next briefings it was reported that "Israel attacked 20 different targets in the Gaza Strip" and that "Hamas condemns the recent rocket fire on Israel."

In addition, the Libération news site reported that "Israeli Defense Minister Avigdor Lieberman ordered the closure of two crossings between Israel and Gaza, following a rocket attack on a city in southern Israel. The minister also restricted the fishing zone."

The Libération too focused on the Israeli strikes in Gaza, reporting, "Israel attacked about 20 targets throughout the Gaza Strip due to rocket fire, while blaming Hamas for the events."