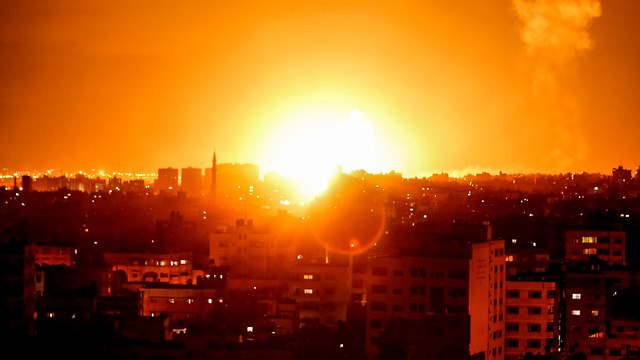 Gaza sources: Rocket launch was against Hamas' will

Palestinian sources in the strip claim rockets attack against Israel was done against the will of Hamas leadership; after feeling ignored during ceasefire talks, Islamic Jihad tried to show Egypt its disapproval by launching rockets; IDF: 'Hamas bears responsibility for everything happening in and out of the Gaza Strip.'

Palestinian sources in the Gaza Strip have told Ynet that the heavy rocket fire into Israeli border communities on Friday night was done against Hamas's will.

The attack was likely carried out by Islamic Jihad terrorists, who were signaling to Egyptian intelligence that they were dissatisfied with the fact they were being excluded in the ceasefire talks.

"The resistance cannot stand idly by in the face of the continued killing of people in cold blood by Israel," an Islamic Jihad official said in a statement Friday night.

"The resistance has long been committed to restraint in an effort to bring about a ceasefire... The resistance has repeatedly warned against harming civilians, but Israel has continued not to honor the law," the statement continued.

Although the attack was carried out by Islamic Jihad, the IDF emphasized that Israel still holds Hamas responsible for all fire out of Gaza and has seen no signs of Hamas trying to stop the fire.

"Hamas bears responsibility for everything happening in and out of the Gaza Strip, and it will bear the consequences for the terrorist acts carried out against Israeli citizens," the military said in a statement.

The IDF also accused Iran and Syria of directing the rocket fire. "We have seen and established a clear link between Gaza and Damascus. Orders and incentives were given from Damascus with a clear involvement of the Iranian Revolutionary Guards' Quds Force," IDF spokesman Lt. Col. Jonathan Conricus said, adding that Israel's response will not be "limited geographically."

In recent weeks, a delegation of senior Egyptian intelligence officials have been visiting the Gaza Strip in an effort to mediate an arrangement between Hamas and Israel that would include an end to the recent hostilities.

According to Al-Hayat, as part of the negotiations, Israel has agreed to expand the fishing zone in the Gaza Strip, transfer fuel, increase the electricity supply, and allow the continued construction of UN infrastructure projects in the strip.

The Egyptians explained their aim is a deal in which Israel eases its restriction on the Gaza Strip in return for a cessation of the violent rioting on the border as part of the "March of Return" campaign, and not a truce or a general ceasefire agreement between Israel and Hamas.

The members of the Egyptian delegation, which met with Hamas leadership four times in two weeks, also held a meeting with representatives of the other Palestinian factions in the strip last week.

Egyptian intelligence officials told the Palestinian factions that their efforts had prevented a war in Gaza and suggested that they commit to the understandings with Israel. According to the report, the representatives of the other Palestinian factions agreed to the Egyptian proposal.

Meanwhile, a senior Palestinian official told the Associated Press on Friday that Oman’s Sultan Qaboos bin Said had offered to Prime Minister Benjamin Netanyahu during his visit to the country to play a role mediating between the Palestinians and Israelis, and that Palestinian President Mahmoud Abbas had said he welcomed any “meaningful” peace process.

US President Donald Trump's Middle East envoy Jason Greenblat welcomed Netanyahu's meeting with the Sultan and said that the meeting "is a helpful step for our peace efforts & essential to create an atmosphere of stability, security & prosperity between Israelis, Palestinians & their neighbors.”

“Looking forward to seeing more meetings like this!" he added.