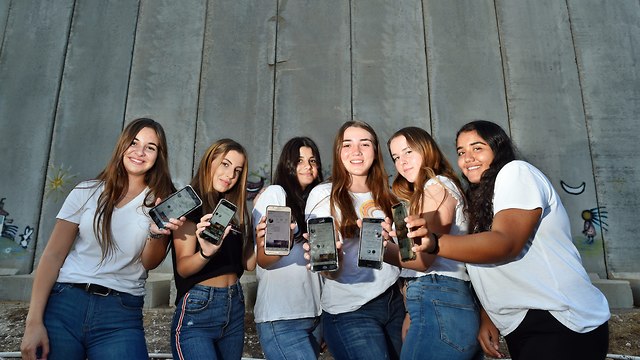 Eight teenage girls from communities adjacent to the strip launch a social media account documenting life in the area, which reached over 50,000 followers within a few days, hoping to show fellow Israelis and the rest of the world the difficulties of living amid Hamas terrorism.

An Instagram account started by eight 16-year-old girls who live in communities near the Gaza border, where they post images that show life under the threat of rockets and incendiary balloons, has become quite popular.

The social media page, called Otef Gaza, managed to get more than 50,000 followers within days of being launched.

The idea to open the page came up during a joint bus ride.

"We went on an ‘Israeli journey’ as part of a school trip," said Cohen. "During the bus ride, we started thinking about the situation and talked about it a lot. We felt very frustrated that no one in the country really cares.”

“If the same incendiary balloons were landing in Tel Aviv, things would have been different. We decided that this issue has to be brought up to the attention of the public, and most importantly, to the attention of the decision-makers. We talked to our tour guides on the bus and opened the page during the ride,” Cohen went on to say.

Fire in the Gaza border region

The photos the 11th graders are uploading to the account document the events that take place in border communities—including one of thick smoke billowing from burning tires during border riots, and fires started as a result of incendiary kites and balloons.

Each image is accompanied by a caption. For instance, under a picture showing a burning kite, there is a sentence saying: "It's no longer child’s play."

The Instagram account went viral soon afterwards. "We were completely shocked," Cohen said, adding that “within hours, we were flooded with countless inquiries and pictures. We could not believe we had reached so many followers. Within the first three days, we had more than 30,000 followers."

Due to the account’s popularity, the girls are now receiving countless photos in real time from all around the border region, which they upload right away.

"People, it turns out, do not even know what life is like in the Gaza border communities," Cohen said. "It’s unacceptable that we have to lock ourselves in our houses because of tire smoke from Gaza riots, and no one in Israel is aware of it.”

“We live in a warzone, and it does not interest anyone in Israel. We see it in the comments. People write to us, asking: ‘How do you live there?’ Our goal is to reach the decision-makers … so they would put an end to it,” the 16-year-old stressed.

She said she hopes their Instagram page will reach people from all around the world so that “the story of the Gaza border communities will be told.”