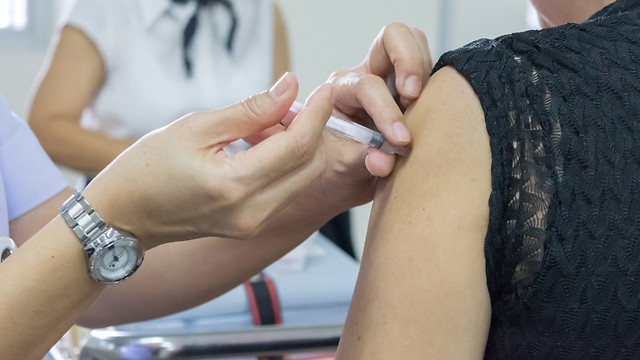 The death of a 1.5-year old toddler from measles brought public debate about vaccines to a boil; hundreds of children have already caught the disease; parents WhatsApp groups are buzzing and everyone is waiting for the government to decide: will parents be required to vaccinate their children?

Parents of kindergarten children blame parents who do not vaccinate their children for the spreading measles epidemic, often using offensive language. Many wonder how to stop non-vaccinated children from attending schools, and debate whether to go on strike and stop kindergarten studies altogether.

Last Thursday a 1.5 year-old toddler died of Measles in Jerusalem. Over 1,200 patients were diagnosed with the disease over the last eight months—600 of which in the past month. Around half of the patients are children under the age of four. Following these developments, the Knesset is working on a vaccine bill that will compel parents to vaccinate their children.

Roni Golani, the 1.5 year-old daughter of Ezer and Doris from Rishon LeZion, caught Measles six months ago—a week before her scheduled vaccination. “We had a very difficult two weeks, with a fever that wouldn’t go down, a rash all over her body, headaches and ear pain,” the parents said.

“Roni couldn’t eat, drink or sleep, she was hospitalized in isolation and her birthday party was cancelled. The scariest part was fear of possible complications. This epidemic would not have started if it weren’t for parents who refuse to vaccinate their children. We are asking the government and the health ministry to pass this law," she stressed.

A vaccination bill has already been initiated by MK Yoel Hasson (Zionist Union) and MK Shuli Mualem-Rafaeli (Bayit Yehudi). This is the first time that the Knesset is set to discuss a national strategy for dealing with the problem. The bill includes keeping track of non-vaccinated children through health ministry registries, sending parents notices, and finally inviting parents to an educational meeting, after which they will have to sign a waiver if they still refuse to vaccinate their children, and could receive tax sanctions or have their children removed of educational institutions in case of an outbreak.

“I can’t understand parents who are precarious about their children’s health and don’t vaccinate them in the year 2018,” said Michal, a mother of two. She is part of a mothers group that has decided not to send their children to school on September 1st, and went on strike so that the anti-vaccine issue will be addressed.

Roni Golani, the 1.5 year-old daughter of Ezer and Doris from Rishon LeZion, caught the Measles six months ago—a week before her scheduled vaccination

“We do hear of the occasional kindergarten teacher who decides not to allow enrollment unless parents present a vaccination registry. But that’s not the way it should be,” Michal said. “Behind every child there’s a story, and I think it’s horrible that we boycott children when they did nothing wrong—it's the parents who make choices that endanger their child's health and safety… choices that come with a social price.”

In recent years, refusing to vaccinate children has become a trend. Parents have many explanations: vaccinations cause autism, development problems and the diseases themselves, like Measles for example.

The trend is more popular in the center of Israel, especially in anthroposophical kindergartens, where up to a quarter of children are not vaccinated. It is also a trend in the ultra-Orthodox community. The toddler that passed away on Thursday was born to a Neturei Karta family, an anti-Zionist group of extreme orthodox Jews in Jerusalem.

Experts explain that once even a few percentages of the population are not vaccinated for Measles, an outbreak can occur which also jeopardizes vaccinated children.

“I caused a general parents mutiny,” said Hani, a mother of a 2.5-year-old. “Once I realized that there is a non-vaccinated child attending the kindergarten, I made a huge mess for the teacher. I caused quite a stir in the parents' WhatsApp group. The teacher had no choice but to remove the non-vaccinated child from the class. Thank heavens that it’s a private institution, so she had no legal problem to do so," she added.

“The child’s mother tried to fight back, she said she will have to quit her job on my account, but with all due respect—you don’t mess with the children’s health. I heard that the child later found an anthroposophical kindergarten, where no one asks questions. That’s crazy, next year my son is going to attend a state kindergarten, where anyone can decide whatever they think fit and not vaccinate their child, and there’s no way to fight it. We absolutely need a law against this, what are they waiting for? more children to die?" Hani continued exclaimed.

"Parents who don’t vaccinate their kids are actually counting on the vaccinated children immunity system,” said Sarit, a teacher aid in a kindergarten in the center region. “Thank god, in our kindergarten most children are vaccinated. There is also a growing awareness among parents now about the Flu vaccine. Parents who don’t vaccinate are not only exposing the other children to diseases, but also the staff," she added.

Sarit went on to criticize the pouring outrage of some parents, who shift the blame towards non-vaccinated children and their parents.

“This isn’t the way to handle anti-vaccine parents, even though a non-vaccinated child does expose me and my children to disease. The health and education ministries are the ones that should act. Not the parents, and not on a designated WhatsApp group against this or that child—today it’s the non-vaccinated children and tomorrow it’s whoever has lice," she continued.

Up until the 60’s it was clear that everyone is going to get Measles. Parents even organized “infection parties”, because it was believed it is better to get the disease as a child.

“Once, Measles was a given,” said Dr. Erez Garty, of the Davidson Institute of Science Education. “Mortality stood on 1:500-1:1000, depending on the healthcare system in a respective country. It’s a mean disease, complications can be serious, one of which might only appear seven years after the infection. An infected person can also get SSPE syndrome that causes degeneration of the brain and nerve system," he explained.

Measles could have already been eradicated, say experts, if not for recent year's anti-vaccine trend. According to Dr. Garty, in the 60’s, when Measles vaccine came out, infection percentages dropped dramatically.

“It cleaned out hospitals. The vaccine also protects those who cannot be vaccinated, like children under one, cancer patients and others,” said Garty. “The vaccine is not only a personal but also a social defense mechanism. When you vaccinate your children you are also taking care of the newborn who has not yet been vaccinated, and the 80-year-old grandmother. In the west Measles was almost eradicated, but has returned due to anti-vaccine parents. In Europe 41,000 have been infected, it’s like a raging fire,” he bemoaned.

“Right now, Measles is far from being eradicated,” said Prof. Itzik Levy of the Schneider Children's Medical Center Infectious Diseases Unit. “It’s a viral and highly contagious disease and it's airborne—one of the only diseases that one can catch from simply being in the same room with an infected person”.

“The first signs of Measles are fever, cough and an eye infection, followed by a rash four days later that travels from the upper to the lower body. This stage lasts five days, after which the patient enters the recovery stage. Possible complications include pneumonia, meningitis, brain encephalitis and ear infections,” added Prof. Levy.

From the early 70’s onwards, one-year-olds babies in Israel receive a vaccine and a booster at the age of six. “The vaccine is called MMRV, and contains a weakened live virus, along with vaccines for Mumps, Rubella and Chickenpox,” said Prof. Levy. “It’s highly effective—over 95%—and also highly safe. Side Effects can include a light swelling in the injection area and sometimes fever in the next week, but nothing else," he continued.

In recent years, the number of parents who choose not to vaccinate their children is growing. “They each have their reasons. There’s an ultra-Orthodox population who doesn’t vaccinate on principal, and other populations who oppose the vaccine since they fear it isn't safe. There’s a rumor running around that the vaccine can cause autism, even though it has been tested on thousands of children and no link has been proven. In these populations we see outbreaks," Prof. Levy concluded.

“It’s not only a case or two in the ultra-Orthodox Neturei Karta neighborhood,” said Galit, a mother of three from the Sharon area. “We received a phone call from our general physician to come and get examined, along with everyone that was on a Turkish Airline flight to Israel. Apparently there was a sick person on board who exposed us all to the disease”.

“It resonated with me since I was also wondering whether to vaccinate my eighth-grader for the Papillomavirus,” continued Galit. “It was the talk of town among friends and on parents WhatsApp groups, but once I got that scary phone call about being exposed to Measles on the flight—my doubts were gone. I signed the form and told my daughter she is getting the vaccine, and there’s no question about it.”