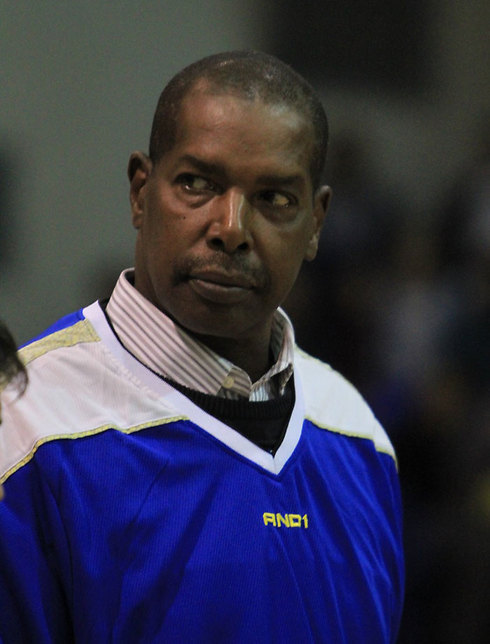 Latest data shows there are 120,000 addicts in Israel today with drugs, alcohol, gambling, sex and online shopping being the most popular vice choices. While the overwhelming majority of the addicts are men, there has been a sharp increase in the number of women becoming addicted to harmful substances and behaviors.

"You all know me as Aulcie Perry, a former basketball player for Maccabi Tel Aviv, but not many people know me by my Jewish name—Elisha Ben Avraham, and today I’d like to talk to you as Elisha," Aulcie Perry says at the beginning of his lectures, which he gives throughout the country, describing his life story, a large part of which he spent as a drug addict.

"Everything was well until 1983—my seventh year at Maccabi. I started to feel pain in my knees, terrible pain, my knees were full of fluid, and before every game the doctor would stab me with a needle, suck the fluid out and give me cortisone and painkillers. At the time, retiring from basketball wasn’t an option,” Perry recalled.

Perry had undergone the same procedure ahead of every single game, until one day, after asking his doctor for the usual painkiller for the umpteenth time, the doctor refused.

"The pain became more acute, and I started looking for replacements on the black market," said Perry, adding that after a certain period of time, even the black market painkillers stopped being effective, which made him switch to hard drugs and become addicted.

“I could not function without drugs, no one at Maccabi Tel Aviv knew about that, they felt that something was wrong but they couldn’t pinpoint what," he recalled. "The situation got worse when I missed the game against Real Madrid. I was sick, and under the influence of drugs. People from Maccabi were looking for me like crazy, but couldn’t find me. I realized that I was in big trouble and even made an appointment with a psychiatrist, but I canceled it at the last minute because I was embarrassed."

Perry, who wore the legendary number 8, was arrested in Holland in 1985 along with his cousin, Kenneth Johnson, with a 3.5 pounds (1.6 kg) package of 89-percent pure heroine.

He was extradited to the United States after nine months of fighting extradition, and went on to serve five years in federal prison. Maccabi Tel Aviv maintained contact with him during all those years, and after completing his sentence, he was offered an opportunity to return to Israel and start a new life.

During his lectures, Perry talks about the difficulties of growing up in Newark, New Jersey amid violent racism, becoming free through basketball, his addiction to drugs and the hard road to sobriety.

"From the moment I started to get in trouble due to drugs, I tried to get clean," Perry explained. "I started to think about what happened to me and how it happened. It was the most difficult period of my life. I went through detox. I created a lecture about my life, my family and about how I became the person I am right now. Today, I work mostly with children in order to pass on my message.”

The problem is only getting worse

Data provided by the Ministry of Social Affairs and Social Services indicates that there are around 120,000 people in Israel today who are addicted to drugs, alcohol, gambling, sex and online shopping—with only one out of every six addicts seeking treatment.

The figures also show that in 2017, the number of teenage girls and young women (aged 20-25) who sought treatment for addiction through the Ministry of Social Affairs has increased by 28 percent—from 1,290 in 2016 to 1,660 in 2017. The number of women who received treatment for addiction in general has increased by about 16%—from 2,683 to 3,107. However, women are still less likely than men to become addicts, representing only 21% of addicts. The number of young people (men and women) in the 18-25 age group has also increased and currently stands at 19%. Another statistic shows that 75% out of the 15,000 adult patients who are addicted to drugs, alcohol, gambling, shopping and sex are not married.

"The National Service for Treatment of Addiction works to identify teenagers, young people and adults who are addicted and bring them in for treatment," said Aharon Shabi, the director of the Service. "We assist patients with exercising their rights, occupational rehabilitation, overcoming trauma, changing behavioral patterns, and mobilizing their families to help in the process. Our teams think outside the box in order to create the most innovative treatment programs, and accompany the addicts into a new way of life.”

The data also indicates a 35% increase in the number of addicts who were treated for sexual or physical abuse. An analysis of the distribution of addictions to psychoactive substances among the ministry's patients reveal that 32% of all patients are addicted to alcohol, 32% to cannabis—to the point where their ability to function in everyday life is impaired—14% are addicted to opioids such as heroin and morphine, 6% addicted to cocaine, and 2% to various prescription drugs.

An analysis of the distribution of behavioral addictions indicates that 9% of all patients are addicted to gambling, 3% to sex, 1% to gaming, and another 1% to online shopping. Some patients with behavioral addiction struggle with dependency on psychoactive substances as well.

Anat (a pseudonym), 36, was born to parents who were drug addicts.

"I saw drugs at home. When I was six, they sent me to a boarding school, but everytime I came home I saw drugs. At the boarding school, I couldn’t really study because I had to take care of my little brother. My childhood was lost. My parents went in and out of jail. When I was 12 years old, I tried drugs for the first time—it was LSD,” Anat said.

"Then I started using cannabis, and it got worse and worse because nothing could stop my pain. I could not cope with my life, and at the age of 15 I became addicted to hard drugs—cocaine and heroin. At night, I would roam the streets with my girlfriends and older men, who were criminals. We would hang around schools, parks, shelters, and do drugs. Sometimes I would stay up all night for several nights in a row because these men wouldn’t just give me the drugs for free—they were exploiting me sexually ... I experienced violence and rape, which deteriorated into prostitution,” she recalled.

NIS 40 million of cocaine that made its way from Peru to Israel. (Photo: Police Spokesperson)

At the age of 27, Anat became pregnant for the first time, and after almost dying from an overdose, she was hospitalized and her life was saved. "When I recovered from intensive care, they sent me to a psychiatrist and recommended a methadone treatment," she said. "After I gave birth to my elder daughter, I stopped with the methadone and stayed clean for nine years … All those years I was dealing with self-hatred—I could not bear to see my face in the mirror. I did not want my child to go through my experiences.”

“After I gave birth to my second child, I relapsed. Social Services offered me an opportunity to enter a drug rehabilitation program. They told me: 'You are a good mother, but you have to take care of yourself.' There, I discovered who I was and opened up about all the experiences I did not have the courage to tell anyone about before. I stopped feeling ashamed," Anat continued.

Anat moved to a hostel after she completed her treatment. “They gave me my children back. Today, I work as a counselor, and I have been clean for three years … When I was a child, my parents never hugged me or played with me. Only during the rehabilitation program, I managed to learn how to embrace myself and others.”

Dima (a pseudonym) became addicted to drugs, sex and food. His drug addiction began at the age of 17, and lasted for 20 years. "I lived a double life, I was married and worked, but on the inside I felt like dying," he said. "I used all kinds of drugs: ecstasy, cocaine, crack, cathinone. I tried heroin but didn't like it. I loved crystal meth most of all. I thought I'd be addicted until the day I died."

“From a very young age, I realized that I didn’t want to live, and the drugs filled an empty space in my soul and gave a sense of euphoria. A few years ago, I realized that I was in trouble. I tried to get clean through psychiatrists and psychologists—and it only got worse. I was stuck in the same spot. Eventually, I was given an opportunity to enter a rehab program. On my way there, I thought: ‘This is it, I'll try it for the last time, if it doesn’t work, I’ll just keep using drugs until I die,'” Dima explained.

After completing the treatment, Dima was offered to become a counselor in the treatment program, and today he helps other drug addicts. "I'm happy that they managed to get treatment … Many die on the streets, and others enter the prison system. Here, we try to help them with all our knowledge to get through the rehabilitation process and recover.”