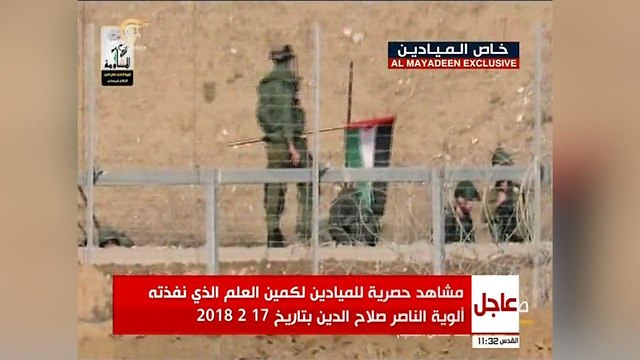 In first, Popular Resistance Committees' military wing releases footage of attack in which 4 IDF soldiers were wounded near the southern Gaza border in February, when an explosive device went off near an army patrol.

The Popular Resistance Committees' military wing released Tuesday footage of the a February attack on an IDF patrol on the southern Gaza border, in which four soldiers were wounded.

An officer and a soldier from the combat engineering unit Yahalom were severely wounded, a company commander from Golani's 13th Battalion was lightly wounded, and a Golani command post soldier was moderately wounded when an explosive device went off near an IDF patrol near Kibbutz Ein HaShlosha.

The explosive device was affixed to a Palestinian flag, which was placed near the fence under the cover of demonstrations on the border.

Golani and combat engineering forces were inspecting several suspicions objects along the border fence when the explosive went off.

An initial inquiry into the incident found that trackers scoured the area before combat engineering soldiers approached the flag under cover of the Golani soldiers.