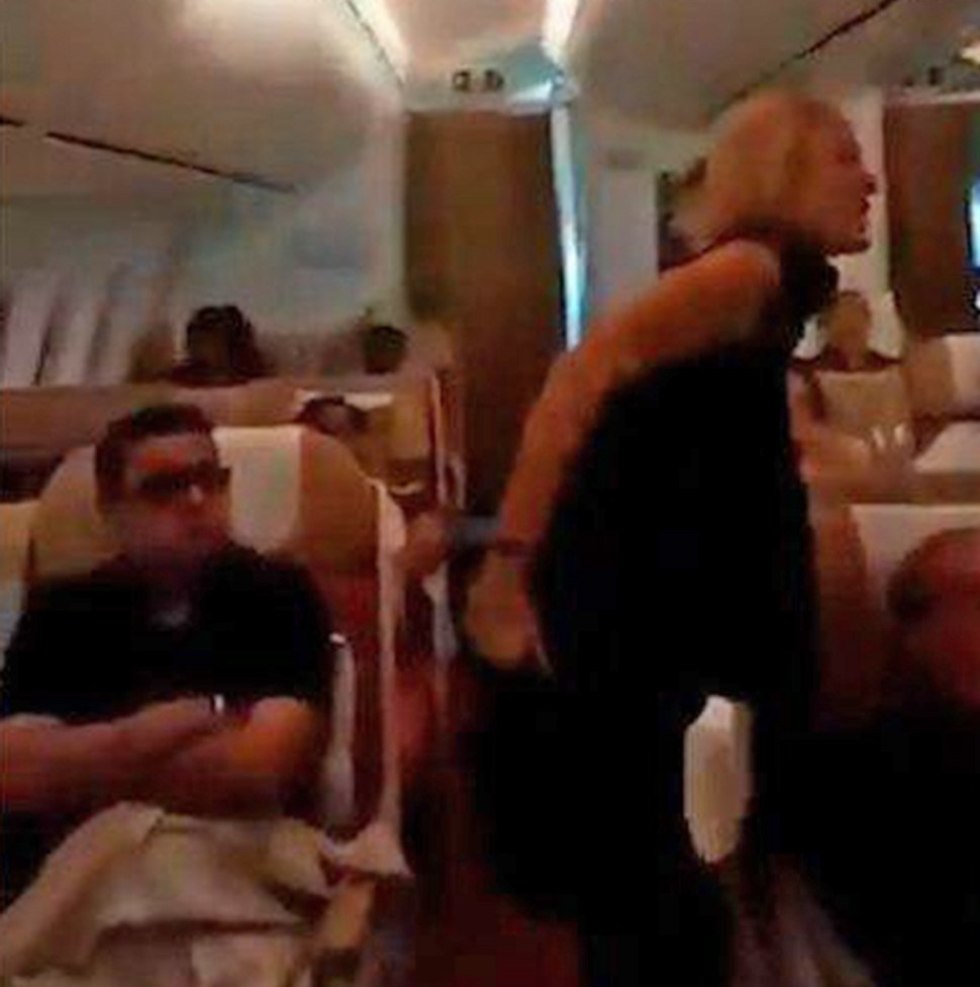 Simone O'Broin, promoter of BDS movement against Israel in the UK, is taken into custody after she was caught on video in an inebriated state terrorizing passengers and racially abusing aircrew who refused to continue serving her alcohol; 'Indian f***ing money grubbing bastard,' she shouted in the viral video.

Simone O'Broin, a well-known international human rights lawyer and a prominent activist in the boycott movement against Israel in the UK, was caught on camera while inebriated, threatening to boycott the airline if the aircrew doesn’t provide her with more wine.

"I am the leader of the f***ing boycott movement," O'Broin shouted, referring to her anti-Israel activities. "If I say boycott f***ing Air India, done. Do you understand me? You can’t give me a wee bottle of wine?” she vented while gesturing aggressively.

In the video, filmed by one of the passengers of an Air India flight from Mumbai, India to Heathrow, London last Saturday, the activist was seen cursing air hostesses and yelling racial slurs.

The video quickly became viral once it was uploaded to the internet. Passengers testified that after the aircrew refused to provide O’Broin with more drinks—due to being deemed too drunk—she stole a bottle of alcohol from the service area of the plane. It was reported that she was also prohibited from smoking during the flight.

In one of the videos, O'Broin is seen terrorizing the passengers of business class, shouting, "I work for all you f***ing people. … ‘The f***ing Rohingyas, the f***ing people of all Asia, for you, I’m an international criminal lawyer. Don’t get any money for it by the way. But you won’t give me a f***ing glass of wine, is that correct?”

According to witnesses, O’Broin’s tirade went on for nearly five hours, during which she referred to herself as “the Palestinian lawyer.”

The 50 year old previously worked for the anti-Israel Badil group and co-authored a paper with UN Special Rapporteur for human rights Richard Falk—who in the past accused Israel of genocide.

“She was scary and out of control. It was exhausting. We were too frightened to sleep, at one point I was worried about the plane crashing it got so out of hand. My wife and I were so terrified that we held hands and my wife told me not to look at her,” recalled an eyewitness quoted by the British Daily Mail.

O'Brien, who was born in Belfast, was returning from her two-month vacation in Goa. She had been taken into police custody upon her arrival in the UK.

“She was arrested on suspicion of racially aggravated public order, common assault and drunk and disorderly conduct and taken to a west London police station. She was subsequently released and remains under investigation,” stressed London Metropolitan Police in an official statement.