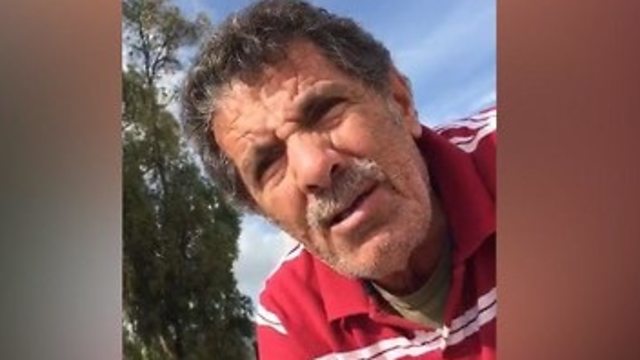 A video from 2016 shows 2 police officers humiliating Nayef Yabin Yassin, a resident of the northern city of Arraba; 'The vehicle's wheels are square instead of round,' Yassin was told after protesting his detention.

A video from 2016, in which police officers are seen humiliating Arraba resident Nayef Yabin Yassin was released on Monday.

Yassin was detained on suspicion of committing a traffic violation. After protesting his detention, the policemen told the Arraba resident they intend to give him a NIS 200 ticket and remove his vehicle off the road, claiming "the vehicle's wheels are square instead of round."

The policemen are suspected of mocking Yassin. They repeatedly told him that the wheels of his vehicle are square, adding, "All the wheels should turn together, which they don't. How did you get your driver's license?"

Yassin's son, Mustafa, filed a complaint with the Police Internal Investigations Department. "The officers' behavior is a disgrace to the police. The most embarrassing thing is that they incriminated themselves in the video," he said.

"Today it's my father, tomorrow it can be any other old man," he lamented.

Attorney Ori Narov, who represents Yassin, said, "It is impossible not to be shocked by the video in which police officers are seen bullying an Arab driver, humiliating and degrading him, while exploiting Yassin's lack of Hebrew proficiency for their apparent personal amusement."

"Astonishingly, it appears the police officers documented their own offensive and inappropriate conduct," Narov went on to say.

"The entire incident reeks of racist police conduct," he concluded.

The Racism Crisis Center called on the police to immediately launch an inquiry into the incident, and bring the officers involved to justice.

"The police should make maximum effort to prevent the reoccurrence of the kind of offensive, humiliating, and racist behavior that is seen in the video to strengthen the public's trust in the law enforcement system," the Racism Crisis Center added.

"(We witnessed) a despicable and contemptible behavior. The police officers filmed and distributed their shameful conduct, and they should be kicked out of the police as soon as possible," Tibi opined.

The police issued a statement, saying, "An inquiry launched into the incident shows that the video was filmed during a law enforcement activity in 2016, during which the driver was caught while driving with severe vehicle malfunctions. Therefore, the vehicle was taken off the road and the driver was fined.

"Nevertheless, the conduct of one of the police officers involved in the incident, is unacceptable and does not correspond with the values and norms expected of a public servant," the statement read.

"Even though over two years have passed since the incident, a disciplinary proceeding has been launched into the matter.

"We would like to stress that this unusual behavior does not represent all police officers, who carry out law enforcement activities on a daily basis, giving service to millions of civilians—Jews and Arabs—in a dedicated, professional manner and with mutual respect for each and every person," the statement added.