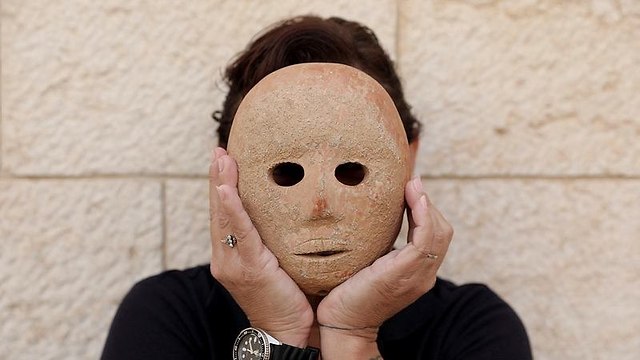 Mask from the dawn of religion recovered

Archaeologists recover a rare 9,000-year-old Neolithic mask from antique robbers in the West Bank; the mask originates from the time of the transition from hunting and gathering to agriculture, and exhibits early testimonies of what later became organized religions.

Officials from the IAA’s Theft Prevention Unit said they received information about the mask in the beginning of 2018 and were able to trace its origins back to the Pnei Hever region of the southern Hebron Hills in the West Bank.

“We received a tip that there was this item on the antiquities market; we began searching for it and found those involved,” Amir Ganor, head of the IAA Antiquities Theft Prevention Unit, revealed to The Media Line.

The Neolithic mask (Photo: EPA)
“We interrogated the individuals in question,” he added, declining to specify the number of persons involved in the theft.

“The find is significant because we know the archaeological context and this is something that is of the utmost importance in our research,” Ronit Lupu, of the IAA Antiquities Theft Prevention Unit, told The Media Line. “All of these stone masks are connected to the same area: the Judean Mountains, the Judean Desert and thereabouts.”

There are presently 15 Neolithic stone masks across the globe known to researchers, of which only three come from clear archaeological contexts, including this one. The rest were already removed from sites when they were found in antiquities markets, leading to the loss of invaluable information for archaeologists as they were not unearthed in proper excavations.

Researchers from the IAA and the Geological Survey of Israel are currently attempting to understand possible uses of the mask, after which it will be displayed in a yet-to-be-decided museum.

“In Neolithic sites we’ve identified a lot of objects that are related to ritual activity, therefore we believe that such objects—like this mask—are actually functional,” Dr. Omry Barzilai, head of the IAA Archaeological Research Department, explained to The Media Line, referring to the population associated with the mask as the Pre-Pottery Neolithic B people.

This period, dated to about 6000-7500 BCE, exhibits a boom of evidence for ritual activities, among which plastered human skulls found under floor surfaces in various locations in the Jordan Rift Valley, probably related to some kind of ancestor worship or veneration.

A plastered Skull from the Neolithic site of Beisamun, in the Hula Valley. (Photo: Wikimedia Commons)

“These masks were brought in as some sort of medium or focus that would relate to all the members of a village and this is how early religions were formed,” Barzilai explained.

Stressing the rarity of the discovery, Dr. Barzilai explained that it is connected to a turning point in mankind’s history, which saw humans shift away from hunting and gathering to agriculture-based economies.

The Levant, the cradle of agriculture, was at the time the setting for major processes that define the world as we know it today. This includes the transition from an earlier nomadic lifestyle to permanent settlements, the domestication of farm animals and plants and the gradual abandonment of hunting and gathering for agriculture and animal husbandry.

The important find originated in what is now known as the West Bank, which is generally outside the IAA’s purview as it restricts its excavation activities to areas inside the Green Line.

“Usually the IAA doesn’t operate in the West Bank so this is a unique event because it was related to the illicit trafficking of antiquities,” Dr. Barzilai continued. “As soon as we’re talking about illegal antiquities trading, the Theft Prevention Unit gets involved to prevent it. If we hadn’t, this mask would likely have ended up on the black market.”

Antiquities robbery is a widespread phenomenon in Israel, with many ancient artifacts winding up on the black market abroad.

“Antiquities robbery in Israel is something we in our unit combat regularly,” Ganor told The Media Line. “Each week, we apprehend people suspected of looting, selling or other antiquities-related offenses. Unfortunately, it’s so widespread that on a yearly basis we catch about 200 suspects.”