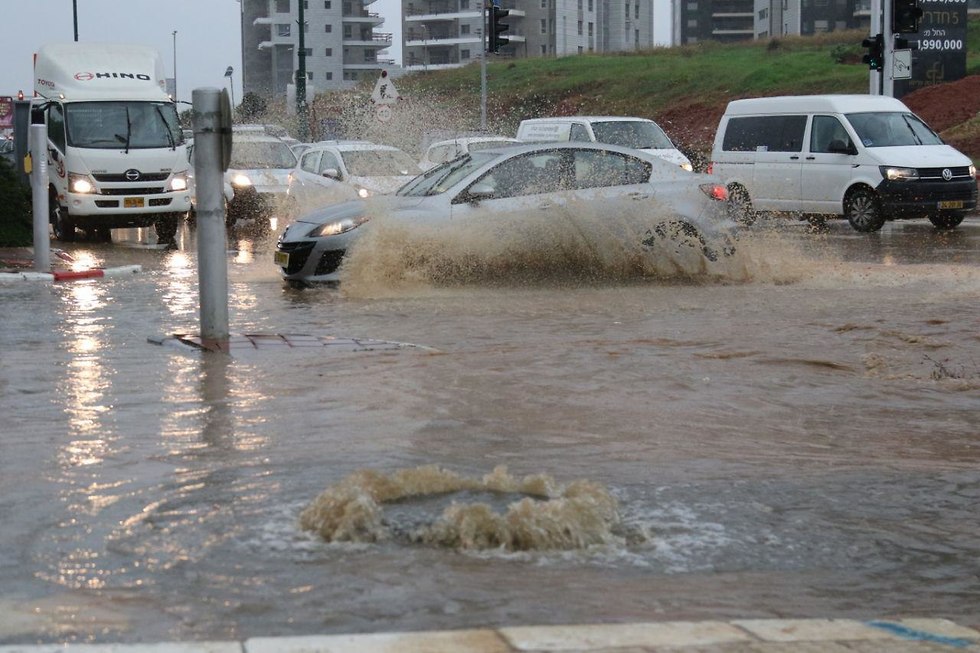 The first big winter storm of the year hits Israel, with streets flooding in Tel Aviv, Rehovot and Yavne among others; Hadera Stream sees most rain, with 20 mm in one hour and a total of 40 mm by 8am.

A winter storm that hit Israel on Thursday caused flooding in different areas of the country. Fifty children and their teachers were safely rescued from three kindergartens in Rehovot.

In Tel Aviv, massive puddles formed on the busy Allenby Street and in nearby street, while traffic congestion blocked the Azrielly Junction after the stop lights stopped working. Roads were also flooded in Rishon LeZion, where the municipality drained water in the eastern part of the city. Two streets were flooded in the Yavne industrial area.

Flooding at the kindergarten in Rehovot (Photo: Hatzalah Union)

So far, the Hadera Stream area saw the most rainfall, with 20 mm falling in one hour and a total of 40 by 8am Thursday. Zikhron Ya'akov also registered a lot of rain, with 28 mm, while Bat Yam experienced 23 mm, Acre 18 mm and Netanya and Haifa 17 mm each. Raanana reported 15 mm of rain, while Rishon LeZion saw 14 mm.

Meteo-Tech meteorologist Tzachi Waxman said the worst of the storm is still ahead, with the coastal area and the north expect to get the brunt of the rainfall.

"This is the most serious storm since the beginning of the season, which officially marks the beginning of winter," he said. "Snow began falling at the top of Mount Hermon this morning. I estimate that by tomorrow morning, it'll cover the top part of the ski site."