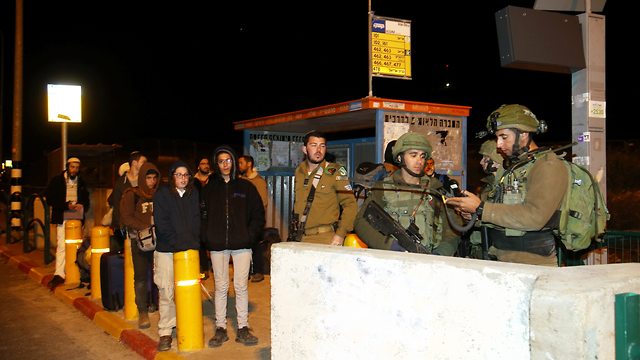 A popular way of getting about is now a top target for attacks, sowing fear in the hearts of Israelis in West Bank. The method is bold and effective: A car pulls up, a terrorist gets out, opens fire at short range, and flees.

It's Saturday night, after the end of Shabbat, and the hitchhiking stops in the West Bank are crowded as ever. But the echoes of the past week—a difficult, bloody week that claimed the lives of two IDF soldiers and a baby who was prematurely delivered after his mother was shot—can be clearly seen at every stop. The tensions are high; the fear of more terror attacks is growing. But the faith and the desire to stick to routine are stronger—at least among those looking for a ride.

The hitchhiking and bus stops have become fortifications in their own rights. Armed soldiers secure them, and some stops also have concrete blocks the height of the stop's bench that no man is allowed to cross. "You're not moving from here," a soldier securing the hitchhiking stop in Givat Asaf tells Asher Borochov, a 23-year-old student from Ariel who is waiting for a ride. "You're not allowed onto the road and past the concrete block. You can get past it only when there's a car stopping for you."

The soldier serves in the ultra-Orthodox battalion Netzah Yehuda, which lost two of its soldiers—Sgt. Yosef Cohen and Staff Sgt. Yovel Moryosef—in a shooting attack on Thursday at the very spot.

"The rules of the game are changing in front of our very eyes," the soldier says. "Our friends have fallen. We're here, and we are not deterred."

Sgt. Yosef Cohen, left, and Staff Sgt. Yovel Moryosef were killed in a shooting at a West Bank hitchhiking stop

Borochov, meanwhile, only wants to get to where he's going. "There's talk of the danger in hitching a ride here, but I trust myself: Both because I'm armed, and because fears talks to everyone differently. I won't be deterred. This is the way, and I will take it. I'm sure two months of calm will bring people back to the hitchhiking stops," he says.

The hitchhiking stations, which also include bus stops, are a significant spot in the West Bank settlements. It's not just the unusual form of transportation, which is a lot less common in Israel proper, but the atmosphere at them. The travelers know one another, speak to each other and exchange phone numbers. Each stop has its own memories, sadly including difficult memories from attacks that took place there.

IDF soldiers securing hitchhiking stop in the West Bank
Over the past week, those hitchhiking stops have been the main target for attacks in the West Bank. The modus operandi was bold: a car pulls up, a gunman gets out, opens fire at short range, and then escapes. This method has been sowing fear in the hearts of the residents. "There's no doubt there is concern, it's everyone, and my parents asked me to avoid it (hitchhiking), but we can't do without it," explains Aminadav Sharabi, 22, a Beit El resident waiting for a ride at the Ofra Junction, where a deadly terror attack took place a week ago. "After all, car accidents claim more lives. It's true that today the situation is tense, but those who live here understand there is no other way."

IDF soldiers securing hitchhiking stop in the West Bank (Photo: Yariv Katz)
But not all think like Sharabi. The hitchhiking stops are less crowded than normal. The soldiers stationed there point their weapons towards the road, a bullet in barrel, entirely alert. As we take a tour between the different hitchhiking stops, we also come across residents who arrived there especially to bring the soldiers hot tea and a plate of cookies, to help them face the biting cold. They drink it only under security, with other soldiers covering them.

IDF soldiers securing hitchhiking stop in the West Bank
At the Tapuach Junction, the familiar Hilltop Youth from the area are waiting alongside an elderly couple from Jerusalem who, despite the tensions, spent their weekend at Tapuach. "There is fear, and it exists everywhere here, but there is also a lot of love and children and grandchildren we want to see, and they live in Tapuach, so we're here," one of them explains. There is also a couple of ultra-Orthodox who belong to the Chabad Movement, who spent their Shabbat in the settlement of Yitzhar, and were now making their way to Haifa.

IDF soldiers securing hitchhiking stop in the West Bank
"We have no fear," says Amuna Levi. "We trust G-d and wholly believe that the Land of Israel belongs to the people of Israel. We go anywhere we want in the country." Her husband, Shahar, adds: "In such a time, we need to bolster out faith and believe that G-d willing this period (of violence) will pass."

It's quieter at the Ariel Junction, but definitely still tense. "I know and hear about everything that happens, but I need to travel and this is the way to do so, and I won't change it," says Or Mintz, 23, who is making her way from Ariel to Dolev.