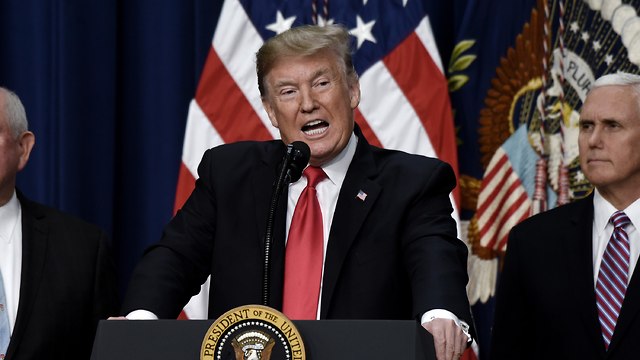 Op-ed: As the American Stock Exchange continues to plummet, there is no longer any doubt—the American president is bad, even terrible, for the US economy.

The American Stock Exchange is in panic as stocks fall to new lows. Since August: the Dow Jones 500 Index has plummeted 18%, the Dow Jones Industrial Average has dropped 16%, the Nasdaq is down 22%; and shares in FAANG (Facebook, Apple, Amazon, Netflix and Google) stocks have lost $1.2 trillion.

The past two weeks have been particularly difficult. "Fear has taken over the market," investment managers say in a choked voices.

Analysts and expert market commentators are quick to offer reasonable explanations. "Technology stocks were too inflated and so the correction was inevitable," they say. "Markets decline as expected following a rise in interest rates," they add. "Sales and revenue estimates are modest because growth is at its peak," they further explain.

US President Donald Trump (Photo: TNS)
These explanations and their ilk are only partly true. All of these assessments lack one basic common element. That element is Donald Trump, or, to be exact, the crisis of the American presidency that is US President Donald Trump. With Trump's inauguration in January 2017, many financial experts—myself included—prepared to be horrified. He was chosen as the leader of a global superpower, a man who came out of nowhere, a businessman whose reputation as a serial bankrupt preceded him; devoid of political experience, with bogus views and opinions on most issues. We were overwhelmed with fear and trepidation.

To our surprise, the stock market erupted into joy. After Trump managed to pass Congressional amendments to tax laws, big companies benefitted and stock prices surged. Trump's decision to increase US budget spending also caused a sense of well-being.

But it was all a house of cards and it has finally collapsed.

Tax benefits are over, the deepening federal deficit has led to a dangerous increase in public debt, and the excessive increase to military budgets came at the expense of essential investments in civilian infrastructure. The disputes over trade were expressed in an increase in prices (the rate of American inflation is double that of Israel), and the deliberate damage to Obama's two statutes— Obamacare and the Dodd–Frank Wall Street Reform and Consumer Protection Act—undermine the personal and financial security of the American people.

Former US President Barack Obama (Photo: AFP)
In the last few days, Trump even dragged the American public into a crisis over his intractable demand to construct the wall on the Mexican border.

Trump's worst impulses are only getting worse. He's not going to stop; he has fallen in love with the chaos. And this chaotic man has lost his level-headed cabinet members, published a series of strange decrees—the purpose of which no one understands— and, regardless of party affiliations, became a heavy burden on US democratic institutions.

For the past few days, according to a Wall Street Journal report, the American president has been consulting with his advisors on how to fire Federal Reserve Chairman Jerome Powell, who has been raising interest rates, something Trump bitterly opposes. Trump accused Powell of the two successive central bank rate hikes that caused stock prices to drop.

(Photo: EPA)
Unrealistic thoughts of ousting the president are terrorizing markets and add fuel to Trump's careless economic performance. The American president, of course, is looking for culprits. Even if the latest rise in Federal Reserve's interest rate was unnecessary, and it was unnecessary, it is not responsible for the stock market crash.

Trump is to blame. As long as he sits in the White House and serves as president, the stock market crisis will not only continue but turn into a severe economic crisis that reflects the presidential crisis.

In the end, experts were right when they said a couple of years ago that Trump is dangerous to America in general, and to American economy in particular.