Israel going to the polls: Early Knesset elections to be held April 9

Israel is returning to the polls: The heads of the factions in the coalition decided at a special meeting held Monday afternoon that general elections will take place on April 9, 2019. The Knesset will likely be dissolved on Wednesday.

"Out of national and budgetary responsibility, the leaders of the coalition parties unanimously decided to dissolve the Knesset and go to new elections in early April after a four-year term," the five coalition party leaders said in a statement. The next elections were scheduled to take place in November 2019. 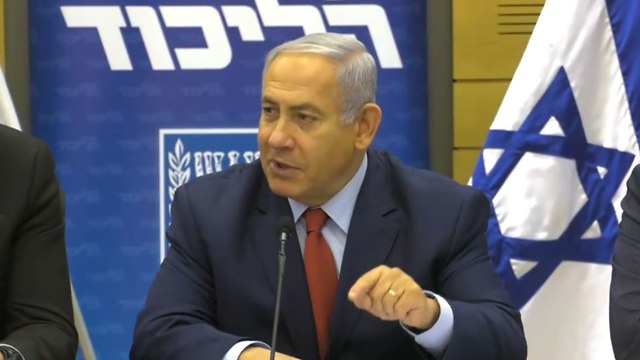 Benjamin Netanyahu at a meeting of his Likud faction, December 24, 2018

Education Minister Naftali Bennett, chairman of the Jewish Home party, was not present at the meeting, but joined the other coalition party leaders in supporting April elections.

The decision to go to the polls was apparently made after it became clear that the 61-member coalition, with its one-seat majority, would not be able to pass legislation on the draft of ultra-Orthodox into the army, which had a January 15 deadline. Earlier in the day, opposition parties Yesh Atid and Yisrael Beiteinu made it clear that they did not intend to support the law. Yesh Atid leader Yair Lapid called the coalition's hoped-for compromise a payoff to draft dodgers.

Ultra-Orthodox parties consider conscription a taboo, fearing that military service will lead to immersion in secularism. But years of exemptions have generated widespread resentment among the rest of Jewish Israelis, who have to serve two or three years in the military.

Prime Minister Benjamin Netanyahu welcomed the decision to hold April elections, at a faction meeting of his Likud party on Monday afternoon.

"It's perfectly reasonable to go to elections now," said a smiling Netanyahu, pointing out that elections would not have been appropriate a few weeks ago, when Israel was embarking on the IDF mission to locate and destroy Hezbollah attack tunnels dug from Lebanon in Israel.

The prime minister listed his accomplishments in office and said he hoped his current religious, nationalist coalition would be the "core" of the next one as well.

The latest polls appear to predict another solid victory for Netanyahu, though an indictment over mounting corruption charges could still trip him up.

Netanyahu's coalition has been roiled by internal divisions for months. Yisrael Beiteinu's  Avigdor Lieberman resigned as defense minister last month to protest what he perceived to be the government's weak response to rocket attacks from the Hamas-ruled Gaza Strip.

Besides the issue of IDF enlistment – it has been obvious for months that it was likely to affect the future of the coalition – the decision to advance the elections came as the criminal investigations into Netanyahu approach the final stretch. Attorney General Avichai Mandelblit convened the expanded team dealing with Netanyahu's cases for the first time on Monday, ahead of a decision on the various affairs.

Senior legal sources say the discussions on the prime minister's investigations will continue as scheduled, despite the elections. However the attorney general will not publish his decision if it made in the immediate run-up to the elections. This is done in order to prevent any accusations that the judicial system is influencing the democratic process.