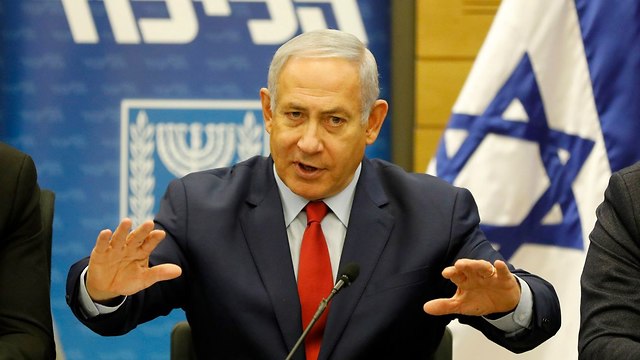 The dilemma of the right

Despite appearances, Netanyahu doesn’t really represent the right-wing camp, which still folds to his every whim; but what will they do if and when the prime minister is actually indicted?

It was not so long ago, August in fact, when Benjamin Netanyahu promised that his Likud party would expand to 40 Knesset seats in the next elections, and other Likud members predicted a veritable windfall of votes. But while the national camp - that confederacy of right-wing Zionists and religious Jews - is set to do well in April, it has a big Netanyahu-shaped problem.

The prime minister has total support from his Likud party, where even political opponents like Gideon Sa’ar toe the line. Similarly, the Jewish Home party says it provides Netanyahu with support from the right and avoids expressing any criticism based on the prime minister’s legal predicaments. The right speaks with one voice, and that voice is Netanyahu's, but is he really their representative? Netanyahu, who once led a right-center party, has managed to appear more right-wing than Jewish Home leader Naftali Bennett during most of this government's existence.

PM Benjamin Netanyahu (Photo: EPA)
Most Israelis identify with the conservative stance of the national camp, and this is illustrated by the polls. If a clueless foreign pollster were to land in Israel, he would most certainly advise a potential candidate to create competition within this vast, unchallenged field. Most of Netanyahu’s political rivals have decided to throw in the towel. They view these elections as abortive — just another way to pass the time before Netanyahu is indicted and the next government collapses. They will compete against each other afterwards, when he's gone. Why will the government collapse? Because there are only a limited number of parties willing to join a coalition headed by a prime minister who has multiple indictments hanging over his head: the ultra-Orthodox, the Likud and maybe Jewish Home, but that's it. What will they do, those on the right who believe that a prime minister cannot serve while under suspicion of corruption, but don’t identify with the likes of the far-right Jewish Home MK Betzalel Smotrich?

What will they do, those who were skeptical that the sensitive security situation, which that precluded elections just a month ago, ended unexpectedly on Monday?

Only time will tell.