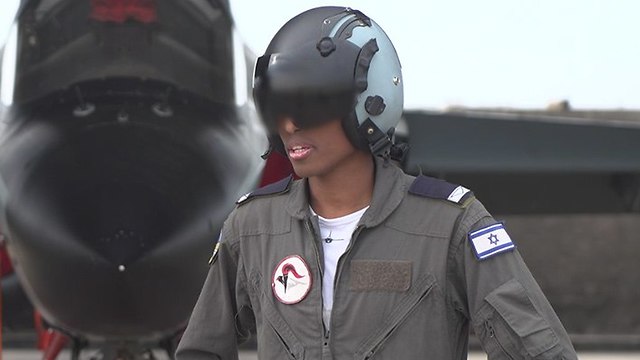 Lt. Y. calls his achievement a 'great honor', says he is just at the start of his journey; Netanyahu and IAF commander praise new airman as trailblazer.

For the first time in the history of the Israeli Air Force, a cadet from the Ethiopian community was awarded his pilot wings on Wednesday, and is to start his active duty as a combat navigator.

“Being a member of the air squadrons and serving in one of the IDF’s most significant units is for me a great honor,” said Lieutenant Y, whose identity remains undisclosed, as with all IAF pilots.

He was born and raised in the center of the country and attended religious schools, including prestigious Yeshiva high schools. He completed all his matriculation exams and was invited to try out for the pilots’ course. He thought the idea was cool, but did not think he would actually pass.

After completing the initial phase of the course selection, he took time off to study at the Bnei David pre-army IDF preparatory yeshiva in Eli for two and a half years.

All he knew before beginning the course were stigmas about pilots — that they were cold, cynical and arrogant. But he quickly realized that "they were no different to other people, sometimes they smiled and sometimes they were upset... I am a social person, I love to laugh and I quickly found my place among the group” said Lieutenant Y.

“As the course concludes, I have mixed feelings,” he continued. “On the one hand it is nice to finally receive our wings after three intensive years of training; on the other hand, it is only the beginning of the journey.”

Prime Minister Benjamin Netanyahu congratulated the new pilots for completing the arduous course during a speech at the 177th pilot’s graduation ceremony, that took place at the Hatzerim Air Base near the city of Be’er Sheva.

Netanyahu then asserted Israel’s determination to prevent the entrenchment of Iranian forces in Syria, and expressed his trust in the IAF.

(Photo: Motti Kimchi)
“The nation of Israel depends on you and I put my faith in you,” the prime minister said. “My mind is always on our pilots. During the wee hours of the morning, I sit near the telephone waiting to hear from my military secretary that an operation was successful and that all our pilots returned home safely.”   Both Netanyahu and Air Force Commander Maj. Gen. Amikam Norkin made statements referring to the IDF’s operation in Syria Tuesday night. Norkin also welcomed the first Ethiopian to complete the course: “Distinguished members of the Ethiopian community are here today, Kessoch, academics and public figures; your presence sends an important message…. I am proud of you Lieutenant Y.