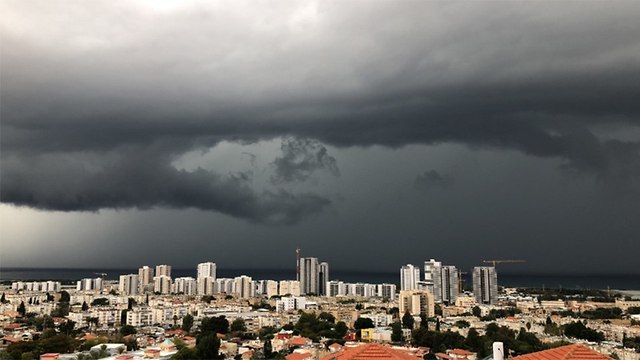 Heavy rain spreads from the north to the center of the country as temperatures drop; snow expected to fall before noon on Mt. Hermon; fears of flooding in eastern rivers

Israel was hit by a particularly wintry day Thursday as heavy rain spread from the north to the southern coastal plain. In the Western Galilee, 14 mm of rain dropped in one hour in Kibbutz Ayalon. Heavy rain also hit the Lower Galilee, the northern valleys, and the Sharon and Dan regions in the center.

Rain showers accompanied by thunderstorms and strong winds are expected to spread Thursday from northern Israel to the northern Negev as temperatures drop significantly. The storm will gradually weaken toward Thursday night.

Hailstorms hit Caesarea, Pardes Hanna-Karkur, and other parts of the Sharon region on Thursday morning. In Dan region, the heavy downpours caused flooding in several streets.

Meanwhile, Mt. Hermon site was closed Thursday due to rainfall and heavy fog. The temperature at the summit is close to zero, and snow was expected to fall before noon Thursday.

The downpours bring a risk of flooding to rivers in the Judean Desert, the Dead Sea and Jordan Valley. Due to weather conditions, Israel police calls on the general public to avoid driving in flooded roads, adjust driving speed to road conditions, and maintain a safe trailing distance.

According to the Meteo-Tech meteorological company, winds in the Mediterranean Sea will reach speeds of up to 70 kph (43 mph), while the waves could reach heights of up to 350 cm (11 feet).

As the storm gradually weakens, the weather will be partly cloudy on Friday, with temperatures lower than usual. On Saturday, rain is expected to fall sporadically and spread from the north to the northern Negev Desert in the south, with a chance of thunderstorms.

On Sunday, rain will spread from the north of the country to the northern Negev, accompanied by occasional thunderstorms. There is a chance of flooding in lower regions, and snow is expected to fall on Mt. Hermon.