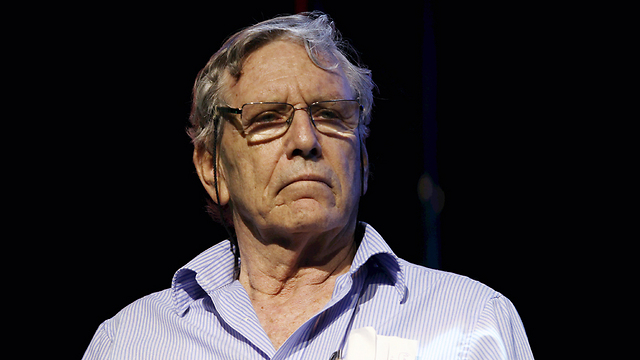 Award-winning writer achieved international recognition for such novels as 'A Tale of Love and Darkness' and 'Black Box'; daughter mourns him as ' a wonderful family man, an author, a man of peace and moderation.'

Amos Oz, Israel's most successful and internationally recognized author died Friday at the age of 79 after a battle with cancer. He is survived by his wife, Nili, and three children – Fania, Galia and Daniel.

"My beloved father, Amos Oz, a wonderful family man, an author, a man of peace and moderation, died today peacefully after a short battle with cancer," wrote his daughter, historian Fania Oz-Salzberger in a tweet posted Friday evening. "He was surrounded by his lovers and knew it to the end. May his good legacy continue to amend the world."

Oz's books have been translated into more than 40 languages, including Russian and . Oz won dozens of literary prizes in Israel and abroad, including the Israel Prize, the Bialik Prize and the Goethe Prize, considered the second most important prize after the Nobel Prize for Literature. In 2018 he won the Tolstoy Prize, one of Russia's most prestigious literary prizes, for his novel 2016 "Judas." In recent years, Oz has been considered as one of the pillars of Israeli literature, culture and society, and as a leading candidate for the Nobel Prize.

President Reuven Rivlin and his wife Nehama expressed their sorrow at Oz's death: "A story of love and light and now, great darkness. Sadness descends upon us as Shabbat begins. A literary giant. The glory of our creators. A spiritual titan. Rest in peace our dear Amos."

Oz is considered one of Israel's leading writers from the second decade of its establishment until his final days. He was among the writers who began to work in Israel's early years and who formed the basis of modern Hebrew literature.

His numerous books were well-received by readers and critics alike. He began publishing in the 1960s, dealing with the history of Israel from the days of the Yishuv (pre-state Jewish settlement), the establishment of the state, and key historical events throughout its existence.

Oz is the author of classics such as the highly acclaimed autobiographical novel "A Tale of Love and Darkness" (2002), and popular works such as "My Michael" (1968) and "Black Box" (1987). His books are compulsory reading in Israeli high schools for matriculation in literature.

Throughout his life, Oz never hesitated to make public his progressive views on political and social issues, first and foremost his concerns about a solution to the Israeli-Palestinian conflict becoming more distant. Over the years he became one of the figures most identified with the Zionist left in Israel. In an interview with the BBC in 2016, he said: "I've been called a traitor many times in my life. I think I'm in wonderful company. History is full of people, men and women, who happened to be ahead of their time and were accused of treason by some of their contemporaries." In the same interview he added that criticism of the State of Israel is legitimate, but that saying "there should be no Israel, that's where anti-Zionism becomes anti-Semitism.

Oz was born Amos Klausner in May 1939 in Jerusalem, the son of literary scholar Yehuda Aryeh Klausner and Fania Mussman. His uncle, Joseph Klausner, was a scholar of literature and history. Following his mother's death when he was 12, Oz spent his youth in Kibbutz Hulda in the midst of an adoptive family - the family of Tel Aviv Mayor Ron Huldai. The landscapes of his childhood in Jerusalem and the kibbutz often served as a background and source of inspiration for his future works, primarily "A Tale of Love and Darkness," which tells the story of his family.

After completing his military service in the Nahal Brigade, Oz achieved a BA in literature and philosophy at the Hebrew University of Jerusalem, after which he studied for a master's degree in philosophy at the University of Oxford. In 1986, he left the kibbutz with his wife and three children and moved to Arad. In his final years, Oz lived in Tel Aviv.