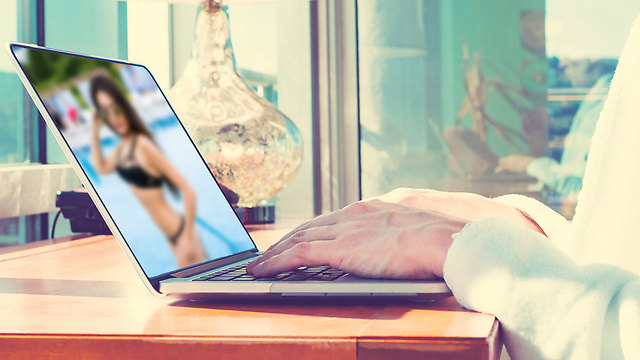 The dissemination of explicit photos and videos of minors online affects children as young as 6, but law enforcement authorities are unable to put a stop to it; a new Knesset study finds that while the law allows jail time for perpetrators, most cases never make it to trial.

It has been two years since Karen (not her real name) met the man who made her life in to a living hell. At first he made a wonderful impression, but unbeknown to her he covered her home with cameras and filmed her in her most intimate moments.

"We dated for several months, and the relationship seemed promising. He treated me nicely and with respect," she says.

When she felt their relationship was fizzling out, she ended it and went on with her life, without knowing that her ex was obliterating her privacy.

File photo (Photo: shutterstock)
When she learned what he had done, her world crumbled. "My friend called and told me there was a video of me having sex that was making the rounds on international porn sites. I thought she was kidding, that this was a joke. I didn't know how I was supposed to deal with this information, or who I should turn to. I felt great embarrassment and wanted to disappear. I was embarrassed and humiliated to the very depths of my soul. I changed my phone number, closed all my social media accounts, and kept a low profile. My entire life changed," she says. Karen filed a complaint with the police about a year and a half ago. According to her lawyer Roni Aloni-Sadovnik, the complaint still awaits the prosecution's decision. At the same time, a civil suit has also been filed. This ugly phenomenon made headlines in Israel recently when sports commentator Sharon Perry's phone was stolen and explicit content from it leaked to social media. Perry courageously spoke out about the case in the media and demanded authorities do their job and stop others from experiencing such trauma. The incident made waves in Israel: a suspect was arrested, prosecuted and convicted, but he fled to the Palestinian Authority and has been evading justice since.

Sports commentator Sharon Perry (Photo: Roee Idan)
"I hope people understand that what they're doing is a criminal offense, more than that, it so deeply hurts one's soul," Perry says. "It's important and necessary to get this issue on the public agenda. Anyone disseminating the videos and photos of these victims must be caught. I know it's not easy to find the source of the leak."

Rotem (a pseudonym) is only 18 years old. Without her knowledge, a video she filmed and sent to her then-partner was disseminated online and even reached a porn site. Rotem filed a complaint with the police, but was told there wasn't enough evidence to point to the person who spread the video online. "When I found out the video had been disseminated, it was a massive blow," she says. "It was a video I wanted to give him and only him. I didn't want it to be out there. For seven months, that video was making the rounds online, and I didn't know anything about it. When I found out and saw the reactions, it was awful. People commented on it and wrote 'How much do you charge for the night?', 'I want to f*** you,' 'How old are you?' I expected the police to do something about it, and it's very disappointing that they didn't."

In January 2014, an amendment was made to the Prevention of Sexual Harassment Law, stating that disseminating explicit and private content online was a criminal offense with a maximum sentence of five years in prison. But the law is not being enforced.

According to a Knesset report, Israel Police launched 643 cases between 2014 and 2017 on the alleged dissemination of explicit and private content online, but 84 percent of them were closed. Most of the cases (71 percent) were closed because "the perpetrator was unknown," while only 14 percent were closed because "the circumstances of the matter did not justify prosecution", and 12 percent were closed due to lack of evidence. Only 108 cases made it to court, resulting in just 17 convictions in three years.

The conference featured representatives from the State Prosecutor's Office, the 105 police hotline to combat online crime against minors, the Ministry of Education, the Justice Ministry's Cyber Crimes Unit, Google Israel and civil society organizations, as well as victims of cyber crime.

"We must fight this horrific phenomenon," Lavie said. "Disseminating a photo or a video is not only an ugly act, but a crime that can ruin a person's life. This is sexual assault to all intents and purposes."

"This little device we have in our hands is a ticking time bomb, which could irrevocably destroy a person's life with the push of a button—and there is no coming back from that," she said. "The combination of strict enforcement and education to awareness starting at a young age will create deterrence and help eradicate the phenomenon."

Two-thirds of the criminal cases involving the spread of explicit and private videos included additional offenses, such as intimidation, privacy violation, sexual offenses, extortion or posting obscenities, as well as assault, serious bodily harm or kidnapping. But even if the offense was "only" the dissemination of explicit and private videos or photos, it is considered a sexual offense to all intents and purposes, and one which could have very severe ramifications for the lives of the victims.

"These are worrying findings," says Dr. Nurit Yachimovich-Cohen, who conducted the study. "This is going on even while there is a significant tool that is supposed to help enforce and prevent the phenomenon."

"The police and the State Prosecution have yet to realize that digital offenses—such as the dissemination of offensive sexual content about a person—spread quickly, and the speed of enforcement must be matched to the speed of dissemination," says attorney Roni Aloni-Sadovnik, who represents Karen in her suit.

"Anyone who posted the video must be caught, even if he's not the first to do so. My client's case has been stuck for a year and a half, even though there is a confession by the suspect saying he did indeed film her without her permission or knowledge. What other evidence is required here?"

Shai (a pseudonym) felt she could no longer bear the reactions of her peers to the intimate photos of her that were spread online and tried to end her own life. She was standing on the windowsill, planning to jump, when her younger brother came into her room and pulled her back.

"When I was in the 8th grade, someone photographed me naked. We were girls, we were messing around, dancing—and she was taking pictures. They were saved on her phone. One day after we had a fight, she sent the photo to my ex, and he spread it through WhatsApp groups and on social media," she says.

Shai felt all alone. She was afraid to tell her mother, and no one close to her knew about the suffering she was experiencing.

"While this was happening, everyone sent me messages. There were boys who hit on me because they thought I was cheap and that I 'put out.' Girls didn't want to go near me because I got a reputation of—forgive the expression—a 'slut,' and they were worried they'd get that reputation too," she says.

"It was really difficult and I dealt with it on my own. At some point it was too hard, and I wanted to kill myself, just jump out of the window. By pure chance, my little brother walked into the room. He saw me crying, and I warned him not to tell my mother anything," she says.

Eventually, Shai did tell her mother and the family decided to move to another city so she could start over at a new school. "When I told her, my mom started crying, and she was angry I didn't tell her when it was happening," she says.

In an effort to deal with cyber crimes against minors, the police set up the 105 hotline, which is supposed to provide an initial response to violence and crime against children online.

"Since the 105 hotline was launched in November, there have been 198 incidents of disseminating explicit photos or videos of minors online," says Dr. Nava Cohen, who heads the Public Security Ministry's Division of Society and Crime Prevention. "The age range of the victims is 6-18, and 90 percent of them are girls. The ability to stop the damage is difficult and complex."