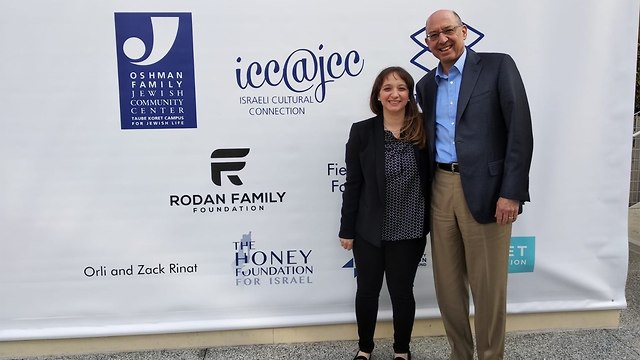 The man who wants to shatter the Orthodox monopoly

Bill Lipsey founded the Honey Foundation for Israel in order to revoke the strangehold of the Rabbinate on religious matters in Israel, and make Judaism accessible for all the country's citizens.

Bill Lipsey lives a comfortable life in the United States. He has a large family, a thriving business and a prominent status in his local Jewish community. But the monopoly on religious services by the Orthodox Rabbinate in Israel disturbed him enough to try to put an end to the marginalization of alternative streams of Judaism.

A few years ago, Bill and his wife Amy decided to invest part of their wealth (accumulated via insurance and management ventures and investments) in the establishment of the Honey Foundation for Israel, a Jewish pluralistic foundation seeking to revoke the monopoly of the Orthodox on religious matters in Israel and to make Judaism accessible for all the citizens of Israel.

Bill and Amy Lipsey (Photo: Limor Rubin)
“We began investing in pluralistic, spiritual, community leadership in Israel two years ago, following the passing of my dad,” says Lipsey. “I am a Conservative Jew and all my life I contributed to the Conservative movement in the US and Israel.” He added that he is interested in creating a spiritual and community leadership even for those who are not associated with any stream of Judaism.

A year in Ra’anana

A decade ago, the couple moved to Ra’anana for a year and they say it was a very meaningful 12 months for them.

“During that year I searched for my place within Israeli Jewish society. It was only natural for us to join the large Conservative community in Kfar Saba where we had friends who were among the founders. Their members took turns leading the community," Lipsey says.

“They chose not to hire a rabbi and as new members we felt the absence. The community model in the United States is that the rabbi ensures participation by all the members,” he continued. “In the meantime we continued searching for belonging and a community and we found ourselves part of an Anglo-Saxon modern Orthodox community in Ra’anana.”

A new York synagogue (Photo: AFP)
He describes that community as one where his family felt at home, where other members would visit their home and invite them to meals and their children would play together. “It was a very strong experience for me.” What’s missing in Israeli Judaism?

“I think that Israelis are not familiar with the non-Orthodox streams of Judaism. They aren’t familiar with the spiritual, theological and humane richness of other streams. The biggest price I believe is in the (absence of) community. I think that the greatest harm caused by the Orthodox monopoly is the secular and traditional public’s lack of community institutions and spiritual leadership.

“Many Israelis don’t feel a connection to their Judaism because they don’t find themselves among the Orthodox. They lack variety outside of orthodoxy, not because the other streams are not fit for the Israeli reality, but because they don’t receive any funds and they have been struggling to survive for years.”

Israelis not free to choose

Lipsey points out that despite all the above, there exists thriving communities and amazing spiritual leadership among the secular, Reform and traditional population. “I cannot bear the thought that if you live among the Orthodox, you will have a community, belonging, meaningfulness and spiritual guidance, but if not, it is a huge struggle. It isn’t right.

“I don’t believe that Israelis are truly free to choose. One who chooses not to be part of Judaism because he isn’t aware of all the other amazing options isn’t really choosing; it is ignorance and a travesty. If people are exposed to the rich variety of communities and means of living rich Jewish lives but they choose another way, I fully respect that. But lack of knowledge and state preference and billions of shekels in funding for one faction for 70 years is not free choice.”

The pluralist section of the Western Wall (Photo: David Shechter)

One of his main goals in establishing the foundation is confronting the lack of equality with regards to funding and support for Jewish matters in Israel. “Most Israelis only encounter the issue when they need religious services such as weddings, funerals etc… Only Orthodox and institutions leaders receive salaries and funding. Jewish cultural funding has become Torah cultural (funding). All this affects the lives of Israelis in ways they cannot fathom. Being part of a community of bicyclists is great but (it isn’t) the thousands-years-old Jewish culture and tradition. I believe that we all have spiritual and community needs. We are human, and meaning and belonging are basic human needs.”

What is the solution?

“Allowing Israelis to build communities and develop professional quality spiritual and community leadership that will allow them to thrive. I am a Jewish American who believes in the free market. I believe that the community must choose its own leadership and be built in an organic grassroots manner.”

Lipsey points out that just like the Orthodox, the Conservative and Reform movements, as well as the modern Orthodox, believe that they are maintaining Torah and true Jewish tradition. “I personally believe that a variety of thriving Jewish communities are crucial… When the Rabbinate takes control (of community life, education and culture) that is when there are instances of corruption, inequality, and lack of transparency.”

Lipsey says that he supports any spiritual leadership, whether Conservative, Reform, Orthodox or secular, as long as it contributes to the richness of Judaism in the country.

(Photo: Reuters)
How do you feel about the Western Wall and conversion controversies?

"I think these measures are destructive to the connection with the Diaspora, but I decided to stop being angry and translate the frustration into creative work and support for the wonderful Israelis we work with who want to create the change from the bottom up."

Among other things, he contributed to the recent Z3 conference in Palo Alto, attended by 1,000 Jewish and Israeli leaders and representatives from France and Britain, dealing with the future of the connection between Israel and the Jewish world. The conference was initiated by the JCC and the Reut Institute (a policy think-tank), led by Gidi Grinstein. "David Brooks of The New York Times says ‘we now live in a world of unlimited options. This is the most amazing time to be a Jews. We have a strong Israel and a strong Jewish Diaspora for the first time in the history of the Jewish people.’ I believe that if Israeli society is more pluralistic and inclusive of all Jewish streams, it will undoubtedly strengthen the connection with the Jews of the Diaspora," Lipsey says.