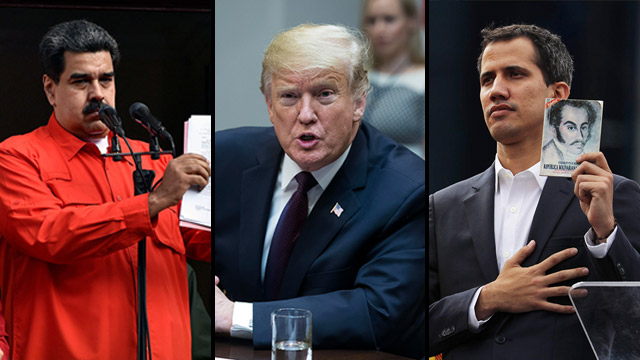 Showdown in Venezuela as US backs Maduro rival's power claim

Juan Guaido, the new leader of the opposition-controlled National Assembly, declares himself interim president, gaining support from US, Canada and a dozen mostly Latin American countries; in response, President Maduro cuts diplomatic ties with US; at least 7 protesters killed in the escalating confrontation with Maduro.

Venezuelans headed into uncharted political waters Thursday, with the young leader of a newly united and combative opposition claiming to hold the presidency and socialist President Nicolas Maduro digging in for a fight with the Trump administration.

Violence flared again Wednesday during big anti-government demonstrations across Venezuela, and at least seven protesters were reported killed in the escalating confrontation with Maduro, who has been increasingly accused of undemocratic behavior by the United States and many other nations in the region.

Juan Guaido, the new leader of the opposition-controlled National Assembly, turned up the heat by declaring himself interim president before a mass of demonstrators in Caracas. He said it is the only way to end the Maduro "dictatorship" in Venezuela, which has seen millions flee in recent years to escape sky-high inflation and food shortages.

"We know that this will have consequences," Guaido shouted to the cheering crowd, then slipped away to an unknown location amid speculation that he would soon be arrested.

Venezuelan opposition leader Juan Guaido during a protest in Caracas (Photo: Reuters)
In a united and seemingly coordinated front, the US, Canada and another dozen mostly Latin American countries—including Brazil, Colombia and Argentina—quickly announced that they supported Guaido's claim to the presidency.

Supporters of Venezuelan opposition leader Guaido protest in Caracas (Photo: Reuters)
President Donald Trump promised to use the "full weight" of US economic and diplomatic power to push for the restoration of Venezuela's democracy. "The people of Venezuela have courageously spoken out against Maduro and his regime and demanded freedom and the rule of law," he said in a statement. Maduro fired back by breaking diplomatic relations with the US, the biggest trading partner for the oil-exporting country, and ordering American diplomats to get of the country within 72 hours. Washington said it would ignore the order.

The socialist leader, who so far has been backed by the military, as well as the government-packed courts and a constituent assembly, recalled the long history of heavy-handed US interventions in Latin America during the Cold War as he asked his allies for support.

A support rally in Caracas for Venezuelan President Nicolas Maduro (Photo: AFP)
"Don't trust the gringos," he thundered to a crowd of red-shirted supporters gathered at the presidential palace. "They don't have friends or loyalties. They only have interests, guts and the ambition to take Venezuela's oil, gas and gold."

Venezuelan President Nicolas Maduro at a support rally in Caracas (Photo: AFP)
On Thursday, attention will shift to Washington, where diplomats at the Organization of American States will hold an emergency meeting on the Venezuelan situation. The debate promises to be charged, and the National Assembly's newly picked diplomatic envoy will be lobbying to take Venezuela's seat from Maduro's ambassador.

Meanwhile, many Venezuelans will be looking for Guaido to re-emerge and provide guidance on the opposition's next steps. The armed forces' top command, which has so far remained silent, is also expected to issue a statement, although nobody expects the general's loyalties to Maduro to have shifted.

The price of oil slipped for the third time in four days Wednesday, an indication that international energy markets are not overly concerned yet that the situation in Venezuela—America's third top oil supplier and owner of Houston-based Citgo—will disrupt global crude supplies.

Supporters of Venezuelan opposition leader Guaido clash with security forces in Caracas (Photo: AFP)
Tensions began ramping up earlier this month as Maduro took the oath of office for a second six-year term won in an election last May that many in the region contend was not free or fair because his strongest opponents were barred from running.

The 35-year-old Guaido, a virtually unknown lawmaker at the start of the year, has reignited the hopes of Venezuela's often beleaguered opposition by taking a rebellious tack amid Venezuela's crushing economic crisis.

He escalated his campaign Wednesday by declaring that the constitution gives him, as president of the congress, the authority to take over as interim president and form a transitional government until he calls new elections.

Raising his right hand in unison with tens of thousands of supporters, he took a symbolic oath to assume executive powers: "Today, January 23, 2019, I swear to formally assume the powers of the national executive as president in charge of Venezuela."

The assault on Maduro's rule came after large crowds gathered in Caracas waving flags and chanting "Get out, Maduro!" in what was the biggest demonstration since a wave of unrest that left more than 120 dead in 2017.

Supporters of Venezuelan opposition leader Guaido protest in Caracas (Photo: EPA)
There were no signs that security forces heeded Guaido's call to join the anti-Maduro movement and go easy on demonstrators. Hours after most demonstrators went home, violence broke out in Altamira, an upscale zone of Caracas and an opposition stronghold, when National Guardsmen descended on hundreds of youths, some of them with their faces covered, lingering around a plaza. Popping tear gas canisters sent hundreds running and hordes of protesters riding two and three on motorcycles fleeing in panic.

Blocks away, a small group knocked a pair of guardsmen riding tandem off their motorcycle, pelting them with coconuts as they sped down a wide avenue. Some in the group struck the two guardsmen with their hands while others ran off with their gear and set their motorcycle on fire.

Supporters of Venezuelan opposition leader Guaido clash with security forces in Caracas (Photo: Reuters)
Meanwhile, four demonstrators were killed by gunfire in the western city of Barinas as security forces were dispersing a crowd. Three others were killed amid unrest in the border city of San Cristobal.

Supporters of Venezuelan opposition leader Guaido clash with security forces in Caracas (Photo: EPA)
Amid the showdown, all eyes are on the military, the traditional arbiter of political disputes in Venezuela—and to which Guaido has been targeting his message. On Monday, a few dozen national guardsmen seized a stockpile of assault rifles in a pre-dawn uprising that was quickly quelled, although residents in a nearby slum showed support for the mutineers by burning cars and stoning security forces. Disturbances flared up that night in other working-class neighborhoods where the government has traditionally enjoyed strong support, and more violence was reported Tuesday night.