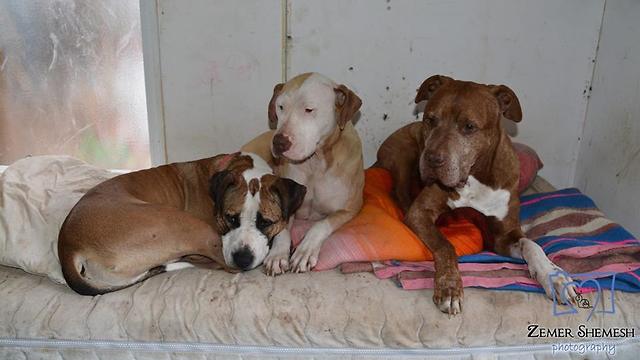 The 'angel of dangerous dogs’ pleads for help

Yuval Mendelovitz travels far and wide to save severely abused pups, many of whom were rescued from a brutal life of dog fighting; now, heavily in debt and fearing for their future, he is asking for aid to keep his animal sanctuary open.

For years, Yuval Mendelovitz has rescued and rehabilitated hundreds of dogs from a life of brutal fights and neglect, but his benevolence has landed him in heavy debt, and he now is battling to keep his farm— with its 100 canine residents from destitution.

Mendelovitz has been rehabilitating dangerous dogs that would otherwise be put down for the past 16 years. He finds them in regional quarantine facilities, veterinarian clinics and in households; hurt, neglected and severely abused— and there’s no one else to try to give these dogs a second chance.

The majority of dogs at the farm are pit bulls and Rottweilers, considered dangerous under the Dangerous Dogs Act. "But we also have some Canaans, and one tiny, half-blind Chihuahua, that Yuval found wandering at the beach," says one of the volunteers who helps out at the farm, who asked not to be identified. "He plays with the pit bulls, he's a super cool oldie!"

Calls come in regularly, sometimes on a daily basis, revealing information about abused dogs in immediate danger. They are rescued from far and wide, and from difficult and criminal circumstances. Mendelovitz declines to reveal specific details of how they get these dogs out, fearing it might hamper future rescues.

After more than a decade of moving from place to place with the dogs he had saved, Mendelovitz was recently able to establish the farm, which relies solely on donations and volunteers. But now, he is struggling to make ends. He usually asks for public support on Facebook, but it’s never enough.

Mendelovitz has set up a Paypal account, which he hopes will provide a lifeline for the rescued dogs.

One of the farm's recent success stories is Noam, a brown pit bull found in a landfill site. The security guard at the site called Mendelovitz, and the two saved Noam from being attacked by the other dogs in the grounds. Noam was tied up with a leash, covered in infected cuts and bruises, with a leg injury that required expensive surgery.

Today, Noam has a loving forever-home, but it isn't simple rehabilitating these rescued dogs. "It varies from dog to dog," says the volunteer, "but it mostly takes lots and lots of love, petting and hugging them all the time, and then slowly incorporating them into the dog pack and socializing them."

Rehabilitation of dogs has its price, and Mendelovitz does get bitten sometimes during the process. But eventually, most dogs become a part of the happy pack.

"Some dogs need five or six years of rehabilitation, and some will never be able to fit in a home and will stay with us for the rest of their lives," the volunteer says. "No dog will leave for adoption if it isn’t ready for it."

And what type of person takes in a dog deemed dangerous by law, after it's been through abuse and dog fights? "There's no fixed type," the volunteer says. "They're just good people with a lot of compassion."

“I live among them like a traveller, with no electricity or even a shower,” says the man widely known among animal rights activists as “the angel of dangerous dogs, “all to give them a chance to fit in again.” But now he is facing a terrible truth: “I might finally have to give up and let them be put down,” he says.

The Environmental Protection Ministry said in response that the farm was never registered as an NGO and thus never received funding.

“The ministry supports some 30 animal rights NGOs every year, to the tune of NIS 3.7 million. We see the NGOs as important partners in the promotion of animal welfare in Israel,” the ministry said.